It used to be that every time I heard “vibrant community,” I thought of vibrators. I like to read the literature that art organizations publish about themselves, so I used to think about vibrators a lot. Sadly, I recently learned that when the mission statement, or the proposal, or the crop dusting report says “vibrant,” it actually means “vigorous, full of life.” Huh? 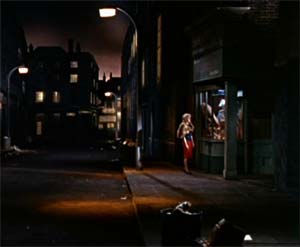 “Vibrant community.” Buzzwords exist to obliterate reality, so what’s getting obliterated here? Could it be that the art community is not “vigorous, full of life?” Bingo! Our sickly, paralyzed art community. Our bed-ridden, sore-covered art community. Pustulent. Cramped. Mortified. Necrotic. Deathly ill art community. Gosh, I’m feeling better already! It’s amazing how productive it is to invert every single sentence, even the catch phrases of the art-death system. It’s all lies!

It’s the same with prostitutes. That’s what somebody told me. You ask a prostitute if he or she “has anything” and they’ll always say “No.” They’ll yank the bent, borrowed U-100 needle out of the webbing between their first and second toes, spit a little blood, cough a few times, blink their crusty eyes, and say “No. No way. I’m clean. I’m clean, baby.”

“Whores lie!” my friend Reed used to exclaim. “Whores lie!” They say whatever they need to say to get what they want. Can you imagine a prostitute, or even just an out-of-control sex addict, answering that question “Gee, who knows? I’m such a slut and I never use protection. Is that a problem?” It’s no easier to imagine a funding proposal that says “We’re part of an alienated, mediocre art scene, crawling with scabby posers and itchy wanna-bes. We tested positive for Acquired Academic Schlock Syndrome and it’s likely we have grant-fever. We probably got it from using a toilet seat right after some curatorial peckerwood!”

The art scene’s “vibrant” because a bunch of 13-inch lies keeps getting vigorously shoved into it by the self-appointed gatekeepers. The pimps! They try to control everything, they think they are Art, and they need to keep their budgets flowing.

There’s the mandatory positive attitude that turns everybody involved into lying whores. Then there’s the relentless organizational drives to indoctrinate and fleece ever bigger, ever stupider audiences, which brings in truckloads of idiots who should never set foot in an art scene. Worst of all, there’s the namby-pamby, pussy-wussy, indiscriminate art boosterism that suffocates everything potentially worthwhile.

Sickly. Pustulent. Necrotic. Maybe we need to bleed the patient. He looks a little pale!

Creating art is making decisions and investing everything in them. This idea, this aesthetic, this social sculpture is good, and that one is bad. These decisions don’t just matter in some white-cube vacuum chamber. They connect to all the good and bad, all the dreams and nightmares of the human race.

Promoting all things arty swamps reality with phony art-crap. Right in the place where a real art scene would be. Its like we’re all sitting in an endless parking lot that used to be a Houston Toad habitat, joylessly pretending to celebrate the existence of that nearly extinct critter with a big display of Houston Toad key-chains, t-shirts, bumper stickers and coffee mugs. “If only we had more parking lots! How vibrant it all could be!” Ribbet.

“Vibrant.” It’s on the bedside table, near the coke mirror and it keeps buzzing because nobody turned it off. It stinks, so maybe it’s time to stop licking it. I don’t want to be part of a vibrant community. I like to lie still. I like to look and think, not to vibrate. I think vibrations should be absorbed by padding.

Let’s think about changing “vibrant” to “whaling.” Then we could be a whaling community. A lot of whales will die, but think of the wear and tear we’ll save on our orifices.

Objects in the Mirror is a new weekly series of editorials by Clark Flood.