Ernesto Pujol at the McNay

"Deeeaaaad people, deeeeaaad people," chanted my eight- and nine-year-old daughters with their friend Anabelle. We were driving down a dusty country road that led us past the Tehuacana Cemetery. The graves belong to early settlers who died from an outbreak of smallpox. 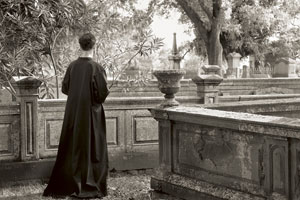 "When we were little," explained Anabelle, "we used to go to ballet, and we always passed graves, and that's what we shouted every time." Her playful take on death relieves me. The place she was talking about, the Sunset Funeral Home, precedes miles of gravestones popping out of unnaturally green grass. Shiny black hearses and flower wreaths indicate celebration, a twisted party that the honoree doesn't attend.

"We went to the same ballet classes, and I remember passing those graves," I said, feeling jealous that Anabelle's mother managed to cleverly bypass any death discussions because of her kids" Scooby Doo associations. Back then, I didn't know the too much information rule: when it comes to children, just answer the question directly, nothing more. Instead I mistook the opportunity to inform my daughters, dressed in pink tutus with their wispy blond hair pulled into buns, of the dreaded underbelly of life: someday we die. And we end up in graves. (But not me: I want to be cremated.) I had managed to keep death a secret until the route to ballet brought up the question. Then only three and four years old, they sounded very disappointed, but soon forgot all about it.

On the ranch road, a big white pickup headed toward us in a cloud of dust. "We're going to die!" shouted my two-year-old with no concept of the meaning. It sounded horrible to hear that coming out of her mouth, but she was just copying her older sisters, who scream this every time we pass a car. In their game, they imagine we will crash into it head-on, unknowingly recreating a fatal wreck that actually did occur to my friend's father, an incident which haunts me on every country road. 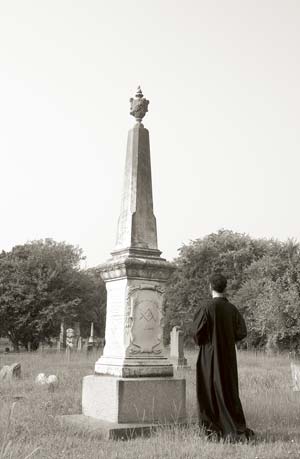 Later I drove in from the ranch to see Ernesto Pujol's exhibition at the McNay. I wanted to support René Barilleaux, the new curator of art after 1945, in his first show. René told me that Ernesto planned to do one of his "walks," but I knew nothing about his art. The invitation sent out reminded me of the book cover of Midnight in the Garden of Good and Evil, the difference being the presence of Ernesto himself, a mysterious, monk-like figure robed in black, photographed so that we only see his profile from behind, gazing at tombstones.

When my friend Alexis and I arrived, René told us about the exhibition of Ernesto's work in the Brown Gallery. "Go take a look, then what he does might make more sense to you." Black and white photographs hung on the walls of the circular room. Somber and solitary, the images showed Ernesto staring at more headstones. Taken from behind, the shots frustrated me because I couldn't see his face. What was he doing there? Why did he visit graves?

I felt as if he had some kind of personal mission, and that he allowed the audience to witness it through his art. My thoughts then wandered into the territory of his personal psychology. Did a parent die when he was very young? Or did he lead a past life that he slightly remembered?

The repetitive images of Ernesto staring at graves made the endeavor more solemn, so that the work became less about the content of the photographs and more about Ernesto being earnest. The sense of vulnerability stemmed from a kind of double voyeurism, the first belonging to Ernesto, who documented himself visiting the graves, and the second from my own voyeurism, peering over his shoulder from behind because that is the way Ernesto framed the images.

As children, my mother taught us not to step over the grassy area where the body lies, screeching at us to come hither, and be respectful. I still feel timid about approaching a stranger's headstone, like I am somehow invading their space, a breach similar to opening the someone's medicine cabinet, or looking into someone's purse.

The graves Ernesto had visited — big ancient tombstones set amidst varying landscapes of huge palms, wrought iron and old trees — look nothing like my grandparents" plot. In their contemporary cemetery, simple tombstones cover the landscape, along with fake flowers, ugly vases and sometimes balloons. My great-grandfather ordered the white marble for the headstones from Italy. The tall monument got dirty — not in a mossy, Deep South or European kind of way, but blackened and polluted, so the family had to hire someone to come out and clean it. 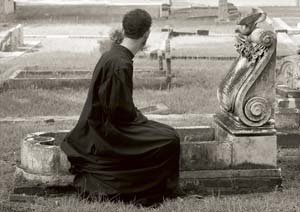 I found out later that the setting for Ernesto's photographs was Magnolia Cemetery, a Civil War cemetery outside of Charleston. He just happened to visit the place, on a curator's suggestion, and he just happened to pack a black robe as well. So he put it on and then went on a thoughtful walk through the grounds with a photographer in tow. "This series is not about my self-portrait, but about a collective need to mourn at this time in history," he writes. In that light, his actions become a kind of artistic sermon, directing our thoughts to the violence of days gone by and that of today as well.

Ernesto's black robe stood in the middle of the room, stiff and upright, as if he were in it. It seemed to spell out for us the role the robe plays, cloaking his gloomy visits with respect and keeping the realm sacred. But the theatrical nature of the photographs — Ernesto's poses, the setting, the costume — also seemed like a masquerade, a sentimental depiction of grief. What was the personal connection? What made it real versus a Victorian postcard?

We walked along, looking at the romantic images accompanied by various words written on distressed mirrors and framed in black. The words, such as "dear," "far," "close" and "distant," seemed empty. Did they refer to the now passed souls of the people in the graves? Or did they refer to the inscrutable boundary of death? "I don't feel like I'm giving this work enough time," said Alexis, "but I don't want to miss the performance."

"Well, the good thing about the performance is, we might finally get to see his face," I responded as we walked out to the McNay's big fountain. The performance had started. Ernesto, dressed in a white robe with white stockinged feet, was slowly making his way around the circular brick-coursed patio in front of the Marcia and Otto Koehler fountain.

It takes resolve to appear ethereal and icy cool in blistering heat and surrounded by spectators. The uneasy audience jostled for shady spots. Lots of the McNay's elderly docents had come and now sat patiently on the benches. "This is supposed to take 30 minutes," said my friend, 'so we better get comfortable." People stole embarrassed glances at one another. One woman who wore dark sunglasses fanned herself incessantly with the brochure.

Round and round Ernesto walked. I realized that even though we did get to see his face, it was covered in white makeup, along with the only other exposed flesh, his hands. Ernesto was very thin, his brown hair cut short and long sideburns reaching down past his ears. I detected earring holes but no earrings.

He muttered as he walked and looked down almost the entire time, never once making any eye contact with the audience. His lips moved silently, but he appeared to be in conversation rather than in prayer. Eventually, I began to surmise that he had an invisible person accompanying him on his walk, because he made sidelong glances to his left and used his left hand to gesture while his right hand held up his long robe so he wouldn't trip. Who could he imagine himself to be talking with? The spirit of Mrs. McNay?

As I gazed at Ernesto's simple cotton robe, I wondered how he made it. Did he use a big white banquet tablecloth? He had picked a scenic spot for his walk. Brides and their entourages stood a comfortable distance away, surrounded by relatives and photographers holding equipment. They stared curiously as they waited for their chance at the picturesque zone that Ernesto was hogging. One girl in a pink tulle quinceañera dress took a feisty stance under a nearby palm tree and tried to stare him down, but Ernesto in his trance-like state didn't notice.

The sun hadn't yet set, so the sound of water cascading offered little relief from the heat. I wondered if Ernesto used waterproof makeup. The longer I looked, his hands appeared more corpse-like. I tried to play tricks on myself, so that when he reached the part of the circle where the sun shone most brightly and the white robe almost glowed, I could imagine him disappearing, slowly metamorphosing into another dimension.

Several people got up and left. Two different cell phones rang and people rushed to turn them off because it felt like church. What is it about performance art that makes people cringe? Trepidation seems built into the medium itself. When people use their actions and their bodies as the art, without an inanimate object to hold the symbolism and meaning, the air gets charged.

In the awkward silence, I decided the cringe factor also came from brushing up against the mystery of another's psyche. The curtain of sociable behavior gets lifted away, and something vulnerable gets exposed. In theater we can blow off the discomfort as fiction, but performance art carries the burden of truth. The artist wishes to convey something, and the moment of translation either happens or it doesn't. Or it happens for some and not for others.

Ernesto finally ended the walk by heading "offstage," away from the audience and down a staircase flanking the fountain. So that was it. That was all he was going to give us. Several people said they wished he had jumped in the fountain; because they were so hot, they would have joined him. 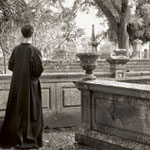