Gunter Von Hagen invented the technique of plastination — turning body tissue into something stable and not smelly which can be used to make anatomical displays. His institute has a donor roster of 6,800 individuals lined up to give their bodies. Many of these have already died. So the bodies I saw at Body Worlds at the Museum of Natural Science, H-town, were willing volunteers. 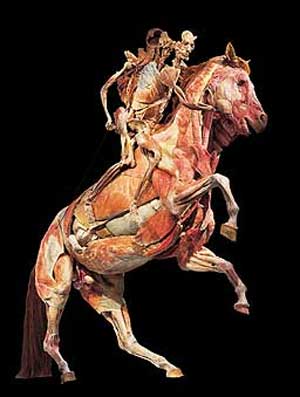 I saw a similar show in NYC. It was mounted by the copycats bedeviling Von Hagen’s enterprise and befouling his name. They stole his process and his ideas and made exhibits with similar sounding names. They buy bulk corpses from various places, like China, which has been accused of filling such orders with executed political prisoners.

There are a lot of these shows going around. Some are Von Hagen’s and some are not. I expect the PC thing to do is make sure the one you plan to attend uses volunteers, not prisoners. It’s like reading labels at Whole Foods to see what’s really inside.

It’s sad, the kinda riff-raff you end up rubbing elbows with when you develop spectacles involving human corpses. To me, even the moral high ground seems a tad swampy. Color me wuss, but when you start messing with human body parts you’re literally opening a big can of worms.

They sell these shows as Education. Sure, I learned that my esophagus is a narrower channel than I thought, and I really need to chew my food more and stop treating that tiny, delicate little stomach organ like a medicine ball. Yes, I looked at some dissected feet and realized I probably didn’t have a broken bone in my foot after all. Hell, in NYC I got to see a diseased, blackened smoker’s lung sitting next to a pink, healthy, non-smoking, executed political prisoner’s lung. I learned, I discovered, I got informed.

But Education is just a stiff wind skirting an awesome tornado of Art. The Art knocks you down. There are four flayed corpses sat at a table playing cards. Education doesn’t really explain that, does it? Art. It reminded me of Dangerous Liaisons at the Met, only without the period rooms, the period costumes or skin, and substituting human corpses for mannequins.

There’s a guy with all his tissues rolling upward off his limbs, lifted like Marilyn Monroe’s skirt in The Seven Year Itch by the wind of some necrotic subway. Art.

There’s a flayed guy split down the middle like a macheted mango. He’s riding a flayed horse which rears back to flaunt the most spectacular of the many remarkable flayed penises on view. The guy’s holding human brains — not his own, which are clearly visible in what’s left of his skull cavity — in each hand. Art! My first take was that it was an autobiographical metaphor for the artist himself, riding forth like Paul Revere to bring us a sensational warning that our besieged revolutionary consciousness has a physiological substrate that can be removed and played with by persons of superior social status. Sorry! That was ignorant! Now I understand they were volunteers.

No matter how the corpses were acquired, the antecedents for these works are to be found on the arty edges of serial killing. Ed Gein‘s shoe-box full of human vulvas, painstakingly harvested from graveyards and spray-painted gold and silver, springs immediately to mind. I have long been saddened by the unavailability for viewing of this masterpiece of outsider art. Laugh if you must, but I’m not kidding.

Let’s never forget Jeff Dahmer‘s decision to dedicate his life to the pursuit of pure evil. If you had a nickel for every time you heard that in the art world, huh? But the result of his vow was an Art project, an altar made of human skulls, grant-friendly but sadly incomplete at this writing.

Even the marginalized Boston Strangler artfully arranged his victims in tableaux oddly reminiscent of the work at hand. What was that Richard Serra quote? “you’re only as original as the obscurity of your sources.”

Its time to admit that the dividing line between art and crime is a big gray quagmire. Fine distinctions are surely lost on the compulsive, excitable customers we herd through public exhibitions like cattle. Park the hillbilly values at the door — valet if you must. Moralities of convenience fit contemporary Americans the way CAM‘s Perspectives series fits Core Fellows.

I know its Art because I recognize that these crazy “displays” were made in that state of exhilarated intoxication artists enter when they discover a new technique. I also know that when I’m in the creative frenzy borne of new ideas, I’m not thinking about morality or the niceties of public reception. When I’m creating something new — and only new media creates something really new — I’m God, and I don’t care what the crybabies below are pouting about.

Saw this in Dallas as part of a biology class field trip. 15 year old me didn’t know a thing about art, but thought this show was really cool. There was a sign up book at the end where people could put down info to potentially volunteer as body donors (the chaperones hurried us past). We didn’t learn much about biology, but I remember being in awe of the process I imagined for everything’s construction. The rooms were dark and things were spot lit. All very theatrical, mystical art dungeon / wunderkammer-esque.