The first weekend in May saw more openings in San Antonio than even the diehards could swallow, but some downtown and southtown standouts, particularly non-Texas artists, should be noted. 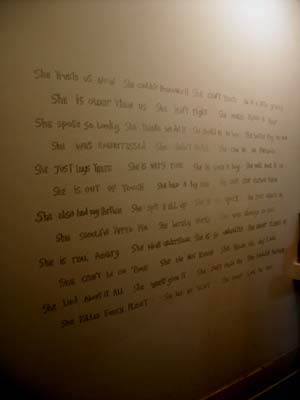 Sala Diaz performs a red rover and brings Transformer over. In 2004, the intimate experimental D.C.-based gallery exhibited the work of San Antonio artists Chuck Ramirez, Jesse Amado, and Andrea Caillouet in sub-TEXT. This time, The Sala Diaz/Transformer Exchange Project rounds itself out with three D.C. artists, Breck Brunson, Nilay Lawson, and Solomon Sanchez, who infiltrated Sala Diaz's duplex with an expansion of their show Long Distance Relationship. Organized by Transformer co-directors Jayme McLellan and Victoria Reis, the show brings together three artists who all graduated from the Corcoran College of Art and Design in 2002. They have been frequent collaborators ever since, and it shows in the way their work hangs together, like old friends whose thoughts are so compatible that not everything need be said.

How is one to interpret these objects? Sanchez includes a list of clues in his artist statement: 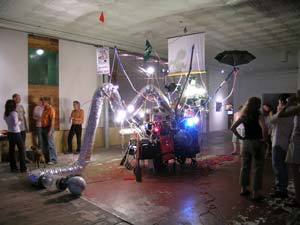 It seems that the tightly-organized, reddish crystal is its own entity as well as a square on the Periodic Table of Elements. The meat jerky and fleshpot game seem more about preserving the surface than what is underneath.

Nilay Lawson and Breck Brunson share the next room. Lawson's work feels the youngest, perhaps because it is so personal. A small, cheesily framed portrait photo is doctored with another image of herself. Called Me and Me , it's supposed to be Lawson from the past with her arm around Lawson of today. Unfortunately the color is off and one of the Lawsons has a grey face. Nor do they look very different from each other, negating any Dorian Gray effect. But the artist used to live in Texas, so she may just be saying howdy to her old self while she's here.

Much better is She She She , a series of punctuation-less comments the artist has collected on subways and on the street, and then penciled on the wall in the hallway. One small section reads:

These qualifying statements are strung together on a poetic clothesline that leads one to think about our use of language and judgments of others.

Breck Brunson seems like the one who lets D.C. seep into his work the most. For his installation sound piece, then there's sound pollution, and I don't even like that song , Brunson paints one corner black and hangs a squat metal trashcan. Sounds come out of this, the sampling and distortion of 54 songs about time and place. It feels like an urban portrait of street life where bad music duels with nearly every passing car and boombox left out on the sidewalk.

A Four Star Re-Union involves a collision of two black Styrofoam airplanes joined at their cockpits. Hanging on the wall, and set against grey carpet cut into the shapes of clouds, this piece is also the one that really seems to be thinking about long distance relationships, namely airplanes in flight on 9/11. Even his somewhat tame “guerilla act” of signing up Transformer and Sala Diaz for subscriptions to Jet Magazine comes close to touching on old fears about checking our mail and flying, fears that disrupted our long distance relationships. 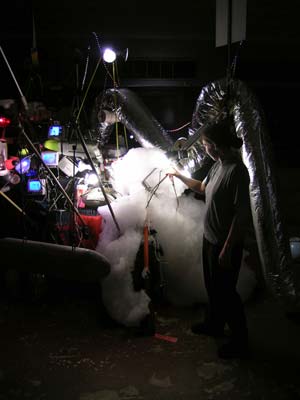 Budd's best friend may be his hot glue gun. With it, he welds together plastic toys, working telephones, mannequin limbs, vacuum cleaners, and other everyday objects into lumpy cocoons that sit on the floor. These aren't attractive to look at per se, but they have character and do good works. His central creation, Bon Voyage Kinesthesia de Pileon , sprays bubbles with shimmering rainbows, emits fog like a rock concert, pops your popcorn, gives off multiple scents, and captures your image with a nanny-cam. Made to look like wonky pirate ship, Budd tops off his sculpture with a portable film-screen-as-sail, a mermaid flag, life preserver and oars.

In her essay for the show, Davy associates Budd's work with what Jerry Saltz calls the "Clusterfuck Aesthetic." As Frankensteinian mounds of detritus, they can be a lot to take, but then suddenly you see something in them, like a person with great eyes or shiny hair. I had that moment when I saw miniature candy canes encased in a clear plastic bubble, and again at the sight of a sterling silver tray with perfumes. So sweet.

Budd's real game is to play on the senses, pushing them to overload. Music from a keyboard in the viewer-activated "Audition Room," video, smells, tastes, and multiple textures all lead up to something. On opening night, when the fog was pumping, silhouettes of friends moving about became shadows. As the room filled up, the piece crescendoed.

A new set of works revealed a more traditional aesthetic, with ornate frames and museum lamps attached. Inside, ski masks are immersed in hot glue. Red paint behind the translucent gel turns the background a Silly Putty pink. The masks hint at commando art, or possibly even terrorist props. But the green and yellow of Like Father Like Son: Junior reminded me too much of the 1970s Steelers knit caps to be frightening. Like his sculptural conglomerations that play off the waste and convenience addiction enabled by big box conglomerations, these works are both dark and playful. 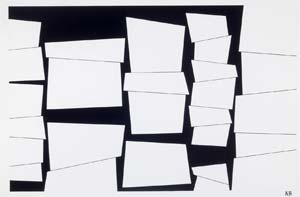 Lawrence Markey Gallery also shows the early work of a young artist. When he made the drawings now on view at Markey's, Karl Benjamin, now 80, was still a few years away from participating in the landmark group show Four Abstract Classicists , which opened at the San Francisco Museum of Modern Art in 1959. Works such as these garnered the use of the term "hard edge" for the first time by British curator and critic Lawrence Alloway when the show traveled to England and Ireland. This exhibition also marked the introduction of "colorforms" on the international scene.

As a reaction against Abstract Expressionism, California artists Lorser Feitelson, John McLaughlin, Frederick Hammersley, and Karl Benjamin neatly compartmentalized color. Looking to modernists Piet Mondrian and Josef Albers rather than Willem de Kooning and Jackson Pollock of the emerging New York School, they rationalized their surfaces by making them precise and controlled, all the while experimenting with color and form in a way that would have made the Bauhaus proud. In fact, many of their patterns recall fabric and textile designs of émigré designers such as Ilonka Karasz during the 1920s and 30s.

How did Markey score such early, intimate works on paper? It helps if you took painting classes from the artist at Pomona College and have remained friends ever since. This seems to be Markey's method of operation: love the artist, love the work, and make shows of integrity and quiet beauty.

Most of the drawings are about the size of a sheet of notebook paper and each has a sketchbook quality, with pencil lines often left behind as visible bone structure. Abstract patterns in India ink range from curvilinear forms dancing across the page, unfurling like little scrolls in Floating Forms (1955), to straight-edged examinations of the outdoors in Chino Hills (1957) and Cityscape (1956).

There is a good mix of pattern among these works, connected by their black and white color and sense of the artist's hand as he outlines and then fills in the forms with light-catching ink. Mondrian I and II are grids with legs around which the page's blank air circulates. An untitled drawing from 1956 jumbles like stacked cups while another from two years later is the lone example of Op Art.

Benjamin's drawings are stark compared to the colorful paintings that he still makes today, which resist the trend for unblended edges in painting, such as Aaron Parazette and other younger artists are known for today. Even the windows of Soloman Sanchez at Sala Diaz are derived from this sort of cubist exploration.

Catherine Walworth is an artist, writer and curator currently living in San Antonio. 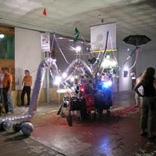