Dallas' Plush Gallery just turned six years old, and the kids are alright. The median age of the artists who show at Randall Garret's DIY soul-funk labor of love can only be slightly higher than the state's legal drinking limit, but a trip there makes for a fast rundown on late-breaking trends, tactics, and art-world take-downs. You are guaranteed to see some cool (if at times squirrelly) shit. 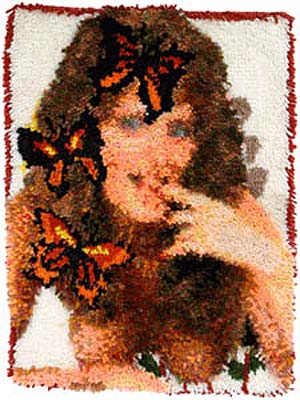 Location: weird. You go downtown, to where you see more chilling vagrants and cops than yuppie urbanites (which is refreshing). After a year in Dallas living just south of Downtown, I realized I'd never actually walked anywhere down there, despite daily drive-throughs. Much less had I an excuse to head into the Manor House apartment building, past the helpful front-desk lady and the mirrored elevator up to the fourth floor, where under bad lighting you walk over questionable carpet and along dated dark oak baseboards, to suite 403. A Steppenwolfian magical mystery tour. I almost felt like I needed some password, or a secret sign.

Inside, the space is just three small rooms. I caught Garrett and friends watching cartoons in the small office. Open really only on Saturdays and by appointment, the gallery acts as much as an operation base camp as public venue. Taking advantage of and influenced by the shifting global art environment, Garrett is on the move, heading out every few months to an art fair in Miami, Chicago, or Houston. Popping up around the larger art fairs like fungi, 'secondary" (or "parasite") venues often offer a more raucous and meaningful art experience than their billion-dollar forbears – the Armories, the Basels, the Miami Basels. It is to these smaller fairs that Garrett, and scruffy art impresarios of his ilk, take their wares.

Plush's gallery space is something of a throwback to early modern galleries, like Alfred Steiglitz's 291, where, instead of some huge pristine white cube, you were more likely to encounter a fifth floor walk-up apartment offering a few discreet objects d"art. In such a setting, the art is definitely thrown back on itself, unable to rely on being pulled up by spiffy surroundings. 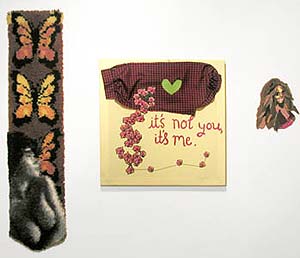 The current offering is grrllzztuff: Donna Huanca, Whitney Lee and Breanne Trammell. Fresh out of school or headed right back in, they're all three pulling out needle, thread and yarn and joining the reclamation of "female" craft techniques that began 30 years ago, but has reached a near fever pitch. If I have a complaint, it is that I may have reached saturation point with knitting and needlepoint as conceptual gestures. That said, I genuinely like all the work on offer. Lee latch-hooks soft-porn images of women, sometimes into preexisting thrift store finds, other times starting from scratch. I was particularly amused by the kits for purchase, where you can latch your own naked babe of choice. The idea of latch-hooked porn images by a former Women's Studies major is almost too cliché to bear, but they actually work.

I was glad not to feel beat over the head by any obvious Judy Chicago or Barbara Kruger rant, but instead be gently cajoled, seduced even, into reappraising these images with their beautifully pixilated dots of dye-saturated yarn. Seurat would have changed media had he seen them. They are further removed from preciousness with original backgrounds of butterflies and Christmas landscapes left to provide an alternate, kitschy universe for the girls to inhabit. The male gaze is given a thorough shakedown at the door. 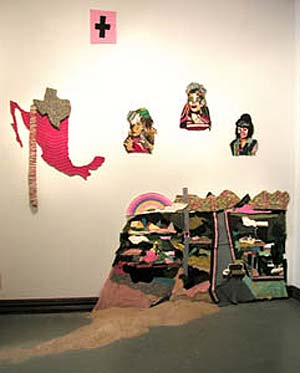 Donna Huanca's installation Ciudad Juarez, composed of six parts, is a tactile adventure south of the border. Seemingly taking as many aesthetic cues from Mexican folk dresses as from High Art precedent, this is a narrative art that avoids a neat read, and like Mexico itself spins a magical fable without a clear beginning or end. Art should leave you a lot of room to move. While it references and decries the horror of the disappearances of hundreds of young women there, you don't feel preached at. The lament here is gentle and inward, sewn stitch by stitch into the pieces.

Breanne Trammell is soon to head off to RISD for her MFA. Taking some cues from Tracy Emin, she stitches found fabrics together into tacky mosaic couch covers and wall hanging "paintings." Further sewn, printed on, glued, glittered, and painted, there is an operative girly nostalgia that we're witnessing a lot now. Her decisions are good ones, helping transcend the sense of having seen it all before, and the pictures are compellingly composed and built. I'd like to see the work in a few years, when the trendiness (lose the images of 60s housewives!) is further drained away and her smart visual style can be more rigorously shown off.

The front room has leftover built-in shelves from a previous tenant, and they are sparsely populated by little works by other Plush artists. I particularly dug Matthew Steinke's tiny Grave Digger, a 2 inch figurine of said workman. Mary Benedicto's if I was king was another highlight, with its found object statue in front of her own digital mandala. It's good to check in and see how the up-and-comers are responding to a new digital century, after the end of art. There's a lot of looking backward, for technique, style, and content. But in the I pod age anything goes, and it's all just about getting the right, balanced mix. Plush should be flagged "frequent" on our playlists 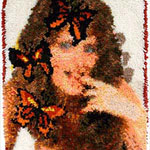