True Believers: The Gospel of Lead

A dead-end hallway, papered with burgundy floral wallpaper, is the first thing one confronts upon entering The Gospel of Lead . Although not quite long enough to deceive viewers into entering, this narrow corridor leading nowhere is an apt metaphor for the exhibition: our inability to find a way out of cycles of violence is an issue addressed by both Dario Robleto and Jeremy Blake, whose work blends together in the half-light of this collaborative exhibition. Even so, The Gospel of Lead comes off very much as Robleto's show. 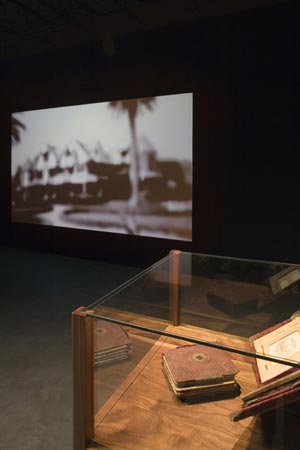 Reviving a long-standing tradition at Arthouse, curator Regine Basha invited Robleto to select another artist with whom he would like to show his work. Robleto, currently based in San Antonio, chose a Los Angeleno whom he had never met, but whose work he admired from afar. The feeling was apparently mutual, which is not surprising since the two have a lot in common. Both artists use history as a material for their work, including tangible artifacts as well as stories, both mythological and biographical. Each recently finished a trilogy, which were even begun and completed at around the same time. Blake's Winchester Trilogy , a suite of three digital animations, was most recently exhibited at the San Francisco Museum of Modern Art in a one-person exhibition. Southern Bacteria , Robleto's answer to the concept album, began at Inman Gallery in 2003 with Roses in the Hospital / Men Are the New Women . Parts II and III opened simultaneously in Los Angeles and Paris in 2004: Southern Bacteria at ACME and Diary of a Resurrectionist at Galerie Praz-Delavallade. Selections from both trilogies make up the core of The Gospel of Lead , which is surprisingly cohesive considering two unrelated bodies of work are intermingled throughout the show. 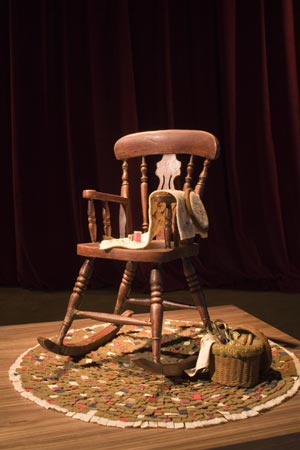 This effect can be attributed in part to the artists' transformation of Arthouse into a haunted mansion based on the Winchester Mystery House, a 160-room architectural marvel built in San Jose, California by the widow of the notorious gun manufacturer. Sarah Winchester began construction in 1884, and made continuous additions to the building until her death in 1922. Her building project was driven by Sarah's belief that she could appease the ghosts of those killed by her husband's guns, and forms the basis of Blake's film trilogy.

One part of Winchester appears in each of the three rooms built by the artists. Part one, Winchester (2002), combines black and white photographs of the mansion with color-field animations that ooze and morph into silhouettes of rifle-toting gunfighters. Blake's creepy soundtrack infiltrates work by Robleto installed in this room. Especially haunting are the antique “spirit photographs” included in Robleto's Diary of a Resurrectionist (I'll Be Waiting for You) and A Mourner Learns To Relinquish The Lost . These types of photographs were thought to record supernatural manifestations during the nineteenth-century, although most were either the result of intentional manipulation or a happy accident. Here, they seem to be objects that Sarah Winchester would have appreciated as scientific proof of her delusions. The photographs are mounted in albums made with Robleto's characteristically long list of materials, which reads like a recipe for a magic potion: cast and carved bone dust, dehydrated bone calcium, crushed amino acids, melted vinyl records of Jackie Wilson's “Lonely Teardrops” and Irma Thomas" “Time Is On My Side/ Anyone Who Knows What Love Is (Will Understand),” homemade paper made from cotton and bone dust from every bone in the body, fragments of soldiers" personal mirrors, spirit of ammonia, myrrh resin, copper, mica, water extendable resin, rust, pigments, velvet, bone glue, and typeset. The importance of the viewer's knowledge and understanding of these ingredients is expressed through laminated gallery guides provided by Arthouse, which take the place of wall labels. The fact that these materials are not apparent but literally embedded in the objects has troubled critics of Robleto's work, but within the context of this exhibition the artist's esoteric media take on particular relevance: “medium” is the materials an artist uses in creating a work, but it is also a substance through which something is carried or transmitted, or a person who can convey messages between the spirits of the dead and the living. 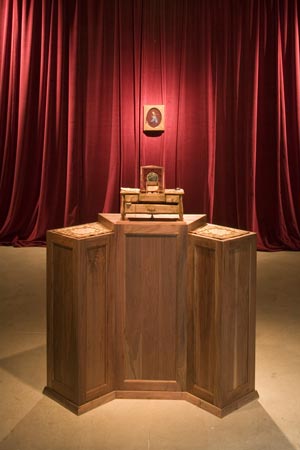 In the second gallery, a rocking chair, a paper dress, and a singularly macabre flower basket signal a move into domestic space, which is reflected in the focus of Blake's 1906 on the Winchester House's interior, especially portions of the house damaged in the earthquake of the video's title. The animation in this sequence is particularly dazzling, with intensely hued threads of color variously emanating from a keyhole with a human face, cracks in a wall, and a glowing chandelier before morphing into shifting patterns that overtake these images of existing objects. In 1906 it becomes apparent that Blake's affinity for psychedelic patterns has a distinct counterpart in the Victorian Era, with its appreciation for bright colors and mesmerizing designs.

Robleto's No One Has A Monopoly Over Sorrow sits in a case adjacent to 1906. A lace-lined basket is filled with flowers woven from human hair, five lead-coated fingers, each of which wear a wedding band, and wax-dipped flowers from wedding bouquets. Leaving the fingers aside, it's the hair flowers that get me. The fact that these are authentic cultural artifacts is key to Robleto's project, but their very authenticity is disturbing; no widow ever intended her memento to be made into someone else's artwork. At the same time, there seems to be a surfeit of such things. Perhaps it is better to have them delicately gathered in a basket, hanging in a museum, than to let them molder in the back of someone's dresser drawer. Maybe we can even describe Robleto's reuse of mourning art items as subversive of such nostalgic impulses, which seem bound up with wanting things to be exactly as they once were (Civil War re-enactments, women dressed in reproductions of Victorian-era mourning clothes), rather than accounting for our changing relationships with artifacts that recall past traumas and traditions. Still, there is a part of me that does not want to see these hair flowers transformed. 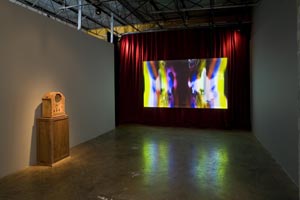 The third room is all sound; however, Blake's Century 21 and Robleto's Vatican Radio don't quite vie for auditory attention, since one or the other is alternately given prominence through carefully calibrated volume control. The radio plays a mix of the broadcast of the first number being called in the draft lottery of World War II, and Marvin Gaye's “Sexual Healing,” along with church bells and choirs. Juxtaposed with scenes from Hollywood Westerns and pop-culture images of cowboys in Century 21 , the climax of the exhibition is a sensory overload that comes closest to actually combining Blake's and Robleto's work.

Both artists take an empathetic attitude towards their subjects, as well as considering another aspect of empathy – the transfer of feelings and emotions to an object. As part of a healing process, Robleto's keen interaction with mourning art quite literally embodies this idea. He takes this concept even further with The Creative Potential of Disease , a doll originally made by a Civil War soldier who lost his leg in combat. The soldier's self-portrait is a coming to terms with his new condition as an amputee, an articulation of his transformed body. Robleto asks if healing is possible through other means, and through time, by giving the doll a new leg. This gesture represents a key idea that runs throughout Southern Bacteria , the subject of which is a time-traveling soldier who has suffered through all American wars. In his search for redemption, he goes back through time in an effort to make things right. Sarah Winchester's ever-expanding mansion is also a result of what Basha calls “the productive impulse driven by the madness of longing and mourning,” but the sincerity of Robleto's project is less evident in The Winchester Trilogy . Blake maintains a greater critical distance that at times comes off as ironic and even superficial through comparison with Robleto's work. Nevertheless, this is by far the most substantial exhibition Arthouse has mounted in quite some time, hopefully a sign of things to come.

Amanda Douberley is a PHD student in Art History at UT Austin, and a regular contributor to Glasstire. 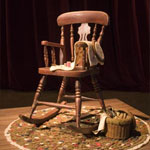