Scanning the radio on the way to Austin, I find a station that's playing songs about people long dead. The concept is to find out who died on the specific date of the show, and then play songs either about them or by them, if they were musicians. First, they play a rock song about Henry VIII. Then they talk about Jackie Wilson, who they say had a heart attack on stage, went into a coma, and died eight long years later. They play "Lonely Teardrops." 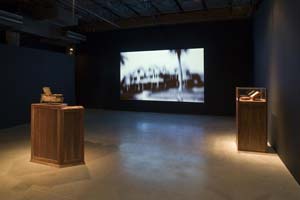 I park two blocks away from the show. I am feeling shy and uncomfortable about talking to anyone. That's why I don't get there sooner. When I arrive, it's crowded. I see Sue Graze, Arthouse's Director, but I don't know if she knows who I am. She directs me to a chair up front that's empty. I see Regine [Basha, the show's curator] and Dario Robleto, and wave hello. I check out all of the Austin types in the audience. The Austin style is to be very thin, unkempt, have dark hair and vintage clothes that don't match, with maybe a pair of super nice shoes or a little bag from By George, so mod it passes for vintage too.

I have to sit through the talk without having seen the show since I didn't get there sooner. I've never seen Jeremy Blake's work before. As I listen to him talk, I decide he is a California cool dude, definitely straight. He puts on his Ray-Bans during the last part of the talk. He has a dark beard that gives him a gruffer, more outdoorsy look, but I think it hides how handsome he really is.

Dario looks dapper. He wears nice leather shoes that have city references to boots, but which are maybe Italian. A dark jacket, a dressy shirt. He still looks young. Dapper and sharp.

Regine doesn't look nervous about talking and she's not. They have trouble with the sound, there's lots of feedback. Dario asks about his mic, “But is it bothersome?” It is, a little. 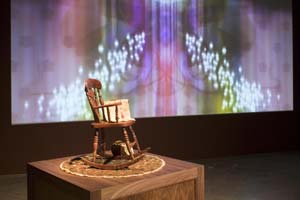 I've never heard of the Winchester Mansion, which is what Jeremy Blake's work is about. He says he hopes he doesn't come across as anti-war, that he means for his work to help and commiserate with those who have experienced trauma. When it is over, I stay and watch the videos for a long time, and am awed by his work, but I wonder about how it may help traumatized soldiers. I think that's wishful thinking. Twelve-packs, benefits, good body armor and good mattresses, that's what they want. Jeremy's videos are out-of-this-world beautiful, and the sound kicks ass. It lends an other-worldly, eerie profoundness to the images, which are worthy. I like the beams coming out of a man's eyes, I feel like my third eye is pulsating when I see it. Soooo California. I can see his Cal Art background, John Baldessari, the Light and Space movement, the western and pop references. He found a perfect subject in the Winchester mansion.

Dario talks about his wandering soldier, who travels and suffers through all of the American battles. I don't even know about all of them. He hopes his soldier could somehow palliate Sarah Winchester, her tortured soul and guilt from having inherited a fortune built from violence. She built some huge 160+ room mansion to house the ghosts of everyone who ever died from Winchester rifles.

Dario selected Jeremy to be the artist he exhibited with, because he thought their work really connected, on several levels: they both did trilogies, both about American history. Dario emphasizes the idea of ‘sustained meditation," and I really like that. It reminds me of how he really is one of my favorite artists, because his ideas speak to issues that I continue to think about. Faith, for example. Time, for another.

Sometimes I wonder if Dario is reincarnated. I've just read Cloud Atlas and this is fresh on my mind. I can see Dario as the soldier, and as the rock star, and as a scientist, inventor, con man. He seems too young to be so wise. What's that movie with Leonardo DiCaprio, Catch me if you can ? I mean, has anyone ever really seen Dario grind together bone dust from every bone in the body? I have my doubts. 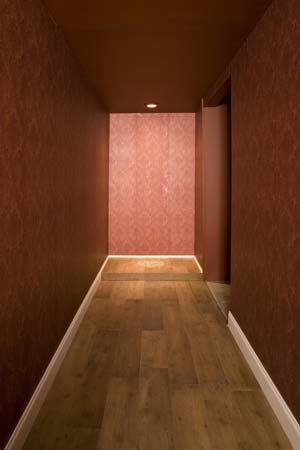 Speaking of doubts, Dario mentioned how doubters have pushed forward American history, like Emily Dickinson or Thomas Jefferson. Doubt and faith are two sides of the same coin. It's just that Dario taps in to what we like to think about and want to hear. His magic is in his formula. He 'samples" not just music but history. People's tragedies. And he sticks to the dramatic and the romantic, like the Civil War. I know I'd like his work even if it were a scam, because no matter what, you can't take away what he dreams up, even if it's not real. But my favorite in the show is this weird little doll made by a soldier from some war long ago that looks like the head is a body part or something, and Dario has stitched it up with real soldier clothes and surgical thread, etc. Also he's made these eyes from all of his weird shit and they are ‘watching" Jeremy's movie. And there's an old civil war field mirror, reflecting back Jeremy's videos. But the videos, how can they see? Feel? It's funny, maybe I project this onto the artists themselves, but I feel the same dynamic between the two guys. I find myself wondering, which one of them believes in ghosts? And of course the answer is Dario (the real Dario, not the con man Dario). The con man Dario plays on our desires to believe in such things. Can he really retrieve ink from old soldier's letters? If he does so, then why? Why does he destroy the artifacts themselves, to taunt us to wonder if he ever really had them? This is what I mean about faith. What we choose to believe.

Jeremy keeps saying, in a really funny way, "that's STEALING," about Dario's sampling. And Dario says, "I wanted to have Jeremy here to sample him, his work. I've never sampled art before, not to sound cold, I mean, I know you're right here." Hmmm. To me, more hints of the other side, the underbelly, of the rapturous historian. He's lyrical and poetic about the past, but his methods are bizarrely and psychopathically cold. Kind of like Silence of the Lambs.

Some of Jeremy's videos seem too slow. I want to walk away, but I stick with it. And Dario's chair and rug seem hokey; I don't care what it's made of. But still, I feel completely transcended by the show. I feel like a time traveler. Like Dario and Jeremy both have decided to give these concepts their thought and energy and consequently a lot of power, and that by giving them this power, they take us back in time. Like we are all taking part in the unimaginable future that these specific pasts tried to imagine. And it is a nightmare, where we are now, looking back at this mostly-forgotten past. "America's amnesia," the artists say. "What about good ol' America?" asks Jeremy, who says he is tired of everyone pretending to be European. That's one reason why he wanted to do the Winchester mansion.

At the beginning of the talk, Sue mentions they had read the day before that the Winchester factory was closing for good, and she says, "What an example that art can change reality." 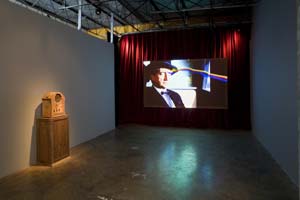 "That's a perfect example of magical thinking," says Jeremy, later on in the talk. Magical thinking came up a lot, because they say trauma victims resort to it (and magical thinking, that's another one of my personal sustained meditations. Dario's entire body of work demands magical thinking on the part of the viewer). "I wonder about the ego of a woman who thinks her actions caused an earthquake," says Jeremy about Sarah. Sarah thought she pissed off the ghosts about a room she built, and that a California earthquake was their anger. Jeremy reduces her to a freak, and I get my feelings hurt for Dario, who I can tell had studied up on Sarah for the benefit of the joint show, and who took her a bit more seriously. He has compassion for Sarah, (he knows, for example, how long she had been trapped in the room during the earthquake, while Jeremy does not). I think Jeremy used her in an more exploitative way; he really is more of a painter. He does visual tangents. Dario does conceptual tangents. But they both twist off, in a good way.

Then there was this really bad burst of feedback at the end, and Regine made me really laugh by saying, about Sarah's ghost, "I guess we made her mad."

And finally, in one of Dario's liner notes about a piece in Room One, I read that there is a melted Jackie Wilson "Lonely Teardrops" record in one of his pieces. Which, of course, leads me to my own magical thinking.

Post script: Two days later at the airport, I have to sew on two buttons that fell off of my brand new expensive jacket. As I sit there sewing, with businessmen walking by on their way to their gates, I feel strangely vulnerable, like I am caught in an act of complete female domesticity. As if I should be doing it at home, alone. I enjoy the sewing, I am set on the task, and I realize after poking myself once with the needle how patient and careful I have to be. I think of all of Dario's stitching, and realize all of the time and care he puts into this stuff is a healing and redemptive process, a trying to make it all better, a small act of recovery, of creation and remembering, that is truly art, and very sincere. 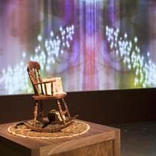