At the age of 37, Scott Barber was diagnosed with N.H. lymphoma. In April, 2005, he passed away due to complications from a bone-marrow transplant. As both memorial and celebration of this artist, the MAC has invited his friend and gallerist Barry Whistler to curate an exhibition of Barber’s paintings and sculpture, tracking his work from 1995-2005. 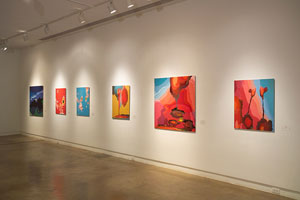 Scott Barber...Installation shot of the galleries at the MAC...

In conjunction with this show, Barry Whistler Gallery is showing Barber’s works on paper. These exhibitions reveal not only the final years of a very talented painter; they also serve as a snapshot of painting concerns over the past ten years.

Barber spent a good deal of time in Japan, first when he was stationed there as a marine and later through a series of visits. As Charissa Terranova points out in her essay for the accompanying catalogue, Barber picked up on the contemporary Japanese aesthetic made so famous by Takashi Murakami and his followers. Bright cartoon-y colors that are at once acid and playful fill these paintings like clouds of chemically infused candy.

In a sense, they pull from both the form and the subtext of Japanese playfulness. In post WWII, Japan emerged not only from the horrors of Hiroshima and Nagasaki but also the guilt associated with its imperialist past. Inundated with reconstruction money from the West, Japan quickly became an economic giant, fueled in large part by an economy based on new technologies. Newness was infused with possibility but always haunted by an undercurrent of shame. In many ways, Manga comics embodied a culture obsessed with the adolescence of each individual and society as a whole, both sexual and psychological, on the cusp between the innocence of childhood and the moral ambiguities of adulthood.

Barber’s early paintings are playful, but it is hard to look at them without the knowledge of his death. This is a reversal of Japan’s dialectic between innocence and darkness. It is just one of many dialectical tensions that bubble under the surface of these images.

A second aspect of Barber’s paintings is the relationship between flatness and space. In his paintings from the late 1990s, Barber constructed surreal landscapes with colors that are suffused with an almost anemic white glow. He painted many of these paintings on a material used for parachutes, to get a surface that would be smooth and flat. At the same time, he used color, through overlap, value contrast and aerial perspective to carve out pictorial space in these images.

There is a tension between the materiality of these paintings, their origins in the viscosity of paint, and the desire to erase any trace of their making. This is a thoroughly modern dialectic that was being resurrected by a new attention to color field painting in the late 1990s, especially in Los Angeles by painters like Monique Prieto. But it was put at the service of imagery without the utopian march toward absolute abstraction. In this sense Barber’s early paintings have more of a relationship to the work of Amy Sillman or Carrol Dunham, two artists influenced by Philip Guston, an artist who used humor in his late paintings to balance between figuration and abstraction. 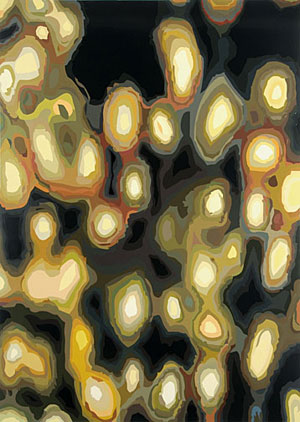 Half way through the exhibition, the paintings begin to be made using vinyl stencils. It is here that the imagery makes a huge shift. With all of the edges equally treated, the color becomes deeper and more saturated. At first, the imagery still sits within the realm of landscape, but soon Barber experimented with the microscopic terrain of natural phenomena. With an eerie forecast to the future, Barber made a series of paintings based on the HIV virus. It’s not that he had any personal relationship to HIV; he was simply interested in its form and the relationship that it suggested between abstraction and nature. With the HIV series, the paintings are for the first time not bound by gravity. By yanking out the ground plane, Barber was free to treat the entire surface of each form with emanations of color.

He later trained this same eye on his own cancer cells, making some of the most mature and evolved works in the exhibition. It is here that we see another marker of not only Barber’s life but also contemporary painting. Many of these stencil paintings were worked out with digitally manipulated preparatory images — a practice that many artists have increasingly taken advantage of. His good friend John Pomara described his studio as littered with ink jet prints that served as drawings. This conflation between nature and artifice, public and private gives these paintings their power.

Scott Barber will be missed, by those who knew him and by those of us who have only known his work. For myself, an example of the latter, I wish that I could have known what the next step would have been. But given his deep investment in the continuum of art making, through webs of influence that touch on modernist and postmodernist abstraction, the interplay between photography and painting, and the balance between playful and powerful imagery, his voice exists in thousands of paintings that still have yet to be made.

Noah Simblist is an artist and writer who lives in Dallas and teaches at SMU. 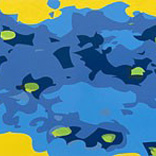