I'm alone in Sala Diaz on a quiet afternoon. In the center of the room, a phantom plant blooms. The wind gusts outside and sunlight glistens through the plant's clear leaves, where photosynthesis is supposed to happen. 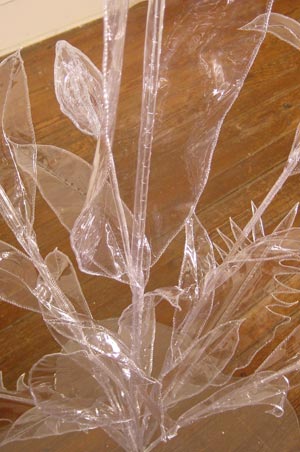 Leigh Anne Lester's hand-sewn, sculptural plant, made from clear vinyl, carries tropical echoes of banana leaves and birds of paradise. I consider what's missing: color, smell and substance. Robbed of life, the sculpture instead remembers it, like a skeletal remain. The art fabricates, with formal beauty, a thwarted version of its reference.

In the next room, Lester's ghostly botanical drawings refer to genetic modification. The five graphite on Mylar drawings, framed in white, seduced me even though I knew I was liking the suggestion of something potentially monstrous. Drawn in by their beauty, I participate in their strange fantasy, which feels like a nightmare or a warning dream.

They point, with quiet subtlety, to a practice that remains vague. I've seen the “non-GMO” label at Whole Foods. I've heard about the contamination of local, native varieties of Mexican corn by US genetically modified corn, a weaker plant, described as pale, less sweet and uselessly resistant to pests and diseases not even found in Mexico. Are the corn tortillas we eat made from genetically modified plants? How does that affect our health?

The drawings' indistinctness mirrors my lack of clarity on the subject. I am enticed by the layers, which confuse and complicate the composition. Though Lester centers the plants on the page, leaves and root systems trail out in all directions on each layer. The strange Frankenstein plants seem unnatural and arbitrary, as if from a laboratory. They threaten my instinctive desire for order and narrative. The inspector in me examines root systems, leaf arrangements, blooms, and tubers. I search for hidden fruit. Vague memories of my scant plant knowledge float to consciousness: toothed margins? Trifoliolate? Could that be a strawberry plant behind those mushrooms, or maybe clover? 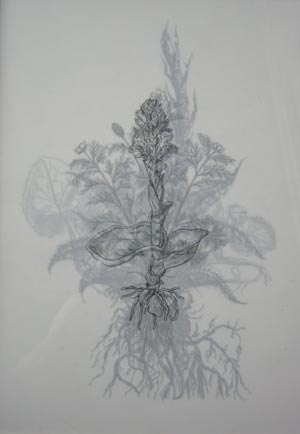 Lester sets the viewer up for this, because the inherent complexity of a plant, exposed and unearthed, demands scrutiny, as does the documentary nature of the plant as specimen. A fogginess, caused by the layering, hides her technique (did she draw on the back of the paper?) In truth, it's four layers of paper, featuring drawings traced from new and old botanical sources. Various leaves and root systems overlap, offering a diversity of shapes, jagged beneath wiggly lines, slow languorous curves over tiny detailed roots and leaves.

Mushrooms mix with succulents in an incongruous meshing of forms. Such absurdity constantly appears on TV: starvation in Africa and Emeril on the Food Channel, with one flick of the remote. But nature we trust to stay the same, constant. I forget that evolution is all about change, the constant alteration of a species in order best to survive. The slow march of time veils nature's instability. Now the minutes, hours, seconds flash by at warp speed and we've got emails and text messages and appointments and news…

Looking at the carefully drawn images of plants, time again slows. The drawings' titles reflect the artist's assembling of plants. Lester takes the four-letter increments of the genus and species and builds new words to reflect the combined plants, for example, Cytiangustraanemnusloatiotonees Hyposupealoinemocistrbadesrosais. The jumbled Latin mocks botanists' once-earnest attempts at specificity, and gently suggests the loss of control in our contemporary world, like a man chasing after lost money blowing around in the wind.

Thinking of the Mexican corn as an example, I realize that genetic modification threatens the local and specific, rendering plants useless and ineffectual. A plant's survival depends on successful adaptation to a specific clime — not just the weather but the local threats of disease and the habitat. Even though some fantastic specimens might result, the real threat of genetic modification is the complete loss of flora in a natural setting.

Instead, with nature as commodity, cultivation replaces the natural. Cultivation requires a dependency. Lester's drawings provoked me to consider what “natural” really means in a contemporary setting. To be native allows for a greater potential to survive. Yet we all fall for the illusion of perpetuation. That's what these quiet, initially non-judgmental little drawings whispered specifically to me: consider the future of the tortilla.

Wendy Atwell is a writer currently living in San Antonio 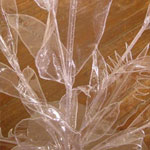