Robyn O’Neil: “Take me gently through your troubled sky” 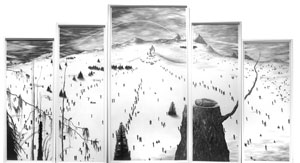 But whether mural-sized or tiny, minimal or baroque in composition, an aura of suspense pervades this work. The large, altarpiece-like As my heart quiets and my body dies, take me gently through your troubled sky is a tour-de-force of technique and scale, but it is the small drawings that show O"Neil at her best, concentrating and darkening the tonal range of her palette to evoke the overlit, overshadowed look of 50s film noir. In strategy, however, her atmospheres owe more to the filmic devices of Hitchcock and Bergman, who used tone to create complicity between viewer and artist without the entanglements of plot. Like the seemingly realistic, highly stylized spaces of these directors, O'Neil's constricted tonalities conjure the oneiric unreality of dreams and nightmares, where events confound linear narratives or ready storylines. 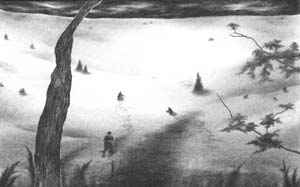 This strategy of withholding catharsis suits O'Neil well, because it forces her to sublimate her symbologies, making make each work meaningful only as a first-person mystery. While she often flirts with melodrama, O'Neil's willingness to be severe saves her work from falling into predictable Surrealistic formulas inspired by Ernst or Dali. Crawling, which bears the grainy blurriness of a film still from a World War II battlefield documentary, captures this sensibility perfectly. The ambience is photographic, but the details are not. The improbably, claustrophobically high horizon line contrasts a sliver of darkened sky with a lighter expanse of field. Within this spare setting, three human crawlers, their backs to us, edge their way from a gnarled foreground tree trunk toward an ambiguous and largely unmarked middle distance. 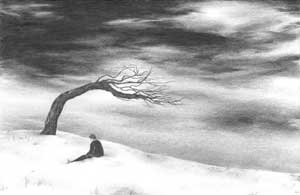 In O'Neil's representations, humanity is as likely to fall from the sky as stand erect; like ants, her people are mostly anonymous creatures who trudge along in snaky lines, or fulfill arcane tasks and communicate through secret exchanges and ceremonies. They take weirdly symbiotic positions vis-à-vis nature, like the ess curve created between the seated woman and windswept tree in Forgetting. Honing in on our increasingly artificial relationship with nature, O'Neil also matches the flow of the woman's hairline to the declining line of the hillside, creating the appearance of a person who has regained her integrity within the landscape by becoming, like a rock, an intrinsic part of it.


Inventions like these place O'Neil in an interesting position to the technique of representational drawing, a classically-based tradition that abstracting Modernism never quite managed to kill off. Until recently most artists who chose this path aspired, like Vija Celmins, to the neutrality of Hyperrealism. Taking literally William Henry Fox Talbot's 1844 declaration of the camera as the “Pencil of Nature,” they acted almost like a camera themselves, using pencils to duplicate the intricacies of the world around them, with the postmodern distinction that they chose to recreate pictures of the world rather than the world itself. While exquisitely detailed, O"Neil's vistas are totally invented, and this combination of patent unreality and potent palpability is one of the things that makes them so compelling — as if dreams could not only be totally recalled but could be revisited in a waking state. 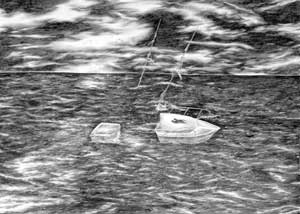 Historical and contemporary art references abound in the many of these drawings, from open citations [The Lost Landscape With Rainbow (based on Caspar David Friedrich)], to compositions and devices that echo the Flemish landscape tradition (The First Disruption, Forgetting), to figures on ships that homage Winslow Homer's boat-bound solitaires (This Man Fell Silent). Falling's mid-air figure is like one of Jonathan Borofsky's flying men, but descending rather than ascending; preparing to impact a desolate plain, he finds his shadow his only companion. I would even be tempted to say O'Neil's darkening worldview is Goyaesque (as in, “The sleep of reason produces monsters”) but no political stance is discernable in her subject matter, only a palpable sense of loss — although exactly what has been lost (life, innocence, freedom, a sense of humanity) remains unclear. Hovering just this side of the grotesque, she manages to convey the apocalyptic mood of Bosch or Brueghel without resorting to monsters and human deformities. O"Neil's voice refrains from moral outrage, alternating instead between lamentation and commemoration.

Christopher French is an artist and writer living in Houston. 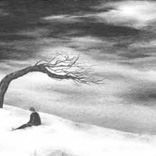