Like a drawer full of mismatched socks, shows like Absolute Destiny Apocalypse make me itch to organize. 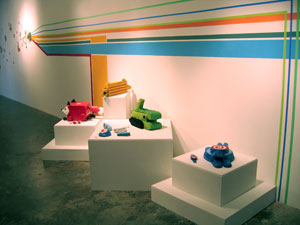 I would re-install the show in half the space; I’d keep the fox, dragon, Lacoste, Hare and Garan Ultra Bastard toys, the LeTigre kiosk and its video. I’d lose the drawings, the LeTigre wall decor, and the two irrelevant other sculptures, and I’d have a tight, tour-de-force of what Jason Villegas can do.

The heart of the show is a set of lumpy, low-tech toys and a video advertising them. The toys are pathetic hand-crafted simulations of slick, hi-tech products, with the earnest, awkward intensity Villegas is so good at. A boxy fox coated in colored plastic tape, a clunky dragon of scrap lumber, a stuffed alligator in grubby green felt all share a witty, sensitive use of commonplace materials. But Villegas doesn’t stop there: the toys are used as characters in an exaggerated apocalyptic mythology, where each has vast destructive powers. The contrast between the pathetic objects and the omnipotent destructive energies they symbolize is hilariously familiar from real toy advertising, but slightly more violent and incoherent. 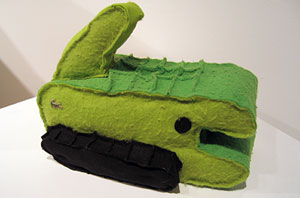 The story is told in Villegas’ awkward, handmade video, A.D.A. Ultras Bastard Commercials, which blares continuously from a kiosk in the corner, overlaying the whole show with a wall of unintelligible gabble. Like his objects, Villegas’ video production technique has a low-tech zest. Jerky collaged cartoons and snippets of grainy captured film all move at a pace which keeps you reeling. Over and over and over the toys are presented as desirable (“Correct dem all!”) and deadly. A bald man shouts at us like an apocalyptic preacher or a Third World dictator as cut-out images of the six toys wink on and off the screen destroying the world with flame-throwers and H-bombs. It’s fascinating and horrible, and the funniest bits are the most cruel: after the words “Hot Items!” a jerky animated flame reaches out of a TV set to reduce three children to cinders. 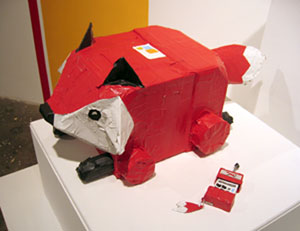 But the show seems stretched; Colton’s cavernous space is ill-suited to Villegas smallish pieces. A wall graphic, the Ultra Bastard Brand Assimilator, attempts to link the widely-spaced objects, video, and drawings, but taping a stripe between things doesn’t make it an installation. The extra space is cluttered with side issues, some good, some less so. One digression, Lacoste Infanticide, is the best single piece in the show: a family of green tape alligators based on the familiar logo. One baby is being devoured by its mama. Cute, but gross. The four drawings are tame; styled like grungy doodles, but without the squirm.

The show is, of course, vaguely critical of global marketing, corporate warmongering, media violence, etc … but Villegas’s real interest is in making industrial products by hand. Like the original pop artists, he seeks to own media culture by recreating it himself, making parodies of products, and parodies of the advertising used to sell them. Then he goes a step further, cleverly grafting his creations onto real media culture by drawing his characters from animal logos embroidered on real shirts, diverting those logos for his own purposes. It’s a juvenile act of defiance in a no-win situation: Villegas can neither beat them nor join them. No artist yet has successfully subverted the mass media, nor has one been assimilated without losing the critical edge that keeps art from being just another branch of the entertainment industry. Juvenile defiance is the only intelligent option. 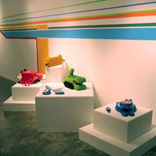