by Otabenga Jones and Associates May 2, 2005
FacebookTwitterEmail

Is it enough just to be invited? We have been trying to get inside for so long, we may have lost sight of why we wanted in. Wait, let me back up. 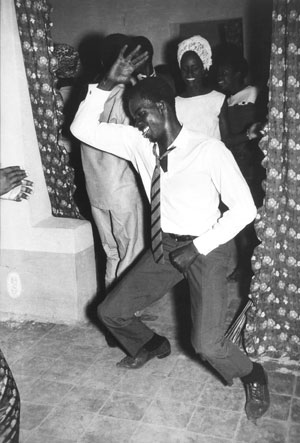 The MFA has brought to H-Town a fantastic exhibition. African Art Now: Masterpieces from the Jean Pigozzi Collection brings to us 33 artists whose mediums range from painting and photography to mini robot factories, to elaborately detailed, stylized coffins. Jean Pigozzi, a Swiss collector with a jones for contemporary African Art, has for the past 15 years (along with his personal curator Andre Magnin), been crisscrossing the continent, finding and purchasing artworks from artists who otherwise might get no attention. It seems Pigozzi stumbled onto this dark territory at the Pompidou in Paris. He toured the exhibition Magiciens de la Terre (Magicians of the earth) during the last day of the exhibit in 1989 and fell in love with the work. Since then he has amassed a huge collection and brought a portion of it here to Houston to share with us. It’s a really big show and everybody seems to be in on it. Five other art spaces in town are also participating by hosting individual artists from the collection.

So this is a huge (and I’m sure expensive) exhibition. It seems the MFAH may be trying to live up to its tagline “A Place for all People.” The diversity is amazing, and I guess that’s what I find so fascinating about the exhibition. It makes me wonder about how Mr. Pigozzi makes his selections. I really, really wish I could have been on those studio visits. Do artists who are virtually ignored by this art world create for this art world? I mean, is exhibiting in the West what they think about in the studio? I’m sure I’m showing my ignorance here, but really, what do most of us know about African artists?

Well, this is a great time to find out. Let’s take the photographs of Seydou Keita and Malick Sidibé. I begin here because I find the most relation. Sidibé’s photos of the youth and club scene of Bamako in the 1960s is eerily familiar. In his images of nightclub dance floors and party scenes with teenagers hamming for the camera, Sidibe’ has captured, very honestly I believe, the rebellious and optimistic nature of youth. I kept thinking of Jamel Shabazz’s book of photography, Back in the Days, which documented the style of early 1980s hip hop culture. Sidibé seems to be working from the same impulse.1. Keita‘s very elegant, formal portraits create a view of Africans very much in contrast to the images we usually see; and when viewed in that context, they are revolutionary. We see how Africans see themselves as opposed to how we see them. Together with his subjects, Kieta has created a beautiful portrait of a community. The clashing patterns of his backgrounds and the traditional dress of some of his subjects seem to harmonize in a visual polyrhythm. 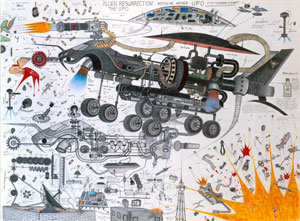 One of the most interesting artists was Georges Adeagbo, from Benin. Although I thought the installation of his works on the museum floor served to minimize their impact (the catalogue photos looked a little more reverential), I believe his pieces were some of the most thoughtful. Adeagbo spends much of his time going for walks. During these walks he picks up what other people have thrown away. When returning home or back to whatever space he would be exhibiting in, he arranges these objects into small installations on the floor. Old T-shirts, empty cigarette packages, boxes and all sorts of odd things find their way into the works. They almost look like altars, except it all seems to be other peoples refuse. I think there is something really existential to the idea of reclaiming someone’s trash, and creating an organized, visual monologue on memory and humanity.

There is a series of large paintings by the star of the show (at least for me), Chéri Samba. Mr. Samba is probably one of the best painters I have seen in a while. His canvasses are big, text laden, and precise. They are bright, colorful self-portraits of the artist as navigator of a discourse on being a successful African painter, the effects of HIV, and many of the social ills in his hometown of Kinshasa. Here is a situation wherein an artist from the African continent is sorting out, via his artistic practice, the complex realities of his homeland. Not coincidentally, this is the point in the exhibition where I begin to sort out the effects of this show on a populace generally ignorant of the Africa’s political and social intricacies. 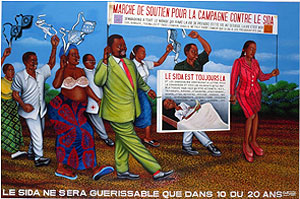 How does this show avoid perpetuating some of the ridiculous beliefs we already hold about Africa? For example, take the title African Art Now. “Now” as opposed to what? Traditional art? African countries are of course known for their traditional sculpture, adornments, and other objects that have been stolen, collected, recollected and (often ignorantly) displayed in most museums. The title suggests we are viewing the present African landscape. What happened in the space between then and now? What was the cause for the change from making objects in line with hundreds of years of tradition, to individuals making unique paintings more in the Western tradition? This show has caused me to question the responsibilities of the Museum as an institution. Should it have to give a history and context for every artwork it displays? Is it supposed to help me unload my baggage when I walk in the door? If so, then it has been poor host during this visit. The title does not differentiate between the 55 countries of the continent and seems to suppose that the 33 countries represented by 15 artists (Only two women? Geez!) makes up the whole of Africa. 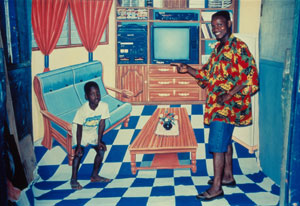 On this point we were sorely disappointed by the lack of context. I must make a comparison with the exhibition The Short Century, Independence and Liberation Movements in Africa, 1945-1994, which was on view at PS1 a few years back. Curator Okwui Enwezor put together an expansive interdisciplinary show, outlining the political and artistic upheaval that happened when colonial rule was being pushed out of numerous African countries. I have to say, leaving that exhibition, I felt a little clearer about Africa, or at least able to connect a few more dots. That’s not to say that The Short Century was a “better” exhibition. But when it comes to Africa, a broad educational component is necessary. Maybe that’s a bit unfair, seeing as how the PS1 exhibition was all about giving context to the past, and this one is about the present. But until we in Houston have learned this history, it’s dangerous to try to interpret the present.

Otabenga Jones and Associates holds as one of its founding missions to “teach the truth to the young black youth”.

1.Rice University Art Gallery, in conjunction with the MFAH, presented Sidibé’s photographs in 2000 in the exhibition Clubs of Bamako.

Otabenga Jones and Associates is a collective living and working in Houston. 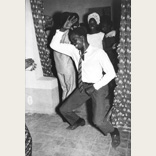