Jane and Louise Wilson are known for their video investigations of institutional spaces, and Erewhon, currently at the University of Houston’s Blaffer Gallery, is no exception. 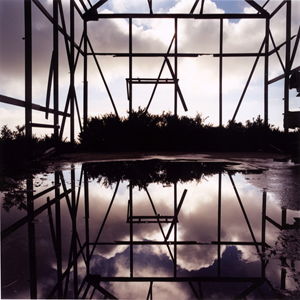 Except that it is. In previous projects, the twins have interrogated the architecture of the Russian space program (Star City, 2000), of after-hours Las Vegas and the Hoover Dam that makes that city possible (Las Vegas, Graveyard Time, 1999), and of the building that housed the East German secret police (Stasi City, 1997). And institutional architecture — in this case, a tapped-out mine and an abandoned sanatorium, the wall text informs us — is, again, the subject of their camera’s contemplative regard in slow tracking and quiet still shots. As with some of their other projects, Erewhon’s five screens and two mirrors implicate the viewer; the arrangement here roughly describes a room, one that becomes slightly claustrophobic during the time it takes to view the video. Surrounded by video, one doesn’t quite know where to look when, which brings its own disquiet. But whereas the twin sisters’ previous video installations were largely devoid of people (in Stasi City, two figures make brief, mysterious appearances), a good portion of Erewhon is populated by about a dozen young women posing awkwardly in a gymnasium, wearing exercise clothing no one has worn in nearly a hundred years.

Erewhon opens with a shot of a grassy passageway between several bungalow-like buildings, with birds singing on the soundtrack. This bucolic mood is fleeting, however, as we jump to an abandoned, dilapidated industrial building and the birds are replaced by sounds of water dripping and things falling. The camera takes us through dank and dismal rooms until it moves outside and pans up the façade to a peaked, tower-like structure. Cut to another interior, the camera looking up into an octagonal tower, with large windows, before making its way through rooms warmed by a golden light. At about this point, we are introduced to the gymnasium and our young women. These two elements — the sun-warmed rooms and the gymnasium — perform a kind of ballet across the installation, alternately vying for attention, until the camera jumps to another abandoned site (also vaguely industrial) set in a wild and beautifully misty landscape. Fade to black.

So what’s the connection between these spaces and these young women? 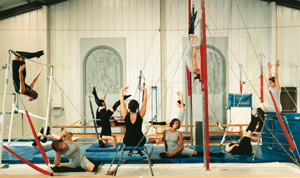 As with the Wilsons” earlier work, the title provides a way in. Erewhon refers to Samuel Butler’s 1872 satirical novel, in which an anonymous narrator discovers a land of that name (an anagram of “nowhere”), generally understood as being located in New Zealand, where Butler was trying his fortunes at sheep ranching at the time. It is a land where the sick are imprisoned and the criminal are hospitalized, where moral and ethical failings are considered temporary breakdowns while illness and misfortune are solely the fault of the ill and unfortunate. Machinery isn’t permitted in Erewhon, either, for fear that machines could evolve until they take over. In short, a kind of reason operates that appears to us (and to Butler’s contemporaries) as unreason, if not madness.

The back story for the Wilsons” Erewhon is the terrible cost New Zealand paid during World War I. Of the 100,444 troops (41% of the 1914 male population aged 20-45, and 10% of the total population) sent by New Zealand to serve the Empire in Turkey and France, 16,697 died and 41,317 were wounded, a 58% casualty rate.1. As with the other combatant nations of the war, this represented a demographical catastrophe for New Zealand. With empty farms and manufacturing plants, empty stores and, with the general decline in economic activity, a decreased tax base, the only bright spot in the picture may have been the rise in nursing opportunities to care for the convalescent, including those whose nerves had been shattered, in sanitariums such as the one visited so lingeringly in this video. This bleeding of the national male population produced a predictable response on the part of institutional power: Darwinian-inspired eugenics (no good deed goes unpunished, and every advance in knowledge offers opportunity for regression). Thus an emphasis on health and exercise and nutrition, especially for young women who may, of necessity, mate with less-than-perfect male specimens. Just lie back, my dear, and think of the Empire… 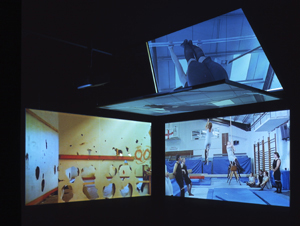 As Cynthia Freeland of the University of Houston’s Philosophy Department points out in her insightful catalog essay, the Wilsons know their Foucault and their Bentham (when the camera peers up into the panopticon-like tower of the sanatorium, its movement becomes almost giddy). While Freeland focuses on the spatial dynamics of power, it’s equally as interesting how the Wilsons have, through their use of the camera, inverted — and subverted — the gaze of institutional power. In Stasi City, the camera seems to float, looking freely and inquisitively into rooms and down hallways where power once controlled all the questions and thereby upheld a dictatorship. In Erewhon, the gaze being interrogated is that of capitalist empire, and there are echoes of Shelley’s Ozymandias2. in the slow tracking shots of the destruction and debilitation of industrial and medical institutions. But, lest viewers start feeling a bit smug, the sisters implicate them in the institutional gaze. The most discomforting sequences of the installation are those of the young gymnasts. Their awkward poses are unsettling (based on photos from the early twentieth century, the duration of these poses mimic the length of time they would have been held to accommodate the necessary exposure times of early cameras), but the young women never look at us, they never return our gaze. And the institutional gaze exerts power so long as it is unseen, hidden by abstractions like “empire” and “eugenics” and, even, “art.” So long as the women do not return our gaze, so long as they do not challenge our claim on them, our place in the web of institutions surrounding them is implicit. 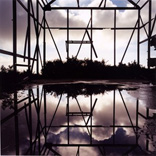