The gallery space is darkened, an unsettling glow emanating from behind the wall that confronts you as you enter. A thin horizontal line of light runs across the wall, drawing you in. You realize that the line of light consists of words. 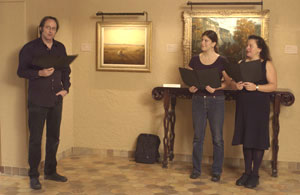 “Over a five month period in 1994, more than one million Rwandans, mostly members of the Tutsi minority, were systematically slaughtered as the world closed its eyes to genocide. The killings were largely carried out by Hutu militias who had been armed and trained by the Rwandan military. As a consequence of this genocide, millions of Tutsis and Hutus fled to Zaire (now Congo), Burundi, Tanzania and Uganda. Many still remain in refugee camps, fearing renewed violence upon their return home. One Sunday morning at a church in Ntarama, four hundred Tutsis were murdered by a Hutu death squad. Gutete Emerita, 30 years old, was attending mass with her family when the massacre began. Gutete’s husband, Tito Kahinamura, and her two young sons Muhoza and Matirigari, were killed with machetes before her eyes. Somehow, Gutete was able to escape with her daughter Marie-Louise Unumararunga. After weeks of hiding, Gutete has returned to the church in the woods. When she speaks about her lost family, she gestures to corpses on the ground, rotting in the sun. I remember her eyes. The eyes of Gutete Emerita.”

Drawn by the glow and a low industrial hum, you step around the wall to find a giant horizontal light box – a light table, really – covered with photographic slides, thousands upon thousands of them, piled into a massive mound and spilling toward the edges of the table. You come closer and look down at one of the slides. Two eyes gaze back at you. From each and every slide, the same eyes gaze back at you. The eyes of Gutete Emerita.

This striking installation is by the Chilean conceptual artist Alfredo Jaar and was acquired last year by the Museum of Fine Arts, Houston. Jaar was born in Santiago, Chile, in 1956, and studied architecture and film before relocating to New York in the early 1980s. His work always deals with political and social issues (to the extent that there’s a distinction), implicitly critiquing the status quo – to put it far too simply. He downplays it, but one can’t help but believe that the 1973 coup led by General Augusto Pinochet (aided and abetted by the CIA) against the democratically elected Socialist government of Salvador Allende has had something to do with the focus of his practice.

The Eyes of Gutete Emerita (1996) is part of his Rwanda Project, a series of performances, actions, and installations conducted between 1994 and 2000 to raise awareness of that terrible season of genocide. Other works in the project include a mail art piece in which Jaar sent postcards to friends around the world, informing them, one at a time, that certain Rwandan acquaintances of his were still alive, a riff on similar conceptual pieces by On Kawara and William Pope L., and an action in which people were handed a “gift” of an empty red box that could be refolded to form a donation box for Doctors Without Borders, raising $300,000 for that organization. 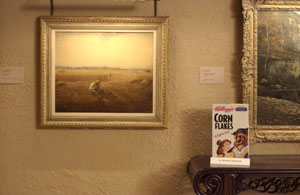 As these brief descriptions suggests, Jaar’s work depends on others for completion; his art is more communal than most conceptual art. Here, there’s just a pile of 100,000 slides, mounded over a structure that displaces an amount of space equivalent to an additional 900,000 slides. Given the text that greeted us, we might think, in a vaguely abstract way, that this aggregation of slides resembles a burial mound. But that implication only comes home to us when this pair of eyes bears witness for the one million of her countrymen and women who lost their lives to the terrible blood lust born of decades of discrimination rooted in colonial misrule. Before we approach the table, Gutete Emerita doesn’t exist for us. Even Jaar’s straightforward, almost didactic text can’t conjure her out of language. Nor can that text, despite its matter-of-fact directness, make us comprehend the enormity of what those eyes saw, convey to us the enormity of people dying – being slaughtered – at a rate of 50,000 per week, more than 7000 per day. Language is too abstract; numbers, especially large numbers, are too abstract. We need to be confronted with something the mind can grasp through the eye, that must be processed more directly than through the filter of the brain.

The problem for politically engaged art, aside from the specific demands it makes of us, is that, by its very nature, it’s ephemeral – ripped from today’s headlines, and forgotten just as rapidly. Too topical, and, all too soon, you need footnotes (already the case with historical and mythological themes in art, not to mention allegorical painting). For politically engaged art to continue to resonate – as works like Goya’s The Executions of the Third of May, 1808 and the Disasters of War, or Picasso’s Guernica, or even Dali’s Soft Construction with Boiled Beans (Premonition of Civil War), do – it must connect with something more universally human than the local and immediate incident or situation that it is responding to. The Eyes of Gutete Emerita not only memorializes the Rwandan tragedy, but also connects to the victims of a long, depressing chain of genocide and political murder: Bosnia and Kosovo, the Argentine and Chilean desaparecidos, the Soviet Gulag, the Holocaust, Armenia, and the genocide-by-colonialism in the Congo, South Africa, and here in the Americas. Gutete’s eyes bears witness for them all.

Adjacent to Eyes, at the end of a short corridor, is Epilogue (1998), another work from the Rwanda Project. A projector lights the wall but there is no image, just a blank white field. Be patient, and eventually a woman begins to emerge from the light. She never totally comes into focus, but remains ethereal, ghostly. She stares at you, somewhat expectantly it seems, yet with quiet dignity. She is 88-year-old Caritas Namazuru, who had to walk 306 kilometers (about 190 miles) from her home to the (relative) safety of a refugee camp. Her stoic gaze suggests that this is not new, that she has seen this before, though perhaps not this badly. Then she fades away again. But, if you wait, she’ll return. Like a bad memory, or a nightmare 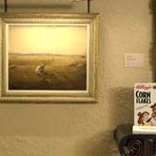