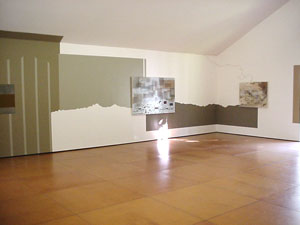 Large fields of tan, taupe, blue and gray paint cover the walls and march around the room in a seemingly random procession, disrupted by doors, windows, their own interactions, and a fine series of paintings.

About halfway along the east wall, the fields of color give way to a cartographic line, a border which delineates the brown “full” space below from the white “empty” space above. The line then meanders on upward toward the ceiling, disrupting the delineation and forming a border in emptiness. On the opposite wall, patches of brown are surrounded by deep steel blue. Elsewhere, the planes are punctuated by vertical bands of essentially the same color, but a bit darker. And — oh — I almost forgot the paintings — eleven of them, to be exact, of varying dimensions, hung against this busy backdrop and adding their own discrete visual dislocations to the general eye-popping hubbub.

For the imagery in her paintings, Wilder has been drawn of late to news photographs of natural disasters. This exhibition was inspired in part by a Laguna Beach wildfire which occurred about a decade ago and which destroyed a number of homes. Wilder is intrigued by the clinical and dispassionate nature of news photos, their “Just the facts, ma’am” deadpan gaze on devastating events. Her interest isn’t representation — the photos do that — but, rather, to reinvest these images with emotion, to try to convey a sense of the profound upheaval that such disasters cause for those affected by them. Toward this end, Wilder has borrowed the language of Romanticism, consciously evoking painters like Caspar David Friedrich and J.M.W. Turner (for this series, one could say that the presiding spirit is that of Turner’s images of the burning of the English Parliament).

But don’t expect to find pastiche. The central tension in Wilder’s work is that between representation and abstraction, with abstraction just about always getting the edge in that tug-of-war. In addition, her use of acrylic further distances her paintings from the masters. The thin washes of her skies aren’t as luminous as Turner’s; and the thick, impasto brushstrokes of her foregrounds are more Van Gogh than Friedrich. 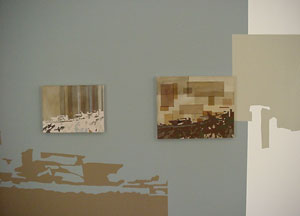 Everything about Laguna speaks to disruption and agitation. Look closely at some of these canvases and you’ll find networks of squiggly graphite lines, again suggesting cartographic borders, running under thin washes of paint that pointedly ignore them. The first painting to greet you, Lagoon, is such a painting; but its midriff is obscured by a broad dark brick band of such thickly applied acrylic that it’s almost sculptural. In Laguna 1, the sky breaks up into vertical bands of the separate color values that comprise it, while, in its companion, Laguna 2, those values become an array of rectangles that seem to recede and advance. The emotion of Romantic painting, the mixture of fascination and fear aroused by the enormity of natural forces that defines the sublime, meets the imposed order of the Modernist grid.

But ultimately that imposed order must give way to the (apparent) chaos of the cosmos. Wilder’s background installation for her fragmented depictions of catastrophe constitutes a kind of parallel universe, like those posited by string theory. It’s a universe of borders that don’t delineate, of ghostly doubles, of forms and anti-forms — a universe that confounds our attempts to settle on certainty, to find a still point of reference from which we can make some sense of the whole. All we can do is move around the room, make our way through the world, and look out at the universe, appreciating, often without comprehension, the awful beauty of it all. 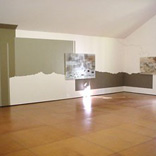