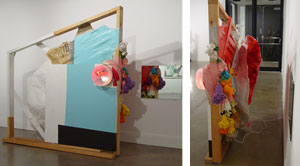 Some people have called Jessica Stockholder’s small-scale assemblages and room-size installations exuberant; I tend to think of this kind of work as messy and a little too junky for my taste. At first encounter, I was less than enchanted. Perhaps the amount of much less successful installation I’ve seen — much of which has probably been influenced by Stockholder — made it easy for me to find her work initially problematic. She is one of those artists, however, whose work gets better for me the more I hear and read about it. Her engagement with painting and the formal rigor of her compositions make Stockholder unique among artists working with similar materials in installation and sculpture. Stockholder’s impact on art and its history warrants two concurrent exhibitions in Houston this month — a survey of studio works at University of Houston’s Blaffer Gallery and an installation at Rice University Art Gallery — and I’ve come to realize it might not be too much of a good thing. 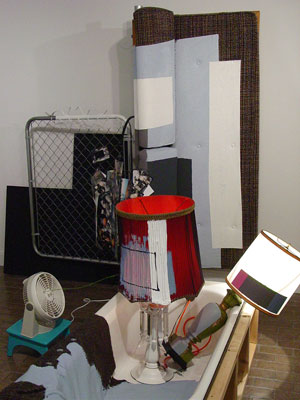 Stockholder uses the studio as a place to work out ideas later incorporated into her environmental installations. The assemblages she produces in this relatively private space are scaled for intimate viewing within small galleries. At least in this respect, the installation of Stockholder’s studio works at Blaffer is successful. Many might get swallowed up in a space with more generous proportions, but at the Blaffer they work.

Kissing the Wall, organized in cooperation with the Weatherspoon Art Museum at the University of North Carolina at Greensboro, surveys Stockholder’s studio work from 1988 to 2003. The exhibition features assemblages, monoprints, and collages. Stockholder creates her assemblages with everyday, throwaway materials that are wrapped, painted, plastered and glued together. She uses everything from building construction supplies like plywood and sheetrock to junkyard/dumpster finds such as car doors and old furniture, to cheap plastic containers from stores like Target and WalMart, to, quite literally, the kitchen sink. Stockholder combines these materials with more traditional media for art making, including papier-mâché and generous amounts of paint. Consequently, her sculptures maintain a strong connection with painting, though this correspondence is clear not just in terms of media, but also through her work’s pronounced spatial relationship with the white walls of the gallery. Stockholder draws on the assemblage and installation traditions made prominent by artists like Robert Rauschenberg and Allan Kaprow, and also looks to Jackson Pollock and other Abstract Expressionist painters as a point of reference. This resonance with the history of American post-war art reflects what art historian Miwon Kwon has described as “Stockholder’s ambitious and sustained exploration of the convergence of collage, abstraction, and the readymade — the three key artistic innovations of the twentieth century.”[1] A tall order, and whether Stockholder actually fills it is another matter altogether.

The most successful of Stockholder’s assemblages strike the viewer as a carefully composed whole, with individual elements identifying themselves through prolonged inspection. For example, a work from 2000 includes two lamps, a bathtub, fan, fish tank, and a gate (few of Stockholder’s assemblages have a title). These objects are painted at various points with rectangular fields of color. Beside the gate, a large upholstered rectangle — also painted, in part, blue, white, grey and black — leans up against the wall. At first, this object does not appear to be what it is in actuality, a couch standing on its side. Looking at this piece, walking around the sides of the tub and peering at its contents, considering the photographs hanging off to one side, the mind oscillates between recognizing the familiar things that make up the piece and seeing the work as a whole. Stockholder does not alter the objects she uses materially, nor make them into something else by taking them apart and then reassembling them; but transforms them through the creation of unexpected relationships between discrete objects in her compositions. The couch is still a couch, but it’s also something else. 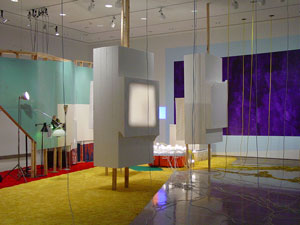 Other works use a canvas-like frame more explicitly as a support. A piece from 1990 features a rough wooden construction placed close to the wall. A flat painted surface only fills the lower right corner of the frame, and even here a light fixture with two differently colored bulbs — white and red — interrupts the white, blue, and black fields of color in this “painting”. At the right side yarn flowers creep into view, with a mass of undyed yarn moving across the top of the light fixture. The work stands about a foot off the wall, making it impossible for the viewer to circumvent the piece, and heightening the tension between the wall and the sculpture that characterizes many of Stockholder’s assemblages. Of course this is exactly the spot that I’d like to wedge myself into — the place where the yarn flowers creep towards a bowl-shaped papier-mâché painted red, with some white peeking through the loose brush strokes. Stockholder affixed a mirror to the wall, slightly to the right of the frame, which affords a view of this garden space. The relationship between the two-dimensional mirror on the wall and the three-dimensional frame on the floor, both of which present an image or picture, complicates the viewer’s expectations of work hung or placed in a traditional gallery.

Stockholder’s assemblages are often viewed as tangible links to her temporary installations, which are destroyed at the end of their exhibition. They are also mobile and saleable, two factors that make them a practical part of Stockholder’s practice. Barry Schwabsky has called the assemblages “essays,” a word that describes them so well it’s worth repeating here.[2] Kissing the Wall offers viewers a survey of these formal essays that illuminates Stockholder’s working process and, for this viewer, more clearly articulates her work’s strong relationship with the gallery space as its site of display than her site-specific installation. However, precisely because Stockholder’s work relies heavily on the gallery as a pristine white cube, the Blaffer’s oddly shaped rooms around its stairwell seem more pronounced, and more of a problem, in this exhibition. Furthermore, the lighting for this show seemed to dull the bright colors Stockholder uses in her assemblages, an effect that really hit home as I flipped through photos in the exhibition catalog. 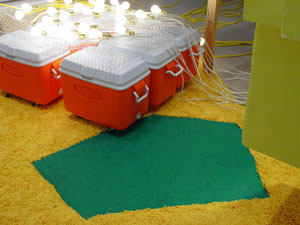 The strongest feature of Stockholder’s work across media is her use of color. In her assemblages, color is sometimes applied, or else simply part of a ready-made object. Color doesn’t function so much as a unifying element as it is a material presence. This strategy carries over into Sam Ran Over Sand/Sand Ran Over Sam, Stockholder’s installation at Rice Art Gallery, where particular elements echo each other through their form and color, revealing the careful composition of what may at first appear to be radically disparate elements.

Sam Ran over Sand or Sand Ran Over Sam begins just outside the building’s entrance with a red-flowering bush in a big blue and white ceramic pot. Stockholder redecorated the Rice Gallery foyer as well with bold red and yellow shag carpet. The eye follows this shock of red and yellow across the floor and up to a glass wall, where a large orange rectangle applied to the glass partially obscures the view inside the gallery. In order to see the installation, the viewer must follow the carpet through the gallery doors and into the space, which has been divided up more or less into three parts. To the far right, a stage light shines onto three white Styrofoam monoliths supported by two-by-fours that reach from floor to ceiling. Bright yellow extension cords hang down from the ceiling light fixtures, snaking past the Styrofoam and into a pile atop six orange coolers. The glowing lights sit adjacent to a Maytag freezer that sits atop another six coolers, this time white ones that add to the feeling that this freezer might represent some kind of altar to the white cube. Stockholder painted the back wall with rectangular fields of color — pink within purple within blue. A huge piece of waterproof sheetrock extends across the opposite side of the gallery, with a series of objects embedded into it and dripping with red, orange, and blue paint.

Though the title and an accompanying statement by Stockholder suggest a narrative of sorts at work in the installation, I’m not sure if this really played much of a part in my experience of the work. As soon as I started picking out specific elements and adding them up, a story of sorts began to suggest itself — a leather chair, water heater, locker, desk, lamps, bowling ball, typewriter, and weight embedded in the sheetrock began to take on a gender (male) and a place (an office or study), but stopped there. I was more interested in thinking about how all of these objects came together. Stockholder collects some of the items used in her installations upon arrival, but in order to save time she also requests that others be purchased in advance. Chance guided the selection of a group of lamps, all with green bulbs, while curator Kim Davenport and Stockholder made the trip to Home Depot in order to select the perfect freezer.

Studies for the installation hang in a small gallery adjacent to the main space. Stockholder visits the site for an installation in advance, and these drawings not only map a transition from two to three dimensions, but also a series of choices that guided this installation. Though most art exhibitions do not incorporate preparatory drawings, I think their inclusion at Rice further highlights the careful preparation that goes into Stockholder’s work.

The theatrical quality of Sam Ran Over Sand/Sand Ran Over Sam stands in stark contrast with Stockholder’s small-scale assemblages, and the stage element, really a more public mode of viewing, corresponds with Stockholder’s more public mode of working, with a group of assistants, at Rice Gallery. Stockholder describes her installation as an event that unfolds slowly throughout the duration of the exhibit, making the audience’s participation in the work by physically entering the space a key element. Being inside this environment makes it tempting to imagine the objects assembled here as stage props: what’s inside that freezer, anyway? But unlike some forms of installation, this isn’t that kind of interactive art. You can look, but don’t touch. And after all, touching Stockholder’s readymade objects necessarily reactivates them as useful parts of everyday reality, shattering the suspension of disbelief that makes them credible as art. To borrow a term from theater, we would thereby ‘break the proscenium,’ lifting the theater’s (or in this case, the gallery’s) magic spell, which allows us to believe in the actors on stage (or the artist’s composition and its components) as the parts they play, and not to confuse them with their true identities as regular people (or mundane, throwaway trash). It is easy for Stockholder’s work to slide dangerously close to the mess and junk I began this review with, and it is the artist’s larger project that saves Sam Ran Over Sand/Sand Ran Over Sam from just such a fate. Still, this installation will be destroyed like the others — in the end, it’s all headed for the dump anyway. 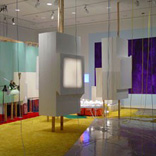