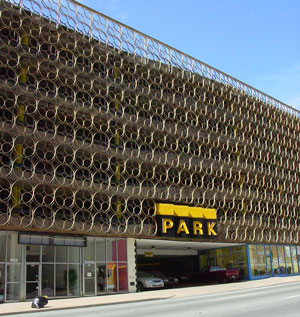 Plush's new digs (the storefront with the pink wall inside)

While not the most outstanding example of architecture, there is a certain type of synergy around the location. On the ground floor, there is an assortment of businesses behind the plate glass: a barbershop next door, a dry cleaner on the other side, and a non-descript office; then there is the gallery with the escutcheon that says Plush at 1927 Commerce.

Pepe Mar’s rhinestone-encrusted tiger laconically sits on a faux fur rug in front of the storefront’s plate glass window. The unruly collage in Mar’s work looks deceptively like the result of a simple procedure, but is actually the outcome of a fairly complicated process. Mar’s sculptures work because they are not just a random juxtaposition of materials but a carefully constructed whole.

Less impressive, but highly attractive, are Michael Wynne’s Larry Hogan #1-3 paintings. These pink tumbling dice on a chaotic rough canvas background would fit above any couch. Their even-toned background automatically limits the depth of field; and this flatness makes them decorative objects that push the envelope while erasing the cliché just enough to make one sarcastic remark in approbation.

The space’s potentially problematic black and white checkerboard floor has been dealt with skillfully, with a medium whitewashing that pulls it back enough not to interfere with the work on view. That said, when entering the middle area one’s eye is immediately drawn to Val Curry’s pink uncircumcised penis castings (regardless of the floor). Curry’s penises-on-wheels are deemed portable humorous sculptures. The humor is evident in all things at Plush, and while juvenile, these are well-made objects that are small enough to be quite desirable.

Garrett’s curatorial touch is what makes Plush work in showcasing unconventional work in a contemporary way. Seeing those little penises on the floor immediately makes the viewer turn away, only to be confronted with a life-sized Jesus crucified in pieces of brown felt. This clash of elements is exactly what Garrett-as-curator excels at: the crucifixion’s materials are so soft and inviting, they invite the viewer to go up and cuddle with them. The sculpture would make an excellent addition to the collection of somebody who has just received a settlement from a big class action lawsuit against the universal church. This kind of resistance would be sacrilegious if not for the passion of the belief system to which it refers. 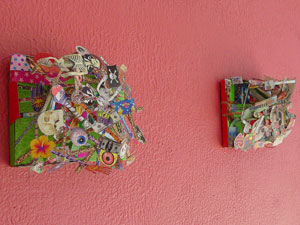 The Philadelphia artist Jim Houser’s iconic group of paintings shine with the language that makes the conceptual art world go round. Houser has incorporated his ties to the skateboarder world in small paintings and wall paintings that intertwine a group of playful objects scattered around the installation. Various kinds of bracketing are used to pull the separate spaces together, and once again, wit and humor make the work as playful as a skate punk on mushrooms.

Dallas artist Robert Moore’s paintings on wood use color and light to create a moody environment shot through with angst and happiness. These abstract paintings are so carefully designed to look off kilter that they seduce the viewer into craving ownership of one of them.

A group of Houston artists are included in the show, and each of them is using various techniques to express their delinquency. First off, Teresa O’Connor is not a boy, but she is in this exhibition anyway. It just goes to show that when you’re breaking rules you might as well start with the ones the curator has imposed on himself. O’Connor’s sculptures and installations are layered with personal mythology pertaining to the western landscape. The work stands out as clearly accessible and goes well beyond being just good.

Robert Pruitt, another Houstonian, exhibits a gold plated plastic Uzi curled up on a piece of velvet fabric. The piece references the golden circles of the building facade and at the same time sniggers at the gun fetishist/drug dealer ethos that makes Dallas such a fun place to live and work. Pruitt uses glamour as its own reward to entice the viewer to want more out of this, but is unable to fully deliver on this feeling. 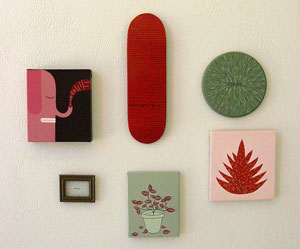 A grouping of Jim Houser paintings

Jason Villegas, the last of the Houstonians, makes sculptures of t-shirts and shoes out of cardboard. Villegas is following a huge trend in contemporary art of trying to make everyday objects even more mundane than they already are. This strenuous over-reaching style once again uses humor to present the idea that being philosophical could be dangerous. Villegas’ sculptures are something to watch grow in the future.

Finally, Mr. Garrett curates himself into his own show. Normally this would seem like vanity, but those who know Randall personally realize the objective choices he is able to make even pertaining to the inclusion of his work in the show. Garrett can objectively look at himself and truly make the decision to include an artist whose work fits in with and is of the same high quality as the rest of the artists. “Going to Chicago and being in the Stray Show this year has really changed things for Plush,” Garrett tells me. Plush now has the attention of collectors in other national cities as well as some attention from European cities. Now that the move from the former location on Akard Street is complete, Garrett has scheduled some interesting shows this year, so everybody keep your eye on Plush.

Images courtesy the artists and Plush.

Mark Babcock is an artist and writer in Dallas. 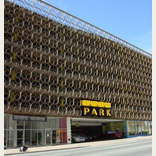