Scottish artist Fraser Stables and independent curator Gavin Morrison have an ambitious agenda with their recently-organized Atopia Projects to reconsider (and, perhaps, nibble away at the underpinnings of) the systems of cultural production we all know and love. For Inset, their sixth project to date, the curators commissioned works from six artists or artist groups that respond to existing institutional, social and cultural frameworks and structures. Inset runs at the University of Houston Blaffer Gallery from January 17 to March 14, 2004. Chicago-based artist Deborah Stratman is one of the artists included in the show.

Atopia Projects: Your practice employs diverse approaches. How would you summarize your interests?

Deborah Stratman: More and more, I would like for my non-film work to engage the public in accidental ways. Or rather, I would like people to come upon the work accidentally, instead of seeking it out. And I am very interested in the ongoing exchange that happens thereafter. I am really enjoying making work that is activated, and in many cases directed, by the public who encounters it.

Presumably with your site-based works the audience is largely a non-art audience. What are the ways in which you have observed and/or documented responses to your work?

The ways responses have been varied. Often I’ve received letters from people who found the work via the booklets that were associated with them and tracked me down. In the case of PARK (a fake parking attendant booth that migrated between different sites in Chicago over an eight month period), I would often just drive or bike past the booth at its many locations to watch how it was being used. At one time, it was in a private lot where there were a number of tow warning signs. The authority of the hut seemed to trump the signage though, because on a few separate occasions, I saw people tentatively driving around the lot and deciding to park. Then they would approach the booth and look inside, thinking it might be a self-pay situation. All they would find was the booklet dispenser marked ‘TAKE ONE,’ and that just confused them more. They never chose to move their cars though. There was another location where some valet parkers started using it. And a third where a crafty guy was pretending like he worked there and taking people’s money. My favorite story of the booth’s authority was that at one point it was tagged, and less than a week later it was painted back to white by the city’s Graffiti Blasters (basically they drive around and paint over graffiti on public buildings and structures).

Could you talk about you more recent site installation Power/Exchange?

Power/Exchange is an exploration of power and telecommunications transmission corridors, culminating in a freely dispensed booklet and a visitor-operated radio transceiving tower in Wendover, Utah. The tower is a 55’ high steel structure physically resembling an early RKO-style tower. It receives 10 specific bands (including Local Police, Burger king Drive Thru Window, Local Casinos, etc) that comment upon regional culture, accessible through a user-operated notched dial in the self-contained OPERATIONS KIOSK, which stands adjacent to the tower. 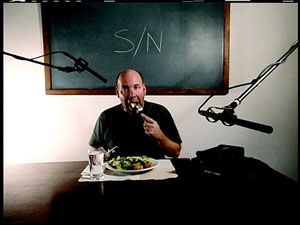 The tower is designed to transmit signals onto Citizen’s Band. As CB is a two-way system, visitors can communicate with other CB users by speaking into a microphone embedded into the kiosk while pressing the TRANSMIT button. In addition, every time a user turns on the kiosk POWER, a pre-recorded loop is broadcast on to low wattage FM. The loop functions as a PSA, relaying the following information: “Frequency allocation is a federal construct. Corporate conglomeration of media leads to a conglomeration of ideas. Advocate for a diversification of voices. Low power to the people. Transmit. Receive. Listen. Reply. People’s Radio Wendover. Free airwave access.”

With much of my recent work, I’ve been interested in revealing the ways corporate space polices us. Both physical spaces of our work environment, and virtual spaces of radio, internet and television. I’m particularly interested in the places where corporate entities merge with those under local, state and federal jurisdiction, as it is these government entities that adjudicate where the ‘public,’ as in ‘public space,’ supposedly resides.

In Power/Exchange you placed the public as simultaneous observers and participants in systems of information distribution and reception that they might not normally monitor. In your more recent work FEAR you initiated a different sort of inquiry, which invited responses to the relationship between safety and fear.

With FEAR, I distributed printed cards in 30 public phone booths around Chicago. The cards had a toll free number printed on one side and the message “The more you desire safety, the more there is to fear. Call now,” printed on the other. When a person called the number, they heard the following message: “At the tone, please describe what you are most afraid of. If you need time to think about what you are most afraid of, hang up, think about it and call back.”

I recently had some of the FEAR responses played on a Chicago radio program, and a person who was listening told me in surprise and disbelief “these are real people!” Which is funny, because who’s not a real person? But I think it was their surprise at hearing working class people and black people and office workers and gangbangers and Mexican immigrants and polish housewives. Not just gallery visitors being arch about what they’re afraid of.

Could you describe the Evacuation Routes project that you are planning for the Blaffer Gallery in Houston?

The Evacuation Routes project, like FEAR, is an invitation. Something as simple as an opportunity to give your opinion can be an empowering experience. I really admire the work of people like Anna Callahan and Harrell Fletcher, and groups like CLUI, N55 and Temporary Services for the generosity of their work. I think the act of participation begets pride and self-respect. It’s good to ask others what they think. We have a lot to teach one another.

The project will initially operate via classified ads placed in some local Houston papers. They read, more or less, as follows:
SEEKING EVACUATION ROUTES
Please submit route suggestions for hurricane or hazmat disasters to: Evacuation Route Project, PMB #179, 1302 Waugh Dr, Houston, TX 77019-4944. All route suggestions MUST include a drawn map. Personalized, alternative and/or non-governmental routes preferred. No monetary compensation, but your submission may be included in a publication.

I plan to compile the responses, select 12 and publish a calendar using these 12 maps. The calendar will also include monthly, thematic paragraphs describing local disaster scenarios that may require evacuation. Some of these will be hazardous material disasters relating to regionally specific industry and some will be natural disasters. On the back of the calendar there will be a detachable strip that can be cut out and hung on a doorknob, which reads: “EVACUATED.”

At Blaffer Gallery all of the submitted responses will be on view as line drawings on the wall, and as intact original submissions in a binder. I intend to travel and document the 12 selected evacuation routes, a process that hopefully will inform the design of my own Situationistic evacuation route. I am hoping that by considering my surroundings in terms of a military scheme, or a means of escape, the end result will be engaging, not because of its paranoiac appeal, but because it provides a way of rethinking the built landscape.

Are there any particular reasons why you’re making Evacuation Routes in Houston? Is it a response to that city?

Houston is situated along the Gulf, which is a largely petrochemical landscape. It is also geographically subject to hurricanes. The local environment is saturated with a peculiar mix of potential disaster. I am interested by the ways people factor these threats into their everyday lives, and by how disaster potential may alter patterns of movement. In particular, I am interested in the way mass movement of humanity during a disaster is planned for and organized on federal, state, local and individual levels. And I hope to learn if there is any more sanity or humanity to routes devised on an individual level as opposed to a governmental one.

In certain site works (such as FEAR and Evacuation Routes) you invite the public to respond, but you don’t necessarily inform them of the purpose or use of their response. What are your thoughts on how your surveys are phrased, and their lack of contextualizing information?

Maybe these projects are less “collaboration” than works in which the collective process is made manifest. I’m not entirely sure how I feel about the fact that the pieces don’t always inform participants about the purpose or use of their responses. I want for people to question the nature of things. My favorite response from the FEAR piece was a woman who replied “You. Because I don’t know what this all is about or who you are.” The less you tell someone, the more curious they are. On a certain level, I am more interested in getting people curious about the same issues I am curious about, and provoking them to investigate something further on their town terms, than in what the final physical/aural/visual manifestation of a piece may be. This may ultimately be a selfish desire, since I’m basically asking for their responses as a means to personal understanding.

I am intrigued by the disquieting edge of your work and what it may imply about an individual need/desire for security. All of the site works that we have discussed tap into surveillance or cultural/individual fears. Could you comment on these issues? 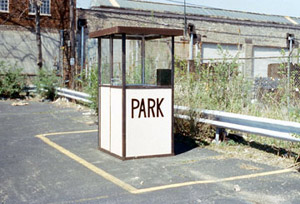 As our society drafts an increasingly reactionary policy based on fear, I think it becomes more important to question what that fear is. To really look it in the face and ask not only what we are afraid of but why. As a media maker, I have even more of a responsibility to question the role media plays in stoking our fears.

We are at a point in our hysteria for security, that the only place we should assume we are not being watched is in our own homes. And even there… if we use telephones or the internet as windows out to the world, they are also windows in to our private lives. I’m also curious about how much this frenzy for surveillance has to do with the sexualized power of voyeurism and the exhibitionist titillation of being watched.

No matter what our fear, it is only powerful because of its potential. Fears are things that might happen. It’s an ecology based on what ifs. Of threat. And it is impossible to reign in on a mass level because there is no government or corporate entity that will ever be able to suppress the infinitely vast volume of potential catastrophes and disasters we can imagine. I think fear can only be overcome on a personal level.

This text is one component of a ‘dispersed publication’ accompanying the exhibition Inset, organized by Atopia Projects for the Blaffer Gallery, the Art Museum of the University of Houston (January 17th-March 14th 2004). An index listing the locations of other exhibition-related texts may be found at www.atopiaprojects.org.

PARK (2000-2001) was realized in conjunction with Temporary Services and was funded in part by the GUNK Foundation.

Power/Exchange (2003) was realized in conjunction with the Center For Land Use Interpretation (CLUI) and was funded in part by the LEF Foundation and the Guggenheim Foudation. 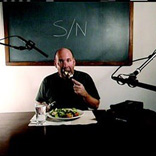