Julie Bozzi’s paintings at the Modern Art Museum of Fort Worth feature the quirky humor and fascination for the banal found in, oh, just about every other picture that comes down the pike these days.

But there’s more to them than currency.

Bozzi’s contemporary attitude and awareness as communicated in her work are offset by such old-fashioned qualities as gentility, formality and patience. As such, her landscapes combine the uncorked whimsy of Robyn O”Neil‘s scenic drawings and the laconic wit of Ed Ruscha‘s urban typological photographs with the slow, quiet complexity of a 17th-century scene by Goffredo Wals.

Bozzi works out of doors, generally setting up at sites not far from her own home, and thus in locales that any number of people drive past daily. She paints directly from 21st-century nature in all its compromised glory, composing small horizontal images — few exceed 4-by-10 inches — that are replete with rich, abstract detail. Each tiny brushstroke contributes to the overall representation, is part of the intricate layering, but counts independently, charged with the energy of color and gesture.

The process takes time, with the artist visiting her site day after day, refining her sense of what she sees, carefully considering what she records. Working as she does, Bozzi builds time into her work in ways that are evident to the eye — in ways that give the gift of slow looking to eyes weary of other forms of glib visual experience. Viewing one of Bozzi’s images becomes a wonderful indulgence in the luxury of time, even if reading glasses are required in order to savor the depth of hue and texture she achieves.

The Modern’s presentation of Julie Bozzi: Landscapes 1975-2003 marks the artist’s second solo museum exhibition. Curated by Andrea Karnes, it features 46 images, arranged in one big, airy room, and serves as an unintended counterpoint to the Modern’s exhibition of about as many — but very large — paintings by Joan Mitchell, which also are based on landscape. Most of Bozzi’s pictures take the form of the horizontal strips noted above, their format echoing the sprawl of suburbia. But about 10 focus on details of such sites, on individual piles of dirt or tortuously pruned shrubs.

Bozzi’s first museum show was American Food, which debuted at the Museum of Contemporary Art, San Diego in 1992 and also was exhibited at the Fort Worth Modern. It was devoted to a study of American popular food, presented in the form of painted images and of tiny scale models and preserved specimens of cereal, Chinese take-out food and diner fare, among other things people eat.

American Food tenuously tied Bozzi’s practice to categories of Dutch still life, but it more closely related to postmodern list-making, to pop art and to the enthusiastic organizing that a visit to the office supply inspires. It was fun, it had a pleasantly pseudo-taxonomic air about it — and it said more about the artist’s obsessions than it did a broader order of aesthetic experience. While this new show also is quite personal and is linked to American Food, it has much more depth — not only in terms of its historical and aesthetic references but, as suggested above, in its intense generosity: It gives viewers much more than we are habituated to expect from contemporary art. At the same time, it sets Bozzi in a class apart as a contemporary artist.

In her work, Bozzi addresses landscape as she would any other overlooked element of everyday life. She lavishes attention on it, not because it’s special but because it’s so ordinary. As such, her pictures resist inclusion in the genre of contemporary landscape, which includes works by April Gornik, Neil Welliver, Sylvia Mangold and other artists for whom landscape has become a central motif, an opportunity to paint. If Bozzi considers a context for her work, it probably would be among the various artists who have established landscape’s historical place in Western culture.

In part, the success of her enterprise comes from this simultaneous denial and embrace of the genre, from her awareness of so many of its manifestations — from early Corot to Cole to Ryder — and the ways in which she mingles them with the commodity ethos of pop art and minimalism. Another factor is devotion to observation somewhere between that of a 19th-century amateur naturalist and a 21st-century connoisseur of all that’s of the moment — again, the tension between slow looking and reflexive recognition.

As it stands, Bozzi’s likeliest contemporary link would be Vija Celmins. But if Celmins” imagery at all reflects human imposition on the rest of nature, it’s because she copies her paintings and drawings from photographs — previously selected images that have been fixed in time and space. The differences between Celmins” practice and Bozzi’s can’t be understated. Bozzi chooses a subject that is animated and changing moment to moment. The extent to which Bozzi’s pictures compress time into a timeless moment separates her not only from Celmins, but from most artists currently working from photographs or with photographic imagery. Even her most photographic image — a strip of sand and surf along the Gulf of Mexico — reveals itself as richly, densely built up of paint.

The two earliest works on view were made in 1975, while Bozzi was studying at the Skowhegan School of Painting and Sculpture, between undergraduate and graduate stints at UC-Davis. The views in the Skowhegan paintings are remarkably lush, and one even features a diagonal road leading into the illusory distance. The sense is that, at Skowhegan, Bozzi was working in an environment offering no end of pleasing vignettes, ready made.

Upon returning to Davis, Bozzi began painting flat, frontal images that relate not only to pop and minimalism but to her immediate surroundings, as well — a flat-land farming community if ever there was one. Under expansive skies and adjacent to seemingly endless fields of crops, Bozzi began isolating strips of these unremarkable panoramas, almost as if she were reporting upon the results of agricultural research and development.

When she traveled to Texas and found similar views, Bozzi’s work made the transition without skipping a beat: The differences between Immature Tomato Fields with Mt. Diablo, Davis, California (1977) and Texas (1978) are negligible. In both, the shoulder of the road prominently occupies the foreground, fields of crops create a middle ground and distant mountains are rendered insignificant through their diminution of scale and their atmospheric blurring into washed-out skies. Her paintings from Southern California are similarly tedious (and engaging) samplings of barrier walls and freeway plantings.

Yet each picture contains clues to the shifts in locale and, for those of us who live in Fort Worth, Bozzi’s Periphery of Botanic Garden (from Remote Parking Lot) (2001) announces the city every bit as clearly as one of the more clichéd images associated with Cowtown.

Bozzi’s aversion to overt drama is commensurate to her fondness for the pedestrian. Not only does she make a virtue of looking at the overlooked — it’s effectively her raison d”etre — but she eschews the kind of incident that becomes too easy an excuse for an image to be made and viewed. Bozzi considers herself an explorer who finds things of interest that others have ignored. At the same time, it seems, she urges us to discover that worth for ourselves.

Images courtesy the artist and the Modern Art Museum of Fort Worth.

Janet Tyson is an artist and writer living in Fort Worth. 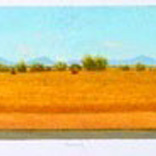