David Fulton has made his peace with beauty. 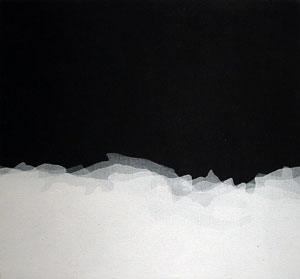 For some time, this rigorous Houston conceptualist regarded beauty with a certain amount of suspicion, even though, frequently enough, his own constructions have been guilty of it. The reasons for his antipathy have never been entirely clear, but they probably lie in the conceptualist concern that the work not be seen as merely (to borrow from Duchamp) “retinal” – that is to say, once the eye has been satisfied, the mind must be as well, if not with beauty, then with some other kind of narrative. Beauty can seduce one into thinking there’s more substance than there might, in fact, be. For the conceptual artist, beauty can get in the way. It can become an end in itself.

But in his current exhibition at New Gallery, as well as in his last show there two years ago, Fulton has found a way to enlist beauty in the articulation of his artistic interests. His principal concerns are the indeterminacy of knowledge and the entropy inherent in closed systems. Maps, the two-dimensional abstractions of three-dimensional (and, arguably, four-dimensional) reality, as well as photographs, those keepers of memory, are just two of the systems that Fulton has interrogated over the years, drawing attention to the ephemeral nature of what they attempt to fix in stasis. The work and thought of Robert Smithson has been an important influence for Fulton (risking understatement). Equally important, though, is the time he has spent camping and hiking in the West, particularly the Four Corners area, over the last several years. 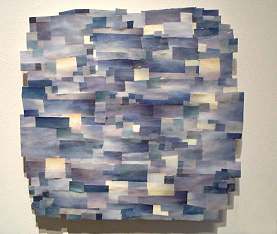 The show is divided into four bodies of work: Skies, Boundaries, Shore, and Strata. With a single exception, all the pieces in the Skies series are described on the checklist as photo collages; the exception, Sky Map (2002), a grouping of twelve, is made of soap bars embedded in wax. Another hallmark of Fulton’s work is the use of humble materials; here, the multi-colored soap bars, rescued about two-thirds of the way through their life cycle, float at various depths in the wax, rendering some more ghostly than others. Seen as maps of the sky, they suggest clouds caught in a Western sunset. Beside them, some of the photo collages form simple bands of color stacked vertically; these collages are covered by a translucent scrim, masking the intensity of the colors. The final work in this series is Sky Column (2003), wax-covered squares of skies mounted on PVC pipe and rising to a height of about seven or eight feet.

Boundaries and Shore are both painting series that make up about half the show. Boundaries comes in two varieties: color, and black and white. The color series suggest a landscape against a uniform ground, though the image painted across the middle of the canvas refuses to coalesce into anything so determined. The acrylic is thinly applied; colors show through the colors over them, and the landscape (horizon line, really) floats against a ground so indeterminate as to be beside the point. The black and white Boundaries paintings are even more ephemeral, suggesting mists on a lake or looking down on clouds at 30,000 feet. The first layers of white acrylic are filmy, revealing the black ground through them; upper layers gain in density until the last, foremost layer is richly opaque, emphasizing the impression of depth.

The figures in these paintings (the “landscape,” the “mist”) are constructed of the delineations of borders from maps — states’ borders, nations’ borders, continents’ borders — all overlaid. They may mix lines defining geopolitical abstractions with the (relative) concreteness of continental outlines, and Fulton traces the borders freehand, to further offer chance an opportunity to play a role in the resultant image. The Shores series employs the same methodology, but here the figures taken from maps are the meanderings of rivers, overlaid in a dense network. These are also rendered in black and white acrylic, with two of the three paintings, Shores 1 and Shores 2 (both 2003) further obscured with a thin white wash overall.

The Strata series, five in all, are made of cement poured into plastic molds that then become frames for the pieces. These wall sculptures would seem to have an antecedent in Smithson’s pour pieces, like Asphalt Rundown in Rome in 1969 or Concrete Pour in Chicago the same year. Here, to a certain extent, chance controls the final appearance of the work, and small imperfections in the surface of the cement evoke the irregularity of the ancient processes alluded to by the series’ title. Wax is introduced in two of them, bringing a reminder of the liquid origins of rock strata, while in Strata, Small 1 (2003), a recessed lower pour makes relief and shadow compositional elements. 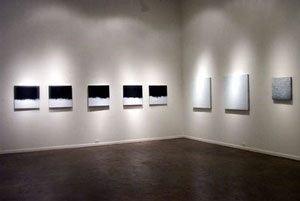 Another aspect of Fulton’s project is art historical reference, and some of the works in this show may look familiar. The color Boundaries paintings echo some of Cezanne’s Mont Sainte-Victoire paintings, especially the last series of 1902-1906. And the Skies photo collages with the vertically oriented bands of color recall mature Rothko (even Sky Map, the wax-embedded soap piece, brings to mind that artist’s Multiforms, in which he first experimented with floating bands of color). But referencing Rothko with bands of color taken from photographs of the sky is one thing; that would seem an attempt to make his tragic, transcendent assertion literal. Rothko made his existential assertion in the shadow of Auschwitz and Hiroshima; but Fulton, following his zenji Smithson, takes a longer view: set against geologic time, human assertions of any kind are absurd. It has been pointed out that if the age of the Earth is translated to the terms of a calendar year, modern humankind doesn’t make an appearance until a minute or two before midnight on December 31st. That’s hardly enough time to be proclaiming eternal verities. And there’s a beauty in that. 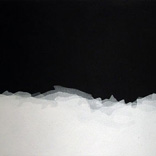