by Christopher French May 2, 2003
FacebookTwitterEmail

James Rosenquist, as portrayed in the retrospective exhibited jointly at the Menil Collection and the Museum of Fine Arts, Houston, is a remarkably uneven artist. 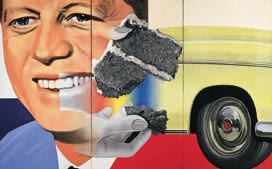 I mean that as a complement, both to Rosenquist’s restless, prolific creativity, and to the picture of it that Walter Hopps and Sarah Bancroft have crafted. Beginning with his transition from billboard painter to Pop artist, Rosenquist has always manipulated signs in search of symbolism. But he has also yearned to exploit the hybrid, assemblage structure that Robert Rauschenberg and Jasper Johns so ably mined. This contradiction — between the pure painting that is his forte, and the painting/sculptural hybrids that are his ambition — creates a positive tension that makes this show much more animated than your usual retrospective.

Hopps and Bancroft could have chosen to streamline and edit Rosenquist, in much the same way the Museum of Modern Art largely edited out certain aspects of Gerhard Richter’s production to make its recent retrospective of his art more appealing, if less different. To their credit, the Rosenquist curators encourage a warts-and-all portrait of an artist’s determination to coalesce a series of disparate parts into a unified, dynamic whole. And just as important, they foreground the artist’s rarely seen preparatory collages, emphasizing the hand-to-eye coordination that is the true north of Rosenquist’s aesthetic.

The Menil, with its more intimately scaled galleries, is the place to start. Picture- as opposed to mural-sized, these works chart a quick progression from sketchy, tonal abstractions to the great run of paintings Rosenquist produced in 1960s. People like to tag Rosenquist as a Surrealist, but these pictures reveal him, in advance of the personal computer, as the original PhotoShop aesthetician. As the collages make clear, magazines were the primary source of Rosenquist’s imagery, and following the progression from studies to finished paintings, you realize that what he was after was a view of the images as they piled up in his mind as he flipped magazine pages. Calling this Surreal is like calling cacophony noisy. And Rosenquist’s early paintings are mercifully free of the opining Freudian theatrics or political dogma that so date classic Surrealism.

I Love Your With My Ford or The Light That Won”t Fail I (both 1961); Waves or Vestigial Appendage (both 1962); Early in the Morning or Broome Street Trucks After Herman Melville (both 1963); Lanai or Two 1959 People (both 1964). Take any of these and you could chart an entire career — David Salle did, and look where it got him. Freely, open-endedly associative, Rosenquist, like Walt Whitman a hundred years before him, used his art to compellingly evoke the highs (JFK, car culture, sports) and lows (Canned spaghetti, racial segregation, rampant consumerism) of his time. His art is also insistently handmade, to the surprise of people who, having seen these paintings in reproduction only, assume that Rosenquist relied heavily on mechanical techniques like airbrush or silkscreen.

But the Rosenquist of this show is an itchy fellow who, for all his garrulous affability, strains to expand the boundaries of painting. He looked enviably at Rauschenberg’s combine approach and said to himself, "I can do that." And so he tinkered, adding objects (Blue Spark, 1962), incorporating neon (Reification, 1961), and composing paintings with moving components (Car Touch, 1964). Every once in a while he pitches a success using these techniques, but more often, as in the ambitious but awkwardly realized Conveyor Belt (1964), the result is a compromise — a painting hung at an awkward height to accommodate the things stuck on it. And Rosenquist, like Rauschenberg, resisted sotto voce. The carefully composed quietude of Above the Square (1964) stands out as a plainsong melody amid the image arpeggios cascading across so many of the 1960s canvases. 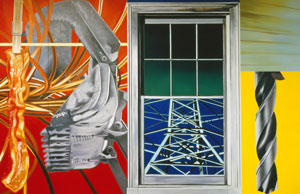 The irony of a great pure painter wanting to be something else is palpable at the Menil, and especially poignant when you look at the spontaneous progression, from charcoal sketch to painted gesture, and from painted gesture to finished painting, that makes a work like Cage (1964) live and breathe. Perhaps at the advent of Post-Modernism it was no longer enough to paint with Manet-like facility. Rosenquist’s pointed experimentation certainly suggests this to be the case. Perhaps he feared being labeled "just a painter," but if this was the case, then why did he not mechanize and roboticize his procedures, à la Warhol? He couldn’t because he loved the brush too much, the paintings declare. At this point, he was like a fly in honey, writhing his way to greatness with F-111 (1964-65, 10 x 86 feet). Unfortunately, this room-filling painted installation did not make the trip to Houston, and so the exclamation point is missing from the Menil’s otherwise impeccably selected installation.

F-111 precipitated a shift in scale that dominates the MFAH portion of the show. Assemblage declines, replaced by ever-bigger image sequences that are no longer equivalent, but increasingly fetishized or distorted. Ultra Tech (1980), which introduces the second installment, is quintessentially Rosenquist, but also a bit much, as if the artist had recruited one too many actors in his search for the perfect image hybrid. F-111 is also, after Guernica, perhaps the greatest protest painting of the 20th century. Politics and socioeconomic themes rise to the surface in the MFAH paintings, just as they rose to the surface of Rosenquist’s personal activities (he was arrested in a 1972 anti-war protest in Washington, DC). He also found himself getting into hot water as he turned to public commissions to find permanent homes for his mural-sized canvases. Rosenquist painted Star Thief (1980, and not included in the exhibition; its surrogate is the more intimately scaled Leakey Ride for Dr. Leakey) as a commission for Florida’s Dade County International Airport. He described this work as "a parking lot for space junk," but it became infamous as an early entry in the culture wars when former astronaut Frank Borman stridently charged that he had never seen anything like this aloft in his space travels. 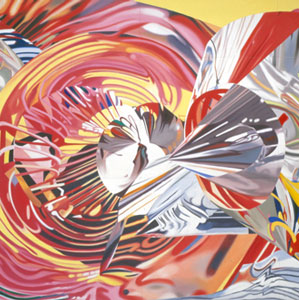 Borman’s agitations helped persuade Dade County to reject Star Thief (Cologne’s Ludwig Museum now owns it), but Rosenquist retained his interest in space. Some of the best and largest paintings, from Time Dust-Black Hole (1992) to The Stowaway Peers Out at the Speed of Light (2000), splice or sequence interstellar and planetary imagery. Other works, like House of Fire (1981) and the Swimmer in the Econo-mist series (1997-98) structure pictorial critiques of commercialism. The best of these possess a charged symmetry that powerfully agitates and animates Rosenquist’s iconography. More often though, his extremely long, horizontal formats take Jackson Pollock’s interest in the peripheral field to its logical conclusion. Nearly filmic in their storyboard-like processions, they encourage a time-based, footspeed-paced reading that suggests the languid transitions of Japanese scroll paintings.

There are also, amid the crowded register of Rosenquist experiments, some notable failures. The head-on topicality of the elegiac series The Serenade for the Doll After Claude Debussy (1992-1993) and a 1996 anti-gun series is a Warhol-derived cul-de-sac from which Rosenquist quickly exits. More annoying are the "crosshatched paintings," which intersplice slivers of two strikingly different but poetically related sets of images (e.g., women and flowers) in a slice-and-dice approach that reminds me of a fusion of a boxing match and the Vegamatic commercials that once populated late-night local television. The attraction of the technique is obvious, but it doesn’t grow, only replicates, illustrating Diderot’s critique of painters who practiced what he termed the "flicker effect."

Three enormous (17 by 46 feet) murals fill the MFAH’s Mies van der Rohe-designed Cullinan Hall. These paintings (and the more intimately scaled paintings at McClain Gallery) show the artist back on his game, abstracting what appear to be the reflections of anamorphic mirrors into vibrantly colored fictions of the universe as seen at the speed of light. In Rosenquist the MFAH has finally found an artist capable of dealing with the problematic proportions of this cavernous space, and his eye-popping finale provides a sense of completion to the many twists and turns of this incisive retrospective.

James Rosenquist: A Retrospective was organized by Walter Hopps and Sarah Bancroft for the Solomon R. Guggenheim Museum, New York. It remains on view at in Houston through August 17 before traveling to the Guggenheim in October.

All images appear courtesy the artist, The Menil Collection and Museum of Fine Arts, Houston. 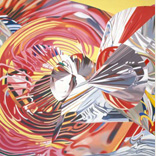