Nothing to Eat But Food

The title of Paul Kittelson’s The Next Supper is revealing. 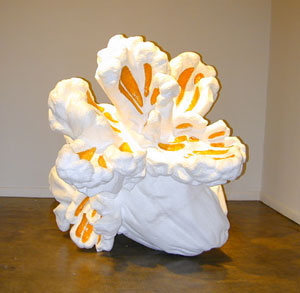 Not quite funny, not quite mystical, it’s hard to place this slight revision of one of western art’s top-ten most popular titles. As whimsy, it would fit well in a shortlist of potential names for a garage band: John Cougar Concentration Camp, JFKFC, The Next Supper. It’s an apt name for a band that needs a name that’s good enough – something to paint on the bass drum; something that’s just barely a joke. As spirituality, The Next Supper would be at home on the marquee of a church, or the top of a pastor’s steno pad. A topic in need of a sermon — the name might be just enough of a twist to keep things novel for the Sunday regulars who come again and again for the same thing: the Good Word.

Like the garage band that just wants to play music and like the pastor who has to tell the same story every Sunday, Kittelson delivers the object of his obsession with a shaggy sense of humor and a professionally tempered spirituality. The subject is after all supper, and he’s approached it with the even-tempered attitude that the genteel word calls for. He’s filled Barbara Davis Gallery with sixteen riffs on the theme of food: sculptures of varying sizes and materials that despite their diverse forms share a sense of earnestness. 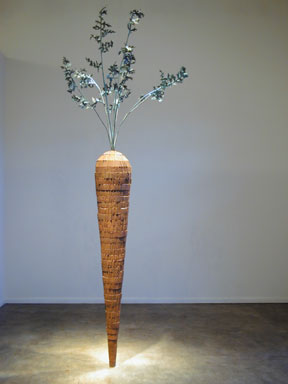 The subject of every work in the show is either a piece of food or a utensil for food’s preparation or consumption. But consumption, in Kittelson’s case, does not equate with consumerism. Unlike Warhol’s cans of soup or Oldenburg’s giant junk food, Kittelson’s food doesn’t belong primarily to the world of pop commodities. A glass of milk, a piece of toast, a carrot, some potatoes — his food is the food of the Children’s Television Workshop; as basic as the letter “K” and the number 4. And perhaps it’s wise to keep things this way. With a pared down dietary lexicon, the work avoids the obnoxious associations that many other items in the supermarket would bring. A pint of Ben & Jerry‘s? A can of Slim Fast? From the vegetable aisle to the butcher’s counter, food is fraught with political, ethical and personal concerns that would contribute little to what seem to be Kittelson’s primarily formal interests.

And yet, the most interesting piece in the show is Big Bang, a four-foot tall popcorn kernel formed from Styrofoam and colored with acrylics. Big Bang strikes you most immediately as a so-bad-it’s-good pun on pop art, something that should have been (and possibly was) made already, a long time ago — but who cares? Like its subject, it’s immediately desirable and not particularly good for you. It’s nothing, it’s filler and it’s great. The foam Big Bang is probably Kittelson’s most rewarding play with his materials as they relate to the subject they depict, and it marks some of the most entertaining fruit of his obsession. The process of carving an accurate depiction of something as insignificant as a kernel of popcorn suggests the potential for a Tom Friedman-type monomania that’s absent in the rest of the show. Maybe “monomania” and “food” are too easily associated, but Kittelson’s pop dalliance stands out. 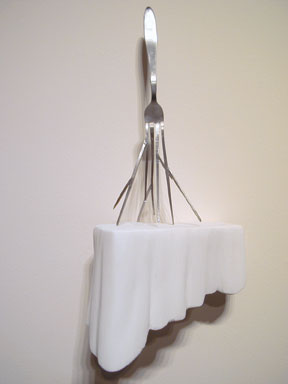 Eclipsing Big Bang in size, but with a decidedly more illustrative bent are the large-scale Carrot which greets visitors as they enter and Toast in the gallery’s main room. With their massive size and metal construction, the pieces seem destined for outdoor installation and are better suited for public spaces than the constraints of the gallery. Although they dwarf the smaller sculptures in the show, it seems that the power of Toast and Carrot lie in their monumental tribute to the less considered members of the food pyramid. But, like other monuments to the forgotten, they exist to be chanced upon and don’t necessarily provide for the more open reading of the smaller and less durable Conversations: a padded bench (or pew?) with a large cushion for a sitter and a smaller cushion for a pile of potatoes. With an implied use somewhere between the office and the parish and an unclear function (potato-peeling for executives? potato-peeling as prayer?) Conversations puts Kittelson’s food in a new context and encourages us by extension to consider his other basic foods in similar half-familiar narratives. 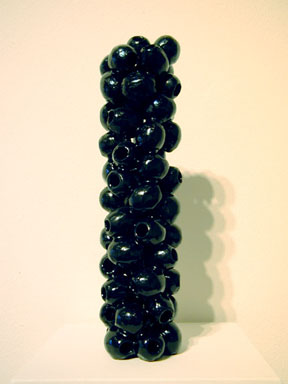 Elsewhere, Kittelson’s attempts to familiarize his narratives while avoiding pop gives the show a Garrison Keillor nostalgia that occasionally edges too close to poetic. Offerings — a pew structure topped with hand-made Styrofoam cups in the place of votive candles is uncomfortably literal. Kittelson’s Comforter, a hanging bedspread made of stitched Saltines doesn’t escape the limits of the sewn-kitchen-products genre and has all of the empty domestic care of similar pieces that are constructed from teabags every year in every art school in America.

As a material exploration, Comforter is part of a process that Kittelson finds more success with in the small piece Black Holes – a jar of pitted black olives, without the jar. Cast in polyester resin, Black Holes, like the better work in the show, seems to come from his persistence with his subject matter and the inspired moments that come from it. On the same small shelf, for example, sits Milky Way, a glass-sized Sculpey work made of small balls of plastic clay assembled into what looks like the result of sticking a straw into a glass of milk and blowing, hard. The small piece captures a number of Kittelson’s key concerns: It depicts a elemental food product consumed by kids and treated in a childlike way. The material relates to both the food depicted and the context of the food depicted (white Sculpey is both milky and childlike). And yet, in the end the piece is more than a receptacle for nostalgia. While containing the nostalgic read, the object stands on its own as a gloppy, primordial, abstract form — and it’s all the more surprising for it. Surprising for the viewer. Surprising for the imagined kid blowing into the implied straw. And, presumably, surprising for the artist. With his patient dedication to his theme, you imagine that like the garage band and the pastor, it’s these small transcendences he lives for. 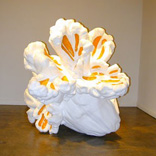