The entire eighteenth floor of the Holiday Inn Select at Highway 59 and Kirby was the mise-en-scene for The Million Dollar Hotel, a one-night extravaganza of art, booze, and theatrics that was the best high school party you never had — right down to being busted by the cops (okay, a friendly security guard) at the end. 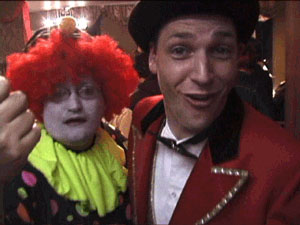 The no-holds-barred pageant featuring the work of twenty artists was organized by local impresario Paul Horn, who also hatched last spring’s funky Friendly Mart, a night of kitsch-saturated art nestled and sold alongside beef jerky, flavored condoms, and cheese nips on convenience store shelves. Presiding over the pandemonium bare-chested and with a rapper’s calculated, swaggering excess, Horn explained that he planned The Million Dollar Hotel because he had “always wanted to go to an over the top, Van Halen, New York show in Houston.” 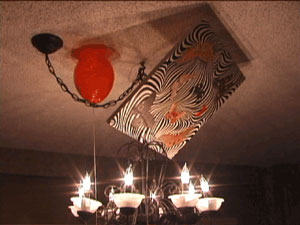 Bill Davenport had the good sense to hang his piece above the chandelier, and out of harm's way (though the balloon is making a good effort)

In the height of the evening, with the low-ceilinged, claustrophobic hotel corridors crammed with merrymakers, the party coursed with the debauched, lunatic energy of a hurricane party. Local guilds of Santas, clowns, and strippers were well represented, as well as a number of free-roaming performance artists, creating an almost hallucinatory, phantasmagoric social tableau. The endless parade of attention-getters muscling through the crowd reached an unfortunate low with “Mr. Brown from Out of Town,” rumored to be a disguised Nestor Topchy. Mr. Brown’s antic of smearing the hands of unwitting partygoers with a chocolaty material (that all too closely resembled the fake poop in his breast pocket) realized something of the event’s potential for juvenile boorishness. In the midst of this clownery and the profusion of actual clowns, even the lengthy chorus of farts and yeehaws in The Art Guys” screwball sound installation beckoned as a positively sane and serene reprieve.

Some of the more intriguing pieces were those that commented on the hotel environment. In the room curated by San Antonio artist Chuck Ramirez, it appeared that Ethel Shipton had teleported her geometric vinyl bedspread straight out of the Jetsons, and it in turn transported the entire space into a new dimension. Justin Kidd”s subtle placement next to a bathroom sink of a crashed model car encased in a transparent, soap-sized block of plastic was a wry, winsome response to his recent near-death experience of being broadsided by a drunk driver this past New Year’s Eve. Mark Flood‘s lace painting almost seemed as though it was a piece of the ordinary hotel decor. Though exquisitely textured, the painting’s teal and sea foam colors and the seashell motif of the lace pointed towards familiar motifs in the dull business of hotel interior design. 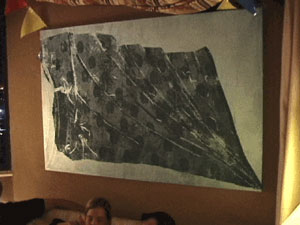 One disappointing upshot of the party’s high jinks was their ability to smother the potential for a meaningful experience of most of the art on view. In the midst of much bacchanalian lounging on hotel beds, the spinning of multiple DJs, and a variety of unpredictable performance pieces, it was easy to feel nothing less than quaint and dweebish while trying to get a closer look at the work on display. For anyone semi-seriously hoping to get acquainted with new pieces, this feeling of alienation was compounded by the bewildering lack of identifying information for almost all of the work. Horn’s failure to credit the contributors (or ensure that they were aware of their responsibility for taking care of it themselves) was a disservice to the artists and added to the party’s overall feeling of fraternity-style clubbiness. While the event ostensibly emitted a come-one-come-all vibe, the chaotic placement of unidentified pieces made for a scene distinctly more welcoming to those who were already insiders in the local art world. 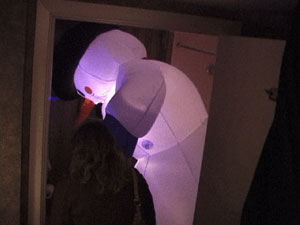 Snowman in the bathroom

The other tremendous drawback of the Animal House atmosphere was the level of risk that the pieces were subject to. Two elegant, almost leggy stainless steel fingers by Sharon Engelstein turned up missing at the end of the night, along with several other works or hotel furnishings reported possibly damaged or lost. The party was broken up prematurely as Horn and art car artist and moonlighting security guard Ernesto Perez announced the apparent theft and politely asked everyone to leave — a dismal conclusion for an event billed as a blowout that would run from 7 until “late.”

The Million Dollar Hotel treated the art as a lavish backdrop of curiosities rather than a hallowed presence to be spoken of in hushed tones, and this after all was not a bad thing. It was refreshing to experience the ordinarily vapid hotel interiors jazzed up into something altogether more randy, bizarre, and thought-provoking, and also to see so many people relaxing and having a good time with and around the art. It has been a difficult year for many of us and Horn is to be commended for aiming to start this one off with a bang. 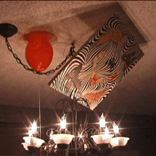