By occupying one main gallery and four quadrant galleries at the Dallas Museum of Art, the Wolfgang Laib exhibition involves a physical journey as much as the spiritual qua intellectual one that Laib’s works strive to instill in their viewers. 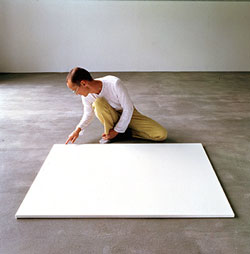 It’s an installation that makes perfect sense, nonetheless. Laib’s pieces — whether they are drawings for larger works or the installations themselves — are extremely aware of space. This owes as much to Laib’s choice of materials — pollen, beeswax, milk, marble, rice and wood — as it does to the nature of his works. Many take on the form of an edifice of some kind, or are inspired by actual architecture, or are even intended to accommodate a person inside. Add the peripheral aspects of some of the materials — the aroma produced by large quantities of beeswax or pollen, for instance — and what results is artwork that is above all environmentally aware.

It’s a quality that accents the visual as well as the curious aspects of Laib’s work. Born in 1950 in Metzingen, Germany, Laib entered the University of Tübingen in 1968 to study medicine, becoming a doctor in 1974. He eschewed practice in favor of art, however, because he reports that the natural sciences were too limiting to achieve his goals. Ever since, he has lived in a village in southern Germany. 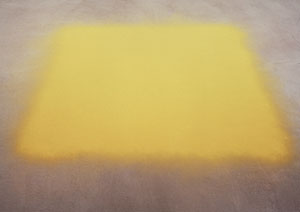 Exactly what Laib is trying to achieve has always been somewhat elusive, but if his interests and works are any indication, it appears to be a way to link the natural world with a metaphysical one. He admits to being inspired by the art and life of southern India, his own interpretations of Western and Eastern philosophies, St. Francis of Assisi, and his disciplined relationship with nature. These ideas manifest themselves in his work in various ways.

The southern Indian influence is perhaps most obvious, if only because Laib’s photographs of temples and cemeteries there accompany many of the works, and provide the visual clues that inform his own vocabulary. Laib uses Muslim tombs as the basis for his “rice houses,” which are either marble or aluminum edifices topped by a slight variation of pitched roofs that are surrounded by a light sprinkle of rice. The visual eloquence of Hindu temples is turned into the wax vessels of You Will Go Somewhere Else. 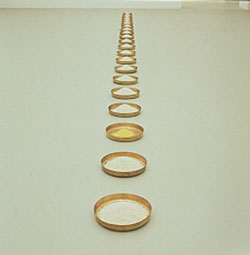 Elsewhere, the Eastern influence is more of an informing subtext. Laib’s Brahmandas is a grouping of eight polished oval stones that uses the egg-shaped symbolism associated with the Lord Brahma of Hindu belief. And for his “milkstones” — floor-mounted, flat slabs of polished white marble with a thin lip at the edges that contains a barely discernible layer of milk — Laib exploits liquid equilibrium to create a visually dramatic piece, one that dares you to detect where the solid ends and the liquid begins. His installation piece The Rice Meals uses a series of brass plates — most containing a small pile of rice, one containing a pile of hazelnut pollen — to produce a work that is simultaneously an example of linear simplicity and offertory reverence.

But there’s also an undertow of fashionable cultural fascination to this work that may simply be a function of popular cultural in the 1990s assimilating quasi-mysticism. Don’t be surprised if your first encounter with Laib’s works makes you think of Wallpaper magazine or the cool, ascetic affluence of a Crate and Barrel flagship store. Marrying the spiritual with material has been an obvious design trend during the late `90s age of ample disposable incomes.

More problematic is a long-standing Occidental trend of bestowing the East with a mystical mien simply for its very exoticness. Famously explicated and branded “Orientalsim” by Edward Saïd, it’s a bias that grants Eastern cultures a certain epistemological, ontological, and metaphysical purity and sacredness because of their other-ness as opposed those belief systems that sprouted in the West. It’s an idea that’s casually apparent in Laib’s art: It consciously affects your posture when looking at them. Laib’s pieces compel you to bow your head as if in prayer, or tilt your head toward the heavens, in order to view them. they’re works that make a devotional or hallowed stance an integral part of the viewing experience.

None of the above is meant to take anything away from the admitted beauty of Laib’s works, however. Most dramatic are the brightly colored rectangles of pollen sifted onto gray floors. These scintillating yellow hues — formed with either dandelion or hazelnut pollen — are so intense they seem otherworldly, though they couldn’t be more organic. Because they’re made of fine powder, the rectangles don’t have sharp edges, and they take on the fuzzy, hazy aspect of a blurred photograph. It’s an effect that only adds to their more-real-than-reality quality. Naturally, whether their luscious beauty is enough to make you forget that they may be the products of a cultural arrogance that’s as old as colonialism is entirely up to you.

Images courtesy the artist and the Dallas Museum of Art. 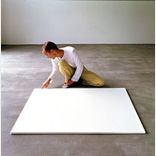