Ironically, I ran into Mark Flood at the SUITS show, like the ghost of Banquo turning up at supper to remind the Art Guys where the body’s buried. In 1991 Flood’s Museum Piece was acquired by the MFAH. 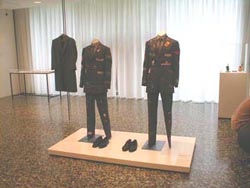 Museum Piece is bitterly ironic; printed squares on a large blank canvas offer to put “YOUR AD HERE- Next exhibition Spring 1990.” The lines are clearly drawn: art vs. commerce. Flood slaps the two rudely together, offering to sell a few square inches of holy ground to the highest bidder. It’s a perfect example of how artists” attitudes towards corporate sponsorship have changed in ten years. 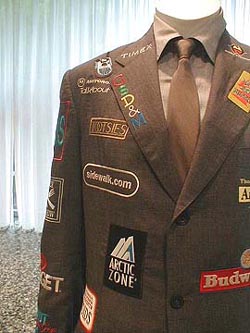 Comfortingly, Flood’s piece has no real ads on it. We all secretly hope that subversions like that will fail; it would be creepy if it worked. That’s why the success of the SUITS project, in the sense that the Art Guys got paid to place corporate logos into the museum’s permanent collection, is chilling. But take heart; nearly all of the suits sponsors are the usual suspects: longtime Texas arts supporters, arts organizations, and a few companies (Altoids, Target, etc.) whose marketing strategy already included arts funding. Wailing Wall, a grid of framed rejection letters shows that the Art Guys were notably unsuccessful in interesting Coke, Pepsi, VISA, Kodak, or Playboy in their project. SUITS: The Clothes make the Man is too risky and small time for the major corporations the Art Guys solicited; they reserve their dollars for mass audience events like the Olympics or a Monet retrospective. 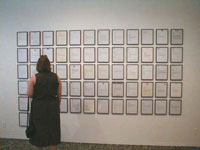 Suits began as a mildly critical jab at the business world. Business Savvy: Suits Concept Drawing from 1997 shows a smiling suited man in a bland office corridor. Logos from dozens of brand name products and companies are collaged onto his suit, making him a walking product, a company man. It’s a familiar anti-establishment stance. The Art Guys would go undercover, transforming themselves into gray receptacles of respectability, and sell out to corporate America for a laugh. As the project gathered speed, the details of selling and showing the suits took more time, money and energy, and the Art Guys’ critical stance was supplanted by a more complex, contradictory focus on celebrity. 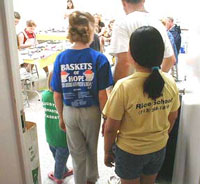 One of the most interesting effects of the SUITS project is the way it points out society’s acceptance and even enthusiasm for corporate branding. On Sunday at the MFAH, there were more corporate logos on the audience than the Art Guys” suits. Ahead of me in the Turrell tunnel, three kids were wearing shirts that said “Rice School,” “Baskets of Hope,” and “Houston Gymnastic Academy.” My own shirt plugged “Monte Carlo,” although I’ve never been there. What is clever about the Art Guys” SUITS project is not that they are walking around wearing logos on their jackets; but that unlike the rest of us, they are getting paid for it.

All images courtesy the artists and the Museum of Fine Arts, Houston. Except the one of Bill in his t-shirt. 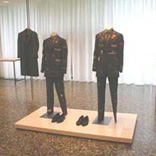