Moody’s glass-walled back room is perfect for Hilary Harnischfeger’s kooky, glitter-laden installation, Ni Chomei. Named after a street in Japan where she lived as a child, the show mixes the decorative preciousness of a Japanese lacquer box or folding screen with the tacky glam of a Barbie palace. 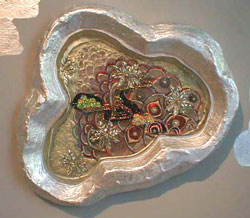 Harnischfeger’s imagery draws on Japanese and Chinese landscape elements: stylized trees, mountains and cascades serve as convenient props for art which is more concerned with decoration than representation. She retains a light touch; by choosing silver rather than gold, transparent overlays rather than encrusted opaque surfaces, Harnischfeger avoids the heavy pomposity of European rococo in favor of a floating, scintillating transparency akin to Art Nouveau or Gustav Klimt. 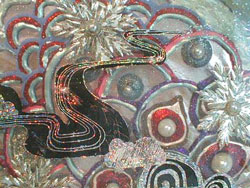 Harnischfeger’s works balance campy glitz and toylike fun. Intricate but not fussy, the pieces play sublime aspirations against playfully low-tech manufacture. Irregular slabs of cast resin are clogged with a conglomeration of sequins, glitter, iridescent paint, fabric, and faux pearls in a sort of super-decoupage. Occasionally her casual craft falters; the bulky, silver-leafed basins and frames that overwhelm several of her tableaus are too smooth to be faux rock formations, too cruddy to be sublime silver bubbles.Slide, the most elaborate piece in the show, zigzags down one of the gallery walls, suggesting a winding river or series of waterfalls. Its length and thinness encourage a sequential reading, like a scroll painting of a water journey. Along the way, Harnischfeger improvises little incidents like a twist of current, a frothy pool, or a bankside tree, saving the most thoughtful juxtapositions for eye-level, where minute examination of the complex surface is easiest.

Overall, the show is crowded and uneven. The unframed cast resin reliefs like Slide, Cascade, Target, and Montezuma are the strongest. The shimmery, resin-impreganted fabric trees of Sai Kee look promising, but combine awkwardly with the glitter-brick road they stand behind. Likewise, the resin splashes of Waterfall have little to do with the central standing form of trailing bricks. Panda, the lone freestanding floor lump, hints at a direction that the show could have gone, but didn’t. The two large-scale wall installations fight one another, and both seem out of step with Waterfall, a simpler, more materials-oriented floor piece that lies between them. The silver-leaf clouds that paper the walls and windows struggle to bring the many disparate pieces in the show together, but are not quite enough. 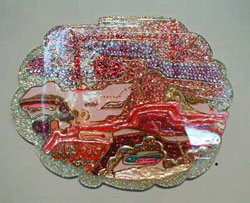 Harnischfeger’s Ni Chomei takes advantage of the outrageous assortment of cheap, glitzy supplies available in craft and hobby stores, using them with a touching determination to compile some transcendent value from itty bitty pieces of junk, strenuously striving to enforce the little-girl optimism of someone making paper flowers or stringing love beads in a tacky plastic world.

All images courtesy the artist and Moody Gallery. 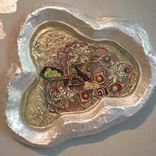