Ask a random sample of Americans what theme best expresses life at the dawn of this 21st century, and chances are they’ll respond with some pre-packaged cliché — the age of the Internet, the triumph of democracy, et cetera — the likes of which the popular press and politicians dispense like free coffee at an AA meeting. 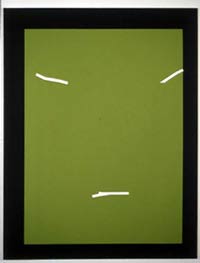 Thing is, both net surfing and voting are only symptoms of an all-encompassing idea, which better describes what’s going on. In fact, you can probably find it in your children’s rooms, or if you’re childless, more than likely in your own. All you have to do is stand it the doorway and utter the first word that pops into your mind when you take a look around: mess.

While the mess is a beast that natural life aspires to with graceful abandon — thermodynamic entropy, law of the universe — humans intentionally trying to (re)create it is a Sisyphean effort: just as you’re almost there is all comes tumbling down. But the New York-based artists Jeff Elrod and Anthony Goicolea, both currently on view at Angstrom Gallery, make beautiful, intoxicating messes as effortlessly as President George W. Bush makes malapropisms look common. Together, their artwork is a succinct elocution of what it’s like to live in these here times.

At first glance, Elrod’s enterprise is the more perplexing of the two, if only because it’s asking a great deal of you as a viewer. His current process involves creating imagery on a computer — anxiety-ridden codes and text squirming into anxious forms — that he then projects onto large canvases. The image is traced onto the surface with meticulously shaped masking tape and painted over with a solid layer of acrylic paint. Once the tape is removed, what’s left is part-early 20th-century dramatic geometry of Malevich and the industrial bravado of Marinetti wedded to the intimidating size and emotional depth of postwar abstraction. 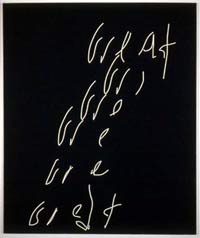 But the green expanses of Tape Deck and Green Slave may seem like inchoate masses that can’t be deciphered if you don’t take a moment to let Elrod’s imagery slip under your skin. Just as the Futurists and Abstract Expressionists were products of their time, Elrod’s vocabulary is the perfect compliment for the digital age. It’s a idea best encountered in Get Off the Internet, a morass of text-based signs and doodles that flirts with, but stops just shy of, making concrete sense. Without the code that makes the Internet meaningful, all we’d see online is a nebulous, constantly moving stream of information that doesn’t mean anything by itself. 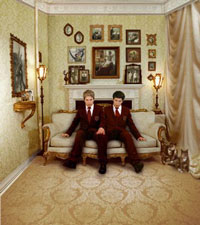 In the black-and-white Swimmer’s Ear, an outdoor deck is littered with multiple images of Goicolea as young boys playing in and with water with a gleeful, mischievous chagrin. That there’s multiple lens flares on this brisk summer day as if there were more than one sun outside hitting the lens only heightens the otherworldly reality that he creates.

More subversive are Feastlings and Fraternal, both of which are set in rooms decorated with affluent accoutrements. The boys in Feastlings act like little hellions, tossing food, spitting water, and passing out in their plates — all the while looking smashing in their pocket-insignia blazers and shorts. The suggested twins in Fraternal leer eerily at the camera in matching dark suits and ties, engulfed in a golden parlor. The lingering implication is that American blue blood’s traditionally endogamous ways breed this sort of improper behavior and creepy offspring, and suggests that marriages made in the penthouses of Park Avenue or during the cocktail parties of Newport aren’t too far removed from the genetic manipulation going on in laboratories.

Taken together, Goicolea and Elrod offer a witty response to living in the mess that is America as it crawls into 2001, and is yet another forward-looking exhibition from one the more consistent galleries in the North Texas area.

All images appear courtesy the artists and gallery.