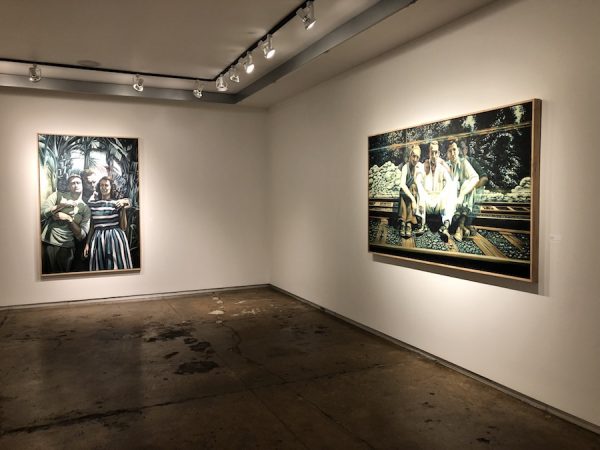 Devon Nowlin’s Familiar Strangers at Artspace111 in Fort Worth is a collection of paintings depicting tense and haunting psychological spaces. The paintings are at the same time familiar and disconcerting, with unnatural colors and unsettling compositions. There are sections of paintings that wobble in double vision, figures fading in and out of scenes, and impossible combinations of each. Her subjects’ facial expressions belie the psychological tension they embody, and demand close scrutiny to make better sense of what you’re seeing. 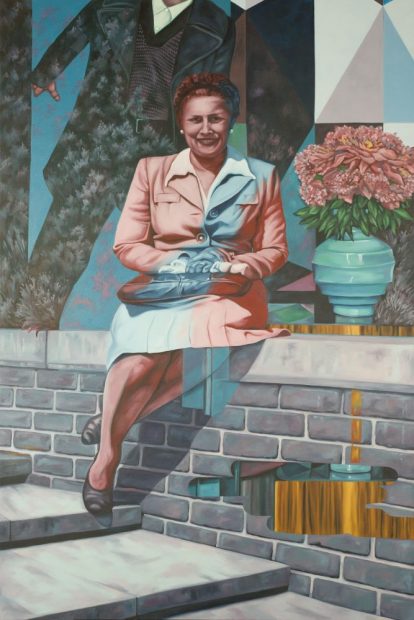 In Omniscient Narrator, a woman in a pleated uniform dress sits almost uncomfortably on a short wall, her hands clutching white gloves, and her legs crossed. Her gaze is firmly forward and a partially silhouetted figure behind her inexplicably shifts from silhouette to full form, crossed between a hedge and a geometric pattern that itself becomes a half-silhouetted backdrop to a turquoise vase. There is yet another change in the image that reflects the vase as either a mirrored image in a pool forming on the wall, or a digitally erased section of wall that suddenly reveals what’s behind it.

This surreal head spin is par for the course in Nowlin’s paintings in this show, which, with the inclusion of three pieces from a decade ago, becomes a survey exhibition of her work. 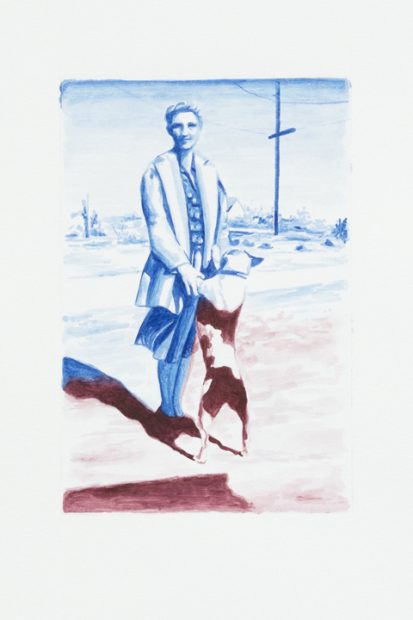 One other immediately apparent thing in Strangers is the limited color pallete that Nowlin employs. Using only a dozen colors, cyan and magenta hues are created and fill paintings like Witnesses and Messengers 11.25.2017, and 07.10. 2017, resembling color shifts in old photographs, transformed into almost muted monochromatic remnants of what they once were as their color dyes begin to fade. In this way, Nowlin’s paintings delve into a parallel narrative, connecting faded images to a dark nostalgia present in her work. 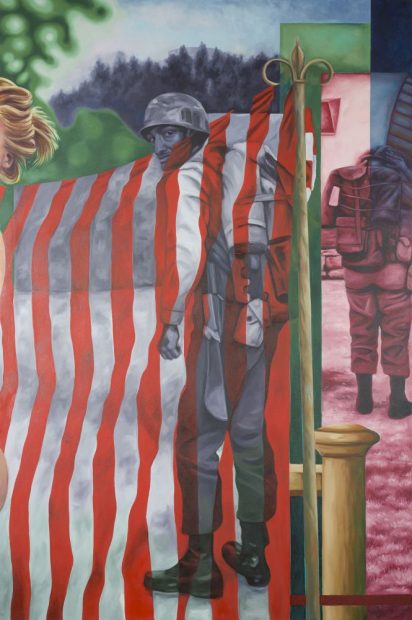 The solemn soldier in Off-guard, 2018 strikes a pose in quarter turn as he faces the viewer. His gaze, suspicious and sallow, seems to suggest a combination of ‘what the fuck did I just get myself into,’ and ‘how are we doing in 2018?’ When nostalgia takes us back to this time period of the 1940s and1950s, it is often seen as the country’s best years. But what this kind of nostalgia forgets actually reinforces the deafness to a period when black people still couldn’t drink from the same water fountains as whites, were still relegated to the [black] of the bus, and after returning home from war, were still considered second-class citizens, if considered citizens at all. Off -guard’s flag-draped, long forgotten soldier is collaged with a blonde figure fading out of the composition into the corner of the canvas. In correspondence and conversations with Nowlin about Strangers, and about this particular juxtaposition, Nowlin responded: “She represents a flippant, ignorant white culture, that is ignorant of its privilege, but even more than privilege, ignorant of the cultural and political hegemony that perpetuates institutionalized racism. Why is it ok for me, this white lady, to make a painting about that? Because I am a part of this world and again, hopefully, have made a mirror [that reflects it].” 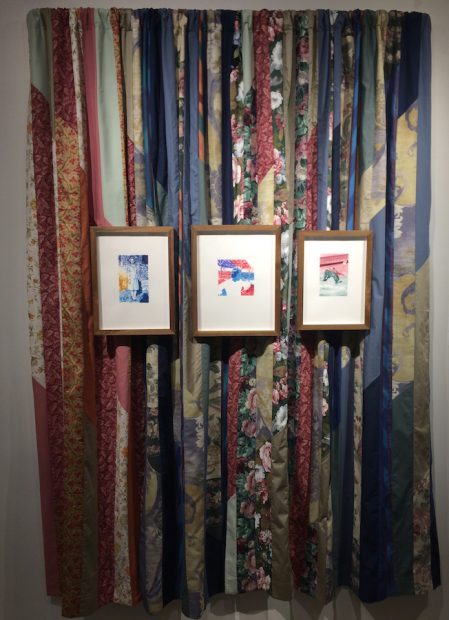 For at least a decade now, Nowlin’s work has scrutinized history through found photographs and composed tableaux that blend the past with the present. Her still life compositions include fabric sculptures and museum trifold flyers, along with photographs and installations that layer and sometimes blur the lines between the fictional and the autobiographical. With Strangers, though, Nowlin returns to a relationship between the photograph and painting. This fascination with found photographs, often connected to memory and a curiosity about untold stories and unfinished lives, again becomes the focus of her work in Strangers. Where Nowlin takes this fascination, however, is beyond a facsimile of a facsimile. Her deft talent for recreating images that are true to form notwithstanding, Nowlin also gives the viewer completely new visual spaces, and connect only insofar as the pictures are a starting point for her paintings. This idea is illustrated convincingly in the way Witnesses and Messengers is installed in the gallery. Three of the 10×13-inch oil on paper paintings are framed in slightly larger walnut frames and hung in front of multi-paneled drapes stitched together to form a single piece. These drapes and other wildly textured fabrics and surfaces reference the domestic and familial, which feature prominently in Nowlin’s earlier Casual Luxury Complex series from 2014. These elements trace the evolution of the Nowlin’s painting style and language back to that period and earlier.

Nowlin’s roots are deeply planted in Fort Worth, and she has a hand in everything from public art installation works, art collectives, and art handling at the Amon Carter Museum of American Art. It’s reasonable to speculate that at any time, her focus could easily or dramatically shift from these haunting and intense visual studies of the world.  And even after receiving multiple honors for her work (Best Exhibition of 2018, and one of the best artists in Fort Worth for the same period, from the Fort Worth Weekly), Nowlin doubles down and stays true to what she does best, which is paint.