It’s a Good Weekend to See Art in Texas 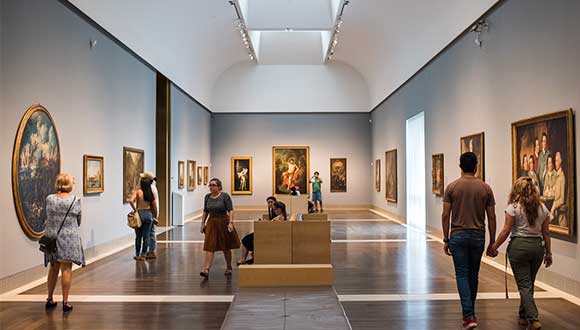 Visitors at the MFAH

It’s getting hotter in Texas, and that used to mean that galleries and museums would ease up on programming, throw up a three-month group exhibition, and wait out the summer months. Nowadays, however, art spaces in all of Texas’ major cities aren’t letting the summers slow them down.

This weekend is a good example. No matter where you are, there’s bound to be something going on nearby. Here are just a few things happening today, May 19th, and tomorrow, May 20th.

If you feel like looking at some old, rare, and collectable books, check out the Houston Book Show today from 10AM-5PM and tomorrow from 11AM-4PM at the Arabia Shrine Center.

If you’d like to learn more about the Contemporary Arts Museum Houston’s exhibition Right Here, Right Now: San Antonio, two of the artists in the show, Ana Fernandez and César Martínez will be at the museum talking about their works from 2-3PM.

Aurora Picture Show is presenting two segments of their Extremely Shorts Film Festival today: at 4PM you can catch the youth program, and at 7:30PM they’ll screen the main program of selected films.

There are too many openings to count happening in Houston today, so just check out our Houston events page. Some highlights include the galleries at 4411 Montrose, the galleries on Colquitt, and McClain Gallery.

Tomorrow, from 12-4PM, the Museum of Fine Arts, Houston will host a community day in celebration of its new Glassell School of Art building.

This is the final weekend for Big Medium’s annual West Austin Studio Tour — you can catch it today and tomorrow from 11-6PM. There are also a number of auxilery events centered around the tour; you can see those on our Austin events page.

If you’re in San Antonio, head over to the opening of Britt Lorraine’s exhibition PANOPTICON at Sala Diaz from 7-11PM. Lorraine will be performing during the opening.

Also opening in Alamo City from 5-9PM is a show of works by Sara Corley Martinez at Mantle Art Space. Martinez’s works “discuss the irregularity and chaos of bodily functions during and after pregnancy.” If you want to hear the artist talk about her work, get there early for the artist talk at 5PM.