by Reyes Ramirez May 5, 2018
FacebookTwitterEmail 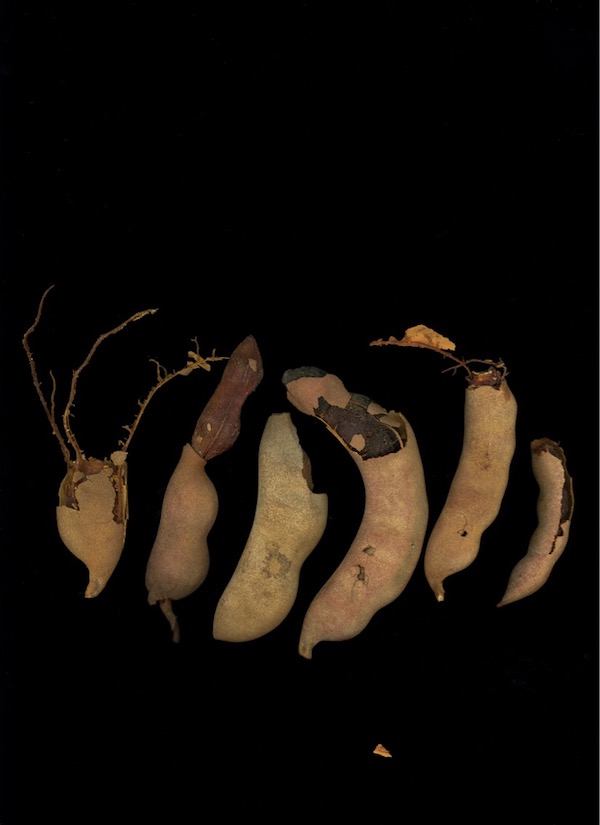 All photographs by Maureen Penders

Ed. note: The following is the first installment of a series titled ‘Notes From Alabama Song.’ Over the course of 2018, Glasstire will run pieces by writers about a new series of shows appearing at the Houston art space Alabama Song. The pieces, companion writings about the shows, are commissioned and edited by Gabriel Martinez, artist and director of Alabama Song.

I’m a result of a diaspora. My father came to America in the ‘80s to escape the Guerra Civil. However, my mother is a Mexican immigrant. The question often comes up: will I ever be Salvadoreño enough? Such is the case with newer generations of Salvadoran Americans, removed from El Salvador but no doubt a product of its history. Salvadoran Americans often don’t see themselves in art institutions in Houston. Thus, can Salvadoreño American artists have an identity? What do you need to be part of a culture? Houston-based artist Maureen Penders prods this question with her photography collection titled Cultura, featured at Alabama Song, which presents photos of objetos unmistakably Salvadoreñx, such as pristine pictures of pupusas, Izote leaves, corn husks, etc. Penders and her photography are goddamn gems and, in many ways, a reckoning. I’m not so sure when I’ll have another opportunity to uplift a Salvadoreña in Houston and her art on this sort of platform.

Photography has historically been a tool of journalism on Salvadoreñxs, neo-conservative voyeurism even, that displays Salvadoreñx pain, suffering and gang culture, emphasizing everything wrong with El Salvador in the media. If you find this assessment unbelievable or ridiculous, the POTUS not only called El Salvador a shithole, but also ended TPS for Salvadoreñx immigrants, putting 200,000 lives in peril. To what end? Not to mention, MS-13 seems to be El Salvador’s greatest export, according to Washington D.C. and American media. All this, even though the United States participated and prolonged the Guerra Civil in El Salvador, directly funding the killing, displacement, and oppression of Salvadoreñx’s. I barely, if at all, saw any major Houston art institution or publication uplift contemporary Central American art to counteract these narratives. But shit, Houston loved when immigrants helped rebuild the city after the hurricane. We boast the fourth largest concentration of Salvadoran-born immigrants and the fifth highest concentration of Latinxs in major American cities. Where are we in your self-portrait, Houston? Penders subverts these images of Salvadoreñxs as only being miserable, but instead as a people of vibrancy, sustenance and leisure. What happens are thoughts and questions and revelations that go beyond the images.

Each photograph and sculpture in Cultura stands alone, but they also work together to create a larger presence. All of the images in this exhibition can be boiled down to: an object set upon a pitch-black surface. So simple, yet so effective. One photo shows five vainas of tamarindo on said black surface. Each seems to be broken or incomplete, strands of the pod’s frame jutting out to hold together what was once there. They resemble veins, capillaries that feed into nothing at all. Each vaina of tamarindo is a broken heart. It’s the details, I tell you. In her exhibition description, Penders makes clear that not all things present in her photos are inherently Salvadoreñx: “[The photos] showcase material culture specific to a Central American identity, yet which appears in many Latin American countries. The Salvadoran identity of the objects becomes apparent only when the subtleties of their articulation are made clearer: the names and uses specific to El Salvador. The objects are linked to their homeland not by their visual appearance but by the language surrounding their usage.” After all, I knew of tamarindos in the Mexican context as agua fresca; tamarindo is consumed in El Caribe and India in other forms. Tamarindo is indigenous to Africa, brought over to the Americas by colonizers. A staple of Latin American cuisine is African. This is not new or rare, no matter how many Latinx’s remain ignorant of this fact. Thus, there’s a presence of pan-Latinidad in this lone image, one that envelops more than one continent. The tamarindo is synecdoche. Each broken heart could be yours, hermanx. 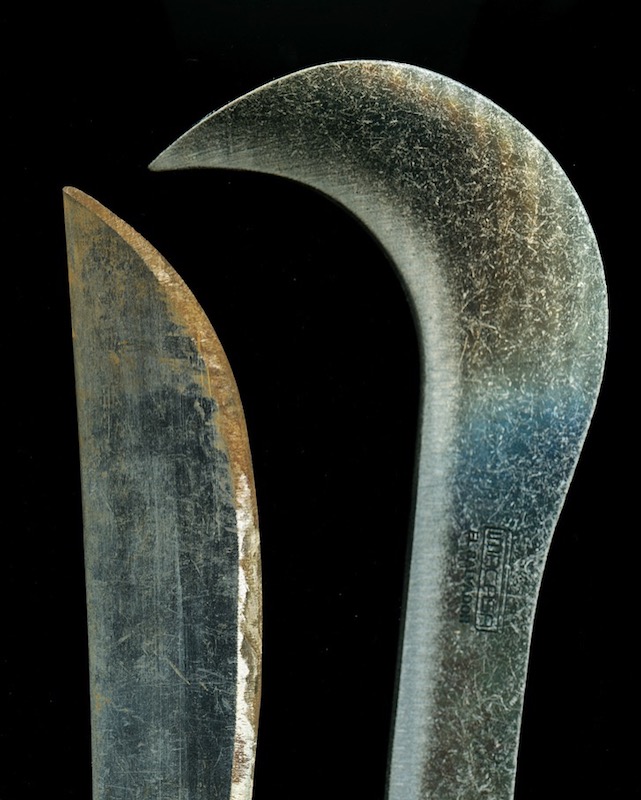 Another photo shows the blades of a machete and a sickle. The machete’s blade seems to fit perfectly into the curve of the sickle, not unlike a lover’s face into neck of the beloved. Can two things perceived as violent be capable of love? The machete bears some brown rust on its blade. Is it useless now? Can we appreciate things that aren’t useful to us anymore? Can ‘useless’ things be beautiful? Is an object’s practicality and fitness for labor a prerequisite for love? If you’re willing to apply this logic to objects, why not people? The sickle boasts scrapes and scratches from wear and tear. The blade’s edge is a lighter silver than the rest as a result of repeated sharpening. The scrapes and scratches appear to float near the blade’s edge, like stars surrounding the luminous line of a galaxy. Again, is this inherently Salvadoreñx? No. Many peoples have different relations to the machete. Ask Dominicanxs and Haitians, Puerto Ricans. But there’s something larger being built here in this exhibition. 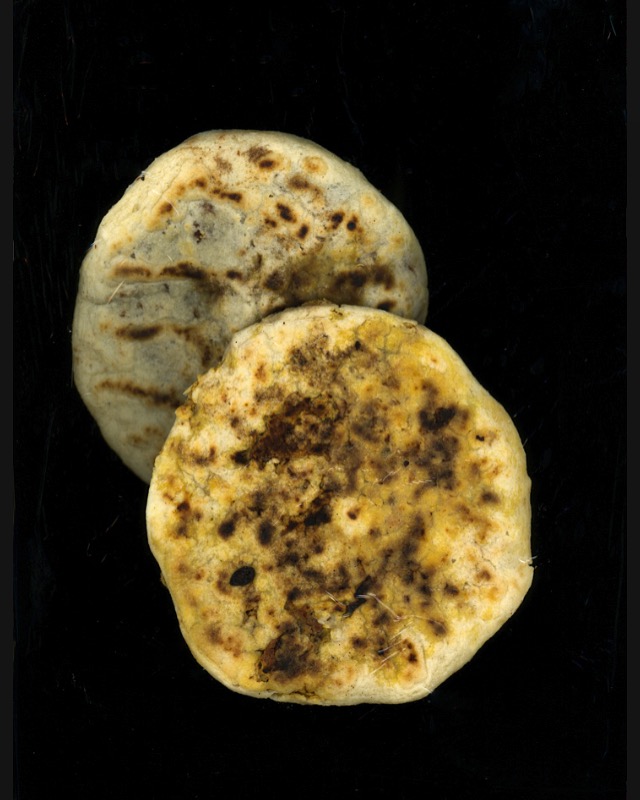 My favorite from this series is a photo of two pupusas, one stacked on top the other; in the exhibition, there is also a sculpture form of the image: a literal pupusa laid atop a pitch-black panel on the floor. Pupusas are perhaps the most famous metonyms of ‘Salvadoraness’, a most delicious invention of the indigenous Pipil; however, Hondureños, amongst others, are also known to enjoy the dish as the Pipil tribes and their influence aren’t solely enclosed to El Salvador, which goes to show how incomplete and uncomprehensive the concept of a nation can be. In the photo, the two pupusas bear black spots from burns. The roundness of the pupusas are oblong and profound, the best example of Penders’ use of the black background to highlight the thing itself. The pupusas appear to be two portraits of alternate earths, the burns: land and the bright dough: sea. They float in space, orbiting each other. The sculpture, though, offers another perspective on the pupusa. It’s simply there on the black, reflective panel on the floor. The panel does not inherently become a plate, yet the pupusa is inherently made for consumption. Not this pupusa. It exists unto itself. Can you enjoy something that you cannot consume? Can something exist without meeting your definitions or preconceived notions of purpose? I love this piece because, for me, it speaks to the wider idea of whether Latinx’s, specifically Salvadoreñxs/Salvadoran Americans in this case, can simply be without fulfilling a defined purpose? You see what happens when you let something be? I know I do. According to America, I am meant to be a conduit of labor and nothing else — not of art or intellectualism. I’m a fucking writer. Nothing I write is for practical purposes, per se. My writing simply is, like me. Like everyone else. This pupusa is me. The pupusa is a round mirror.

Maybe it’s that displacement I feel sometimes that serves as an extension of my parents’ participation in a diaspora, that feeling of wandering and not knowing what surrounds you. I know that I am here. I am now. All of these images are me, yet not. They don’t belong to me, but they do. As I said before, my father is Salvadoran and my mother is Mexican. I was raised by my mother and thus was imbued with Mexican-ness. But I cannot exist without my Salvadoran-ness. The history of El Salvador is a part of me, just as much as Mexico and the US. I didn’t grow up in El Salvador or face the atrocities, or use every object in Maureen’s photos, but I am a product of them, no? Cultura shows me parts of myself that I didn’t know were me. I don’t know. Maybe that’s presumptuous. Many other Salvadoreñx/Salvadoran Americans feel unambiguously Salvadoran and are even marked as such by others; they may look at my perspective and wonder. That’s okay. That’s my point. Obviously, I am one experience. There’s no one way to be something, but we won’t know until we talk about it and share, Houston.

Maureen Penders and her photographs, for me, represent the multitudes that form an ambitious wave of Salvadoreñx/Salvadoran American art that both participates in and establishes a conversation for a Salvadoran American such as myself. Other Salvadoran Americans are/will be creators, writers, artists. Maybe we’re creating something new with all this? Can a cultura be both old and new? Both ancient and evolutionary? These photos are. We are.