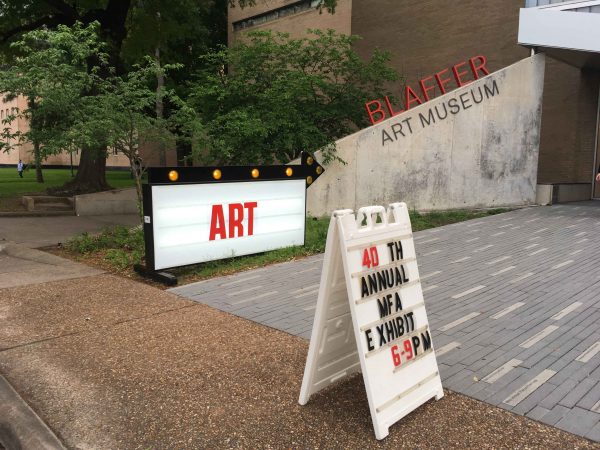 Every year, the Blaffer Art Museum at the University of Houston hosts the school’s exhibition of graduating MFA candidates. On view for only a couple weeks, the show is a culmination of what the program’s students have learned and produced during their three-year stint. While this year’s exhibition felt less cramped (it featured 11 graduating students as opposed to last year’s class of 15), I was quite impressed by the quality of the artists’ works. Here’s some of the things I liked. 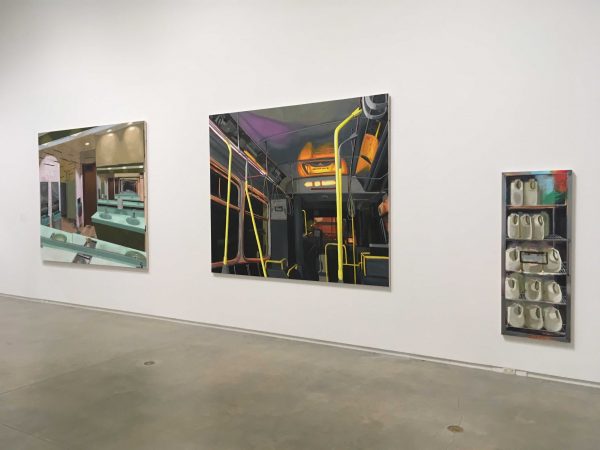 I’ve liked Charis Ammon’s paintings for a while. Along with some other UH MFA grads, her goopy, pleasing realistic paintings of sink drains and light switches were in Homelife, a 2016 exhibition at Inman Gallery. Since then, Ammon has returned to a more traditional painting style. Her two large-scale works of interiors and the faux fridge door, pictured above, have nice discoverable moments that remind me of how I feel when I see an exceptional Wayne Thiebaud. 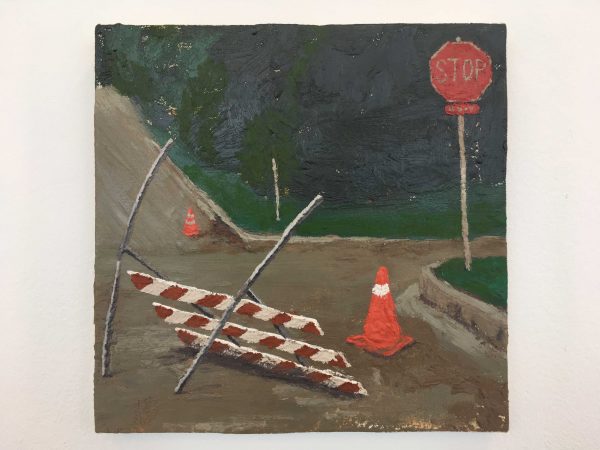 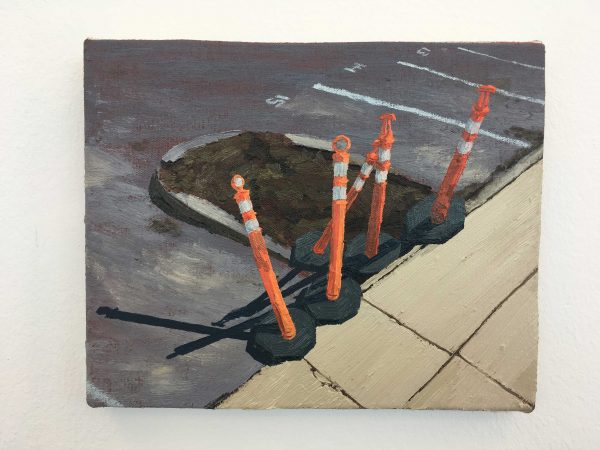 Ammon had other, smaller works upstairs that filled a narrow walkway connecting two galleries. While her larger pieces have come a long way, I still feel she works best on a more intimate scale. Painted with a combination of oil and encaustic, the works capture snapshots of a city — scenes that are familiar but not specific to a time or place. 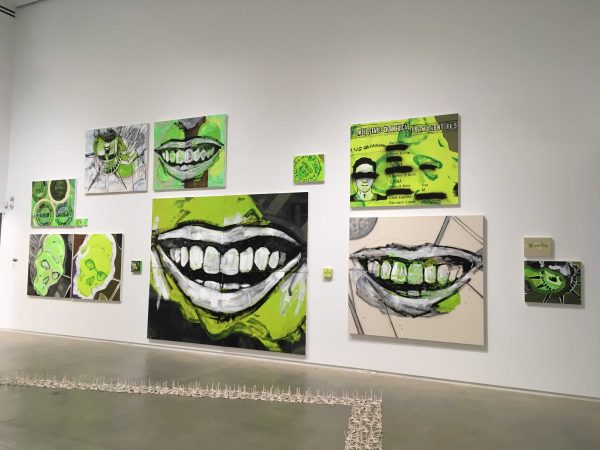 Also in the museum’s tall, central gallery is an installation of paintings by Gao Hang. The pieces are an interesting turn for the artist, as I was only familiar with his repetitious paintings of empty fields or animals (see below). There’s something alluring and unsettling about these works: their palette is off-putting and they’re either macabre or welcoming, depending on your perception of the disembodied smiles. 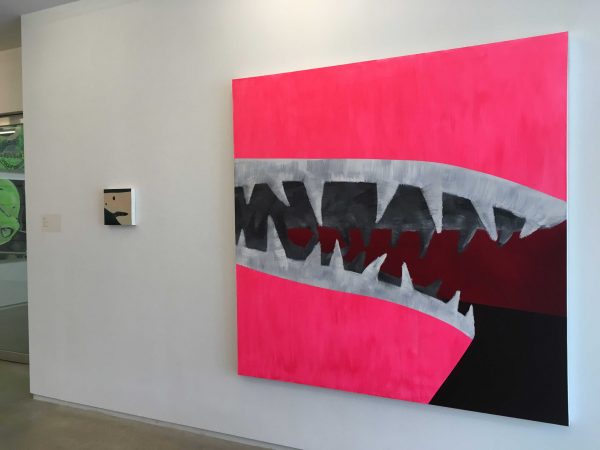 The works I’m most familiar with of Hang’s are his series of animals — sharks and bears to be precise. While some of the paintings definitely work better than others, the shark series might show the starting point of Hang’s fascination with the mouth as an unpredictable and dangerous mechanism of the body. 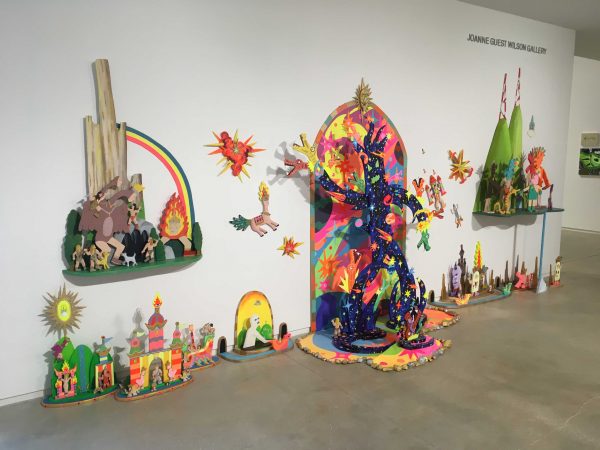 Occupying a single wall in the museum is an allover installation by Jonathan Read. Using painted wood cutouts, Read creates assemblage scenes that tell loosely mythological and autobiographical stories. No matter where his works are, they stand out because of their bold use of color.

During the opening, and periodically throughout the run of the show, Alton DuLaney’s inflatable tube man occupies the art building courtyard. It’s roaring motor powers an absurd dancing character that acts as a perfect waypoint/advertisement for what the building is used for. Even better, DuLaney says that this piece is normally installed outside of Splendora Gardens, where the artist currently organizes art exhibitions and events. 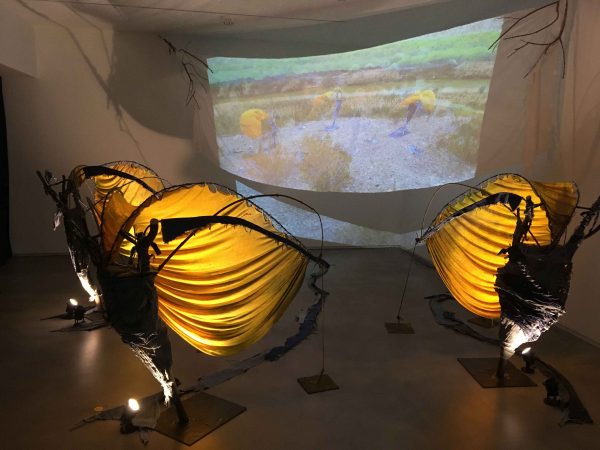 An installation and video piece by Jesus Gonzalez Jr.

In an upstairs gallery, Jesus Gonzalez Jr.’s installation made from jeans, mesquite branches, and rayon fabric is paired with a video of the sculptures in situ on the US-Mexico border. Featuring a flyover of desert landscapes and what is presumably the Rio Grande, the video shows the homespun shelters on site, as stand ins for those who have to navigate the border crossing. With a reading of Alberto Blanco’s poem Mi tribu, the piece culminates in questions asked by the artist — specifically, how he will carry his personal history throughout his life. 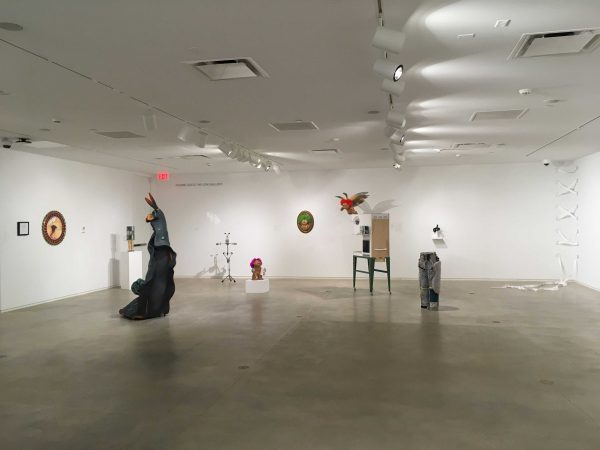 The most pleasant surprise in this year’s UH MFA show was the work of Suzette Mouchaty. A former science professor, Mouchaty decided that after teaching college-level biology for 13 years she wanted to pursue art seriously, so she applied to UH’s program. And I’m glad she did. 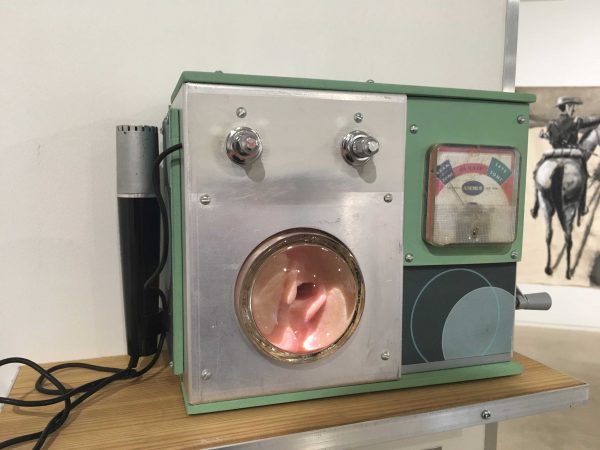 A piece by Suzette Mouchaty

Mouchaty has a knack for assemblage. Her touch is slight, at times practically invisible, but on closer inspection her intent comes through full force. One piece in the show, a cart composed of multiple smaller sculptures, includes the piece above titled Republican Series: Another Portable Pedagogical Device. Combining a microphone, a crank start, and a silicone sex toy into a Portapak-like object, Mouchaty touches on the pervasiveness of misogyny in both politics and everyday life. 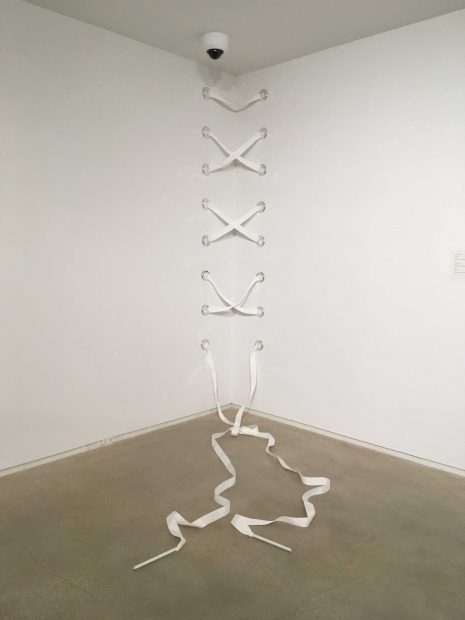 Another of Mouchaty’s pieces, Untitled (Lace Up), smartly utilizes a corner that is so often a dead space in the Blaffer’s gallery. 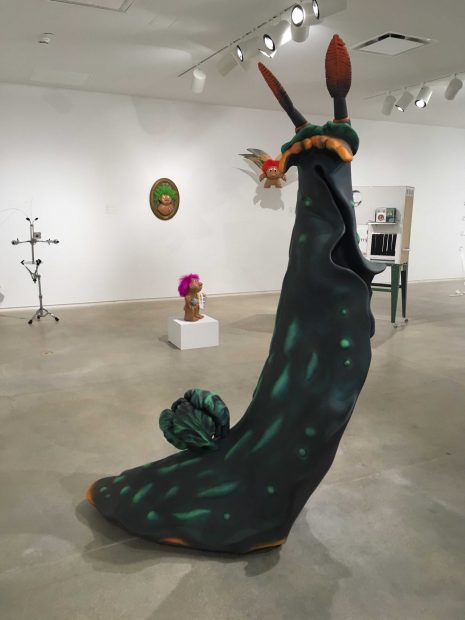 My favorite piece in the entire MFA show was Mouchaty’s Untitled (Nudibranch), an imposing, hyperrealistic sculpture of a sea slug. Made of coated Styrofoam, acrylic paint, wood, and PVC pipe, the piece is expertly crafted and pleasing to look at, but also exudes a sense of mystery. Visitors (myself included) were pulled to it, fascinated by its alien features and its smooth body. 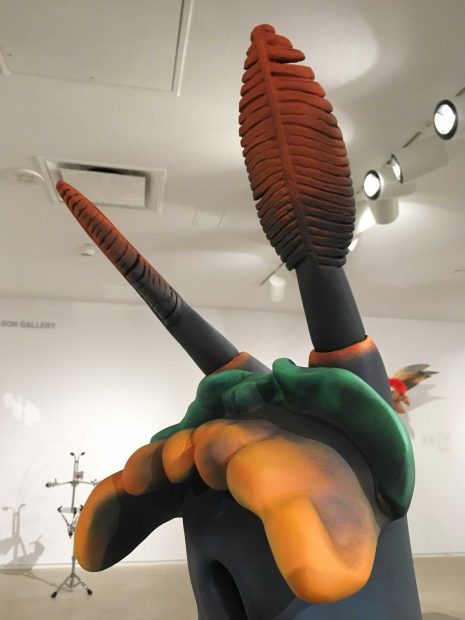 As this was one of Mouchaty’s newest pieces, made in 2018, I’m excited to see where she goes next.

UH’s “School of Art 40th Master of Fine Arts Thesis Exhibition” is on view through April 21 at the Blaffer Art Museum in Houston.