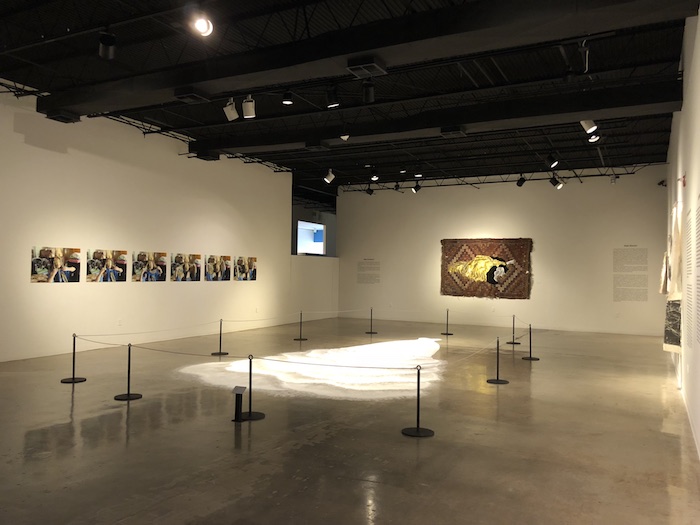 On U.S. 281 South, between Alice and Falfurrias, Texas, the scrappy mesquite trees give way to palm trees sparsely populating an endlessly flat landscape. The short ones, Sabal mexicana palm, are already blooming. The tall ones, Washingtonian robusta, or the Mexican fan palm, were brought to the region in the early 1900s to make the area appear more exotic in an effort to attract settlers to the land. In a similar, twisted way, developers (or land promoters) decided to call the area “The Rio Grande Valley” even though it’s a delta, not a true valley. Freezes in the 1980s killed many of the palm trees and now, they look like abandoned centennials, forever guarding their post.*

Driving around the towns of Misson, McAllen and Edinburgh, where the main campus of the University of Texas, Rio Grande Valley is located, does not feel like you are in Texas or Mexico. It is a place loaded with what Roland Barthes in Camera Lucida called “punctum.” In a photograph, an object or image can unexpectedly jump out like an “accident that pricks and bruises.” It is that rare detail that ends up filling up the whole image, making it resonate.

The metropolitan area of McAllen, Edinburg and Mission (population of 842,304) is number one on the list of America’s poorest cities. The other major metropolitan area in the Valley, Brownsville and Harlingen (population of 422,156) is number two on the list. The poverty, like the wind and dust, is tough and persistent. Students at UTRGV come from the region (92.8%), are of Mexican-American descent, and are often first-generation college students. Many come from low-income families and most are working full-time or nearly full-time. But as the visionary, force-of-nature and founding Dean of the College Fine Arts at UTRGV, Dr. Steven Block, remarks, the “adjective ‘impoverished’ only refers to financial status and how that in turn, can affect the quality of K-12 education in RGV. The culture that informs the potential for student artists however is rich and reaches back further than the few years the United States has existed.” 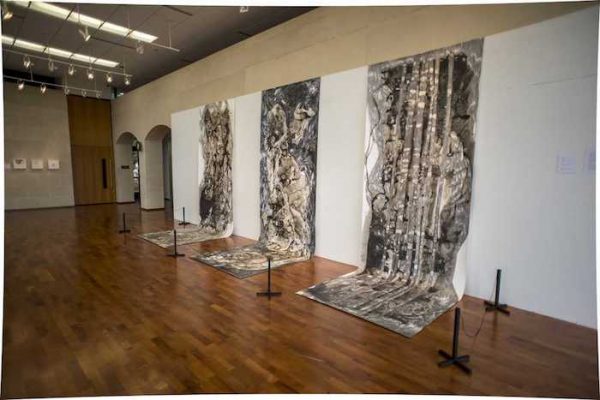 FOLD: Art, Metaphor, and Practice is more than an exhibition. It is an incredibly ambitious, complex and large-scale project that includes: an exhibition of thirteen international women artists from Brazil, Cuba, Ecuador, India, Iran, Italy, Mexico, South Africa, South Korea, Turkey, United States, and Uzbekistan, presented in three venues (UTRGV’s Visual Arts Gallery in the School of Art College of Fine Arts, its Visitors Center, and the International Museum of Art and Science in the nearby city of McAllen); lectures by scholars; a panel of five UTRGV faculty presenters; and performances. FOLD is also a partnership with the University and FESTIBA (Festival of International Books and Arts). Founded twelve years ago by Dr. Dahlia, UTRGV’s Assistant Vice-President of Public Art, FESTIBA is an expansive community-wide event that brings K-12 students to campus, gives away books to children, and puts writers directly in touch with school groups.

The heart, soul and driving force behind the FOLD project is Raheleh T. Filsoofi, an Iranian-American artist and educator. She took her cue for FOLD from her reading of the book Fold by the postmodern French philosopher Gilles Deleuze. In Deleuze’s books on Foucault, Leibnez and other philosophers, Deleuze sees his own thoughts to be “folded” or “doubled” into the thought of another. There are a variety of modalities of folding — from the fold of our material selves to the folding of time, or simply, memory. Basically, the concept of folding — bringing that which is outside inside — is a way of looking at subjectivity, or a topology of different kinds of folds. As Filsoofi mentions in her curator’s statement: “…folds change identity — now you see one side, not the other. Folds conceal things, like secret knowledge that can only be revealed through unfolding.” 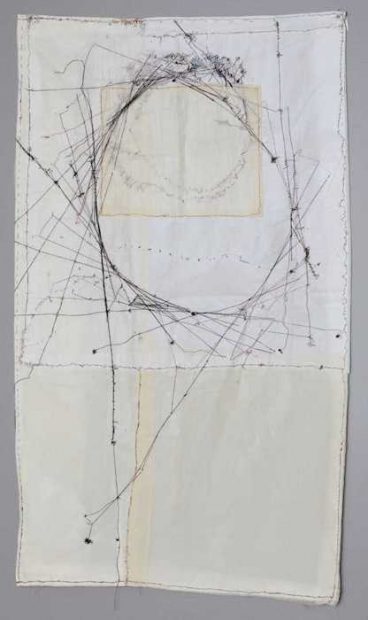 But thankfully, Filsoofi took her inspiration for the overall project by actually looking at works of art and how individual artists explore the literal, conceptual, and metaphorical aspects of folding in their work. She did not instrumentalize art or use it to validate Deleuze’s theory. (Nor did Deleuze write about the work of painters, filmmakers and writers to validate his concept.) Of late, there are too many group exhibitions, biennials, triennials, etc., in which curators use ideology, economic theory, or socio-political policy such neoliberalism or late-capitalism to explain what is going on in a work of art. Art is “belabored,” as Jerry Saltz wrote of the New Museum’s recent, fourth Triennial. Of late, in this political environment, art is expected to solve the ills and failures of the world. Artists are called on to be socially responsible. 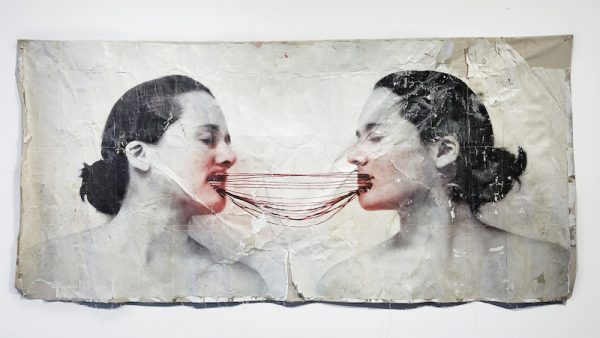 In spite of the serious challenges to mounting an ambitious and timely exhibition in the region — e.g., the Art Department and Gallery is in a strip mall among many strip malls and fast food restaurants — Filsoofi has managed to create thoughtfully edited installations. Individual works breathe and enhance other works. With most of the work in the show, there is a folding or interweaving of the somatic and psychological, private and public. Issues of race, identity, and gender predominate. 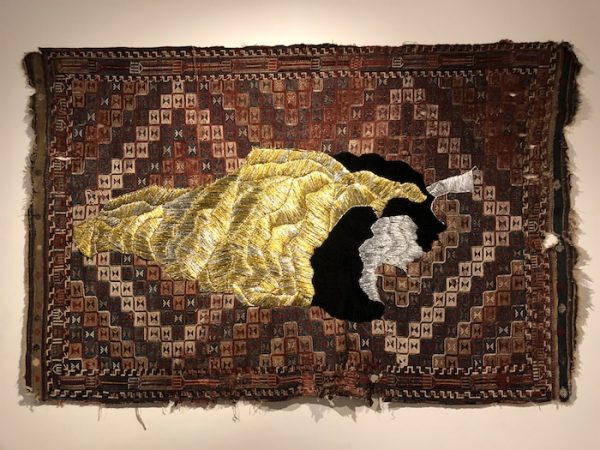 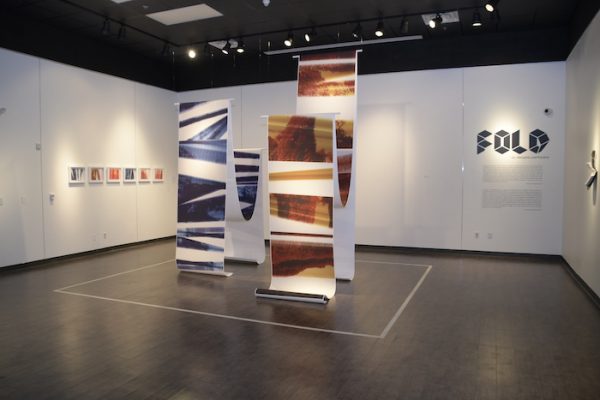 There are several highlights in exhibition. Amber Scoon’s subtly layered, folded and stitched delicate pieces of fabric (a process she began over a decade ago with fabric she found at a market in Lisbon) are literal yet poetic passages of time and memory. Sibel Kocabasi’s embroidery of synthetic gold and silver metal thread (from emergency foil blankets to keep refugees warm) on an old, well-worn Turkish-Zili rug employs the power of pattern and decoration to convey content and meaning. The fading, decaying image of two women ritualistically joined at their mouths by bloodied threads, by Anja Marais, are beautiful and unnerving. Supporting the image are layers of worn, manipulated and torn paper that bring palpability to the alienation, suffering and pain of these two women. Isabel Gouveia uses a printer and interruptions in the printing process to make layered images of trees on large ribbons paper, which are hung from the ceiling at various heights. For Gouveia, the shaping, folding and unfolding from printing interruptions express entropic interruptions in the continuous flow of time and space. On three large-scale scroll like works on paper, Misoo Filan has created layers of cascading mysterious, turbulent and even violent forms through a rich mixing of ink and pencil in shades of black and brown; there is an atmosphere of things revealing and at once concealing. 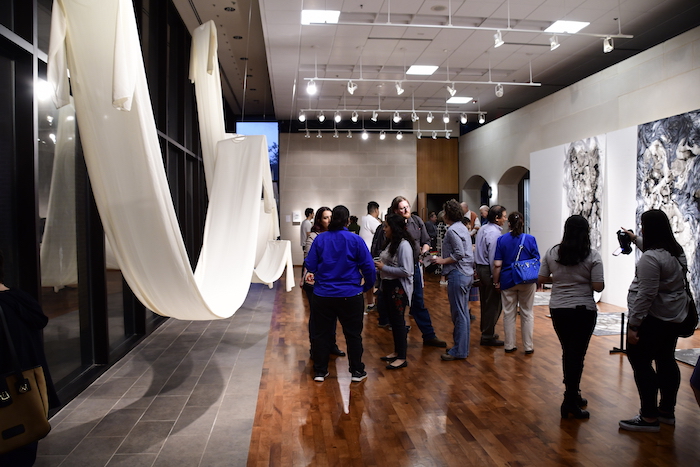 Each of the participants on the panel I attended, Unfolding Social Issues (held on Tuesday, February 26) presented informed, intelligent and clear talks, which expanded the meanings of fold and brought a better understanding of the works in the show as well as the writings of Deleuze. Dr. Cathryn Merla-Watson (faculty in Literature and Cultural studies at UTRGV) presented an excellent example of how students, or anyone for that matter, should think critically when reading texts such as those by Deleuze and his collaborator Felix Guattari. Feminists scholars have criticized Deleuze and Guattari’s concept of “becoming-woman” and “how it ignores context and the shifting and relational intersections of race, class, gender, sexuality, ability, among other categories.” Young Rae Oum (faculty in the Sociology Department) presented a paper that used an analysis of autobiographical narratives by Korean American women to highlight how identity is constructed through the telling and retelling of the self to different audiences; how stories are modified, edited, embellished, and expanded with each telling. 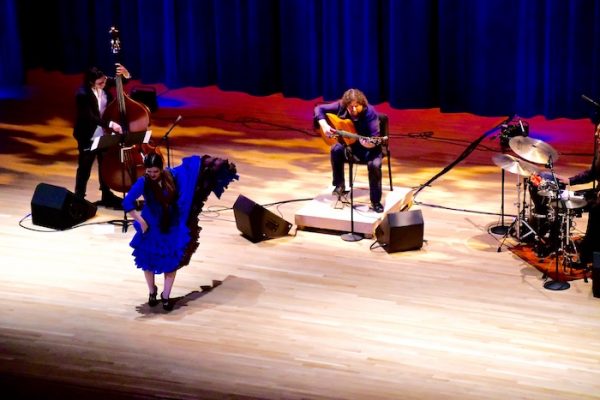 A FOLD performance: Niurca Marquez at the Performing Arts Complex at UTRGV

Dr. Mariana Alessandri (faculty in Philosophy) discussed how identity could be perceived through language, giving an example of the difficulties faced by the late poet, writer, and scholar of Chicana culture, feminist and queer theory Gloria Anzaldúa, at Pan-American University in the late 1960s. “Anzaldúa had been, to some degree, folded up by the University, forced to take two semesters worth of speech, which met every day of the week for no credit, with the intention of ripping off her perfectly Mexican-American tongue.” Dr. Ruby Clark (faculty in the Clinical and Developmental Psychology Department) talked about sexual victimization taking on a severe form when a female is caught in the folds of sexual victimization and experiences victimization at various developmental stages of her life, referred to as revictimization. She discussed behavioral and psychological mechanisms that put women at risk of sexual revictimization during adulthood. 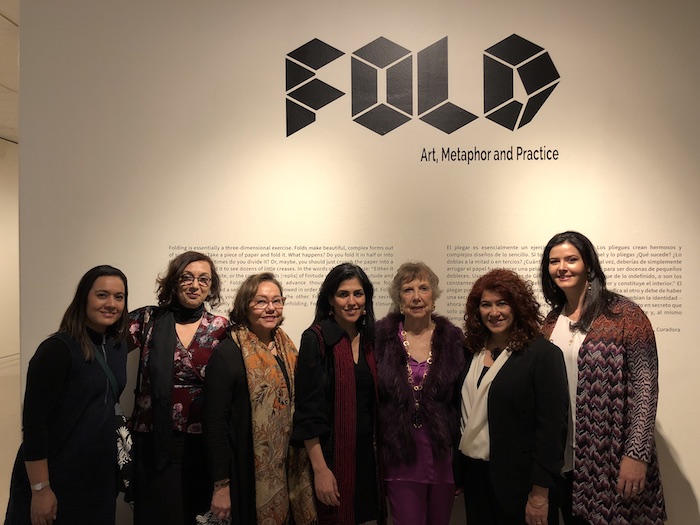 The FOLD project offers an example of a successful collaboration between departments in a university and with their community. The few people I met in the short time I was there seemed to have a real sense of purpose and clear vision.**  They wanted to be there in the Valley and at UTRGV. But UTRGV is not without serious challenges. It was “created” only a few years ago with the consolidation of the University of Texas at Brownsville/Texas Southmost College, the University of Texas-Pan American, and UT Regional Academic Heath Center-Harlingen. Some see the process that UTRGV is going through as a “transition,” others a “creation.” There is old and new faculty. Some want to “keep it as it was,” others want it to grow into a “research university” of national importance. Change is tough. For any type of institution, university or museum, finding the right balance between respecting the past and embracing future possibilities is not easy. But I’m putting my money down on UTRGV to show us how it can be done.

* It has been said that this 100-mile stretch of land from the border is as deadly, or more so, than the 1,000 miles migrants from Central America must traverse. Since 2009, the bodies and remains of more than 550 undocumented migrants have been discovered in Brooks County; those are only the ones actually reported. No other Texas county has discovered more migrant bodies than Brooks County. Why is this? Many people say it is because of the Hebbronville and Falfurrias checkpoints that are inland. To avoid these checkpoints, migrants have to trek out into a harsh, hot, and unforgiving landscape, usually without enough water and supplies.

** I want to express my appreciation to Filssofi, Dr. Block and the panel participants for their generosity and time. I was so taken by their passion and commitment that I wrote each an e-mail, asking questions about their teaching philosophies and students, and what changes at the University they would like to see. But, because of time and space, it was not possible to include their thoughtful and eloquent responses in depth and do them justice.

Suzanne Weaver is the Brown Foundation Curator of Modern and Contemporary Art at the San Antonio Museum of Art.