Stuart Hyatt and Heather Scott Peterson Turn on the Lights 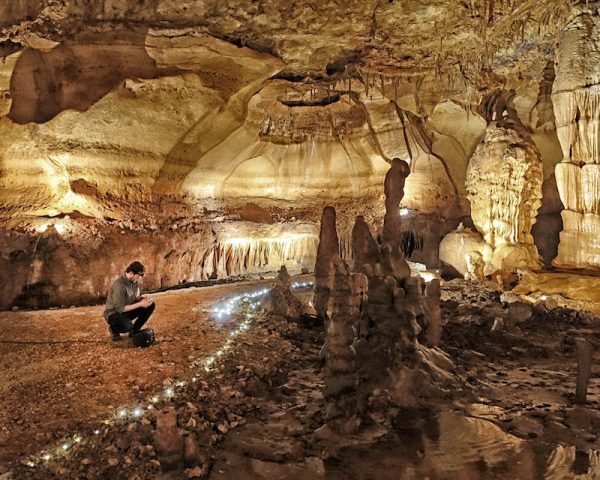 Discovering a cave with expansive chambers and intricate geological formations must be like being visited by aliens or a vision of a deity — a moment that forms the open parentheses of one’s life, an ineffable cloud of astonishment hanging over the curves. In 1935, Mary McGrath Curry and her brothers discovered the main chamber of a cave near Boerne, Texas. In a later competition to name the cave, the winner was a boy who said the cave was too beautiful to have a name and so it became “Cave Without  A  Name.”

Stuart Hyatt’s ambitious, multifaceted project, Glen Rose Formation at the TXST Gallieries in San Marcos, takes its name from the fossil-rich strata of rock that transects the central Texan region. Through videos, poetry, music, and sculpture, Glen Rose Formation seeks to (perhaps fleetingly) capture the wonder experienced by Curry and her brothers.

In the video, Curry reads a poem by Cecily Parks about the discovery of the cave, while dreamy, idyllic images of the Hill Country from Hyatt’s many visits are superimposed over Curry’s face. A Gavin Bryars’-like suite with slow motion pedal steel, strings and horns lilts over the images and the poems, and the effect is akin to the transcendent “television operas” like Perfect Lives. Hyatt seems comfortable with the melancholy; a moment of the sublime cannot be recreated, but can be briefly conjured like shadows on the wall of… a cave. At one point in the poem, Curry describes how certain parts of the cave seem to have a energy, a desire to be seen. Later she plaintively states, “Complete peace and quiet.” This coexistence of dynamism and serenity articulates the feeling Curry describes: “After I got into the cave it was as if the cave had turned its lights on.” The living world is a ubiquitous notion that doesn’t mean that much to us because we live in our heads amidst a roil of bubbling, perceived crises. 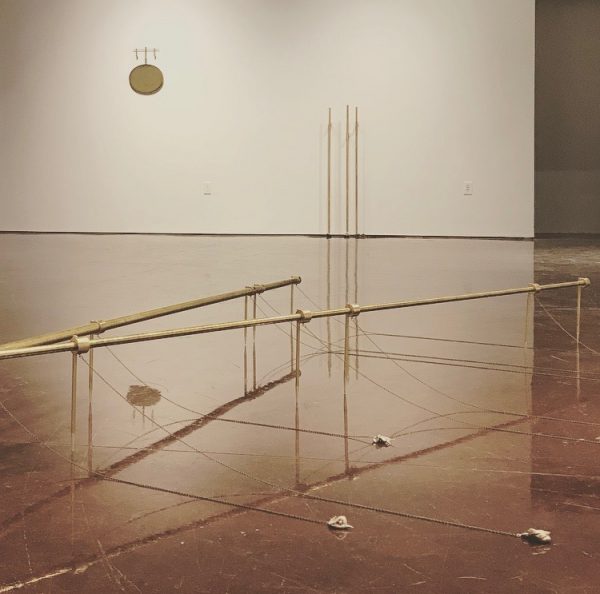 The sculptural element of Glen Rose Formation reiterates the theme of vibrations and vitality intrinsic in the earth. From the exhibition pamphlet: “The large wall assemblage of Texas geological maps have been wired up for their geophony (a term popularized by the American musician and soundscape ecologist Bernie Krause to describe earth sounds). Vintage vitrines contain mysterious artifacts representing the region.” The cables from the maps connect to a large mixing board on top of a pile of dirt in the center of the room, suggesting that resonant frequencies of caves in central Texas and throughout the world are “mixed” by some force. The vitrines also emit a resonant sound charging the artifacts with a life force. 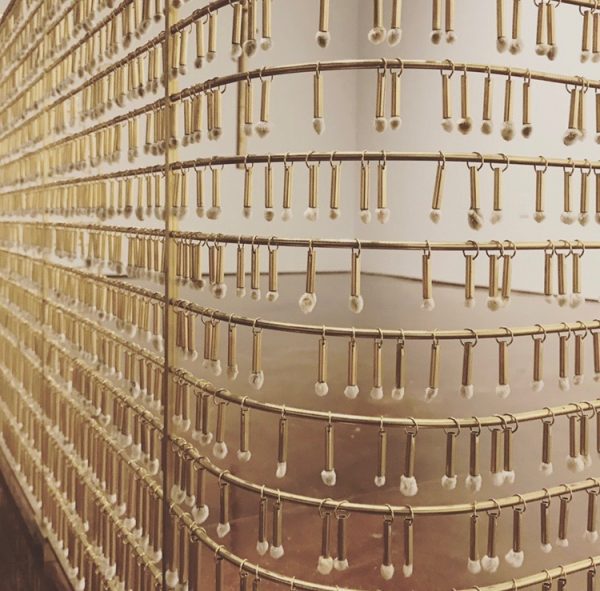 The overall effect of the show is simultaneously soothing and elusively inspiring. It will conclude with a live performance of the “score” in the actual cave, with Curry reading the poem in person. This is a fitting end to this beautiful and profound paean to life and mystery. As Curry says: “I was never afraid.” Wonder without fear sounds pretty close to enlightenment; if you’re lucky you may experience it once or twice in your life.

Also on at TXST Gallieries, Heather Scott Peterson’s Temporary Measures forms a ballast to the ethereal ambience of Hyatt’s Glen Rose Formation. Similarly concerned with time, geology, and the inexorable energy of the earth, Peterson’s works in brass and copper have an intricate, coiled tension — their temporary constraint as objects forged by humans is but a moment compared to the rest of their lives sleeping in the earth. As the exhibition pamphlet states:

“Copper and zinc — the elements that conspire to form the idiom of brass — are shaped by metamorphic processes beyond our conception of time and scale. Brass is a material more closely aligned with the provisional dynamics of science or the utility of the applied arts than with the presumptive permanence of sculpture. Its resistance to corrosion and wear allowed the esteemed clockmaker John Harrison to harness geographical longitude with the gearing of the first sea clock, and its acoustic and bactericidal properties underwrote the flare and luster of Dizzy Gillespie’s trumpet.” 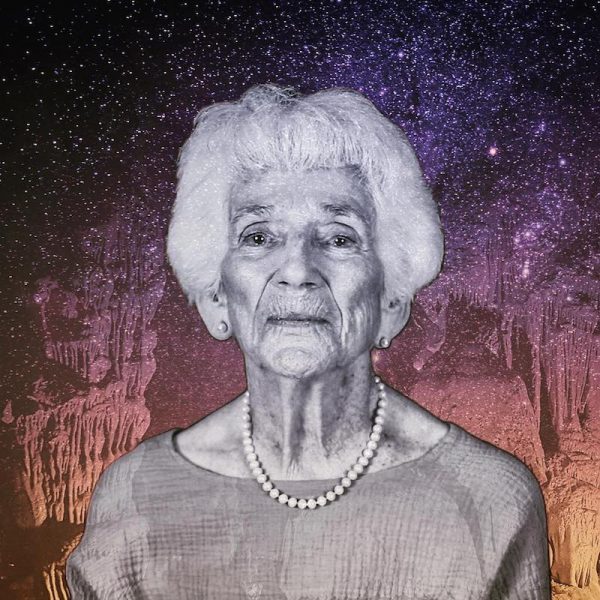 As Glen Rose Formation reflects on the dreamy grandeur of nature, Peterson’s precise pieces embody the power and magic of the materials of creation. The greatest alchemist is the earth, and the journey of brass is far more epic than that of any human who briefly controls it. In the exhibition statement: “After several million years, the violence of geologic time may usher forth an unrefined bit of gold onto the shoal of a river, the possibility of a goldsmith one day fashioning a coin, and, eventually, the coin’s surrender to another depositional affair in the tectonic envelope.” The pieces have current — a drive — as if they are in transit and this stop is so brief as to almost never happen at all. The cyclical nature of a material such as brass, out of the earth and back into it, echoes the scales played by jazz horn musicians.

These two shows do not feel “contemporary” but rather timeless, pondering old things that answer through existing. Each one is its own geological formation, or the simulacrum of the same, engaged in the neverending struggle of turning on one’s lights.