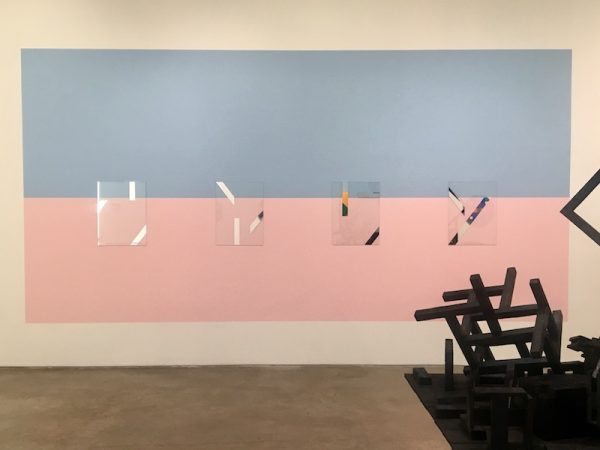 Summoning the ghosts of Mikhail Matyushin and Alexander Rodchenko, Anton Ginzburg’s show Construction Proxy, currently on view at Barbara Davis Gallery in Houston, claims to explore “notions of aura, materiality and historical memory” via a kind of splicing together of Russian Constructivism and Western post-war modernism. While this may be Ginzburg’s personal and intellectual exercise to realize the work, it doesn’t necessarily mean that’s what the work is actually doing. So if Construction Proxy is simply pointing to history rather than embodying its tenets, it raises the question: why are we all relegating this work to an 8th-grade book report on modernism?

These paintings are not auratic. They are fundamentally semiotic, which is far more interesting anyway. The rapid-fire seriality of this work undercuts the time the viewer would need to conjure and engage in aura. As our eyes dart in succession from one painting to the next — as if we’re reading a scrawling line of text stretching around the room with the rapidity of machine gun fire — we follow a natural inclination to parse out difference among paintings that are largely similar. Therefore, the viewer’s role here becomes one of a decoder rather than a passive participant awash in aura or some historical investigator.

The coding is most aggressive in the gallery nearest the entrance, housing mostly the ORRA_C series (all 2017). Displayed like a playful sampling of breast pockets, Ginzburg employs a kind of visual violence as thick, colorful lines thrash diagonally at each paintings’ lower border. The centrally located diamonds — depending on color — alternately read as portals or inhibitors. Ultimately, we are left to ponder on their adjacency rather than consider them individually, as if we’re piecing together a sentence in a foreign language. 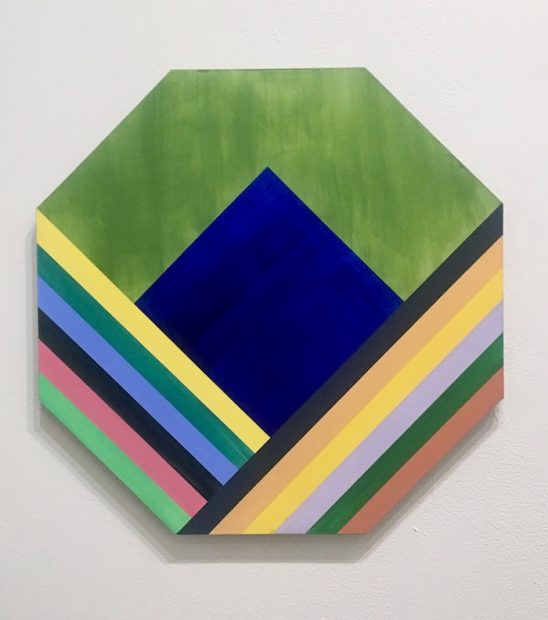 The entire ORRA series in this show are octagonally-shaped and roughly the size of a stop sign. Ginzburg does the work the most justice when he treats them as what they are: signs. Moments of opacity and rigidity read effectively as signage. The evidence of Ginzburg’s hand — for example, with the delicate, painterly green brushstrokes of ORRA_2C_05 — consequently serve as a distraction. The ORRAs should be considered for their syntax, not their handwriting. 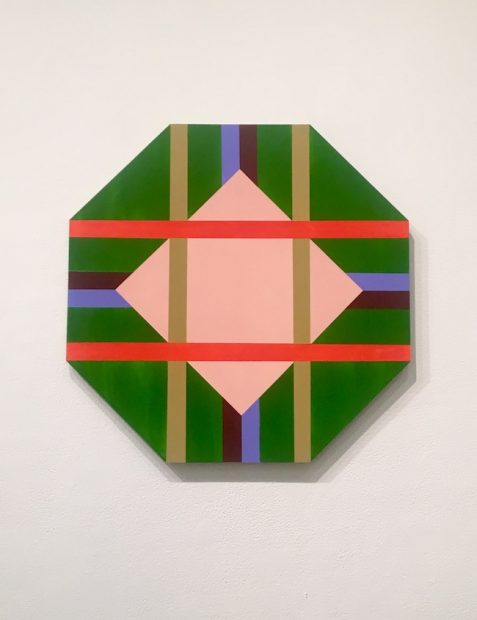 ORRA_2D_03 (2017) is the best example of opacity within the series. Though we see little to no evidence of his hand here, the work is paradoxically more human: a diamond of flesh buckled in by Boy Scouts of America lines on a background of tablecloth. There’s something apple-pie American about this painting, yet the sharp angles feel perverse and violent, the lines reading like restraints. 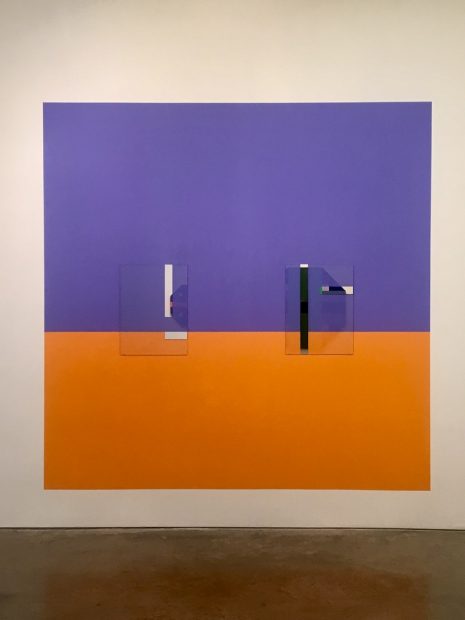 But it’s the combination of the COEV Compositions (2016) with the Houston Color-Space Initiatives (2018) that translate the most effectively as language. The simplistic, binary-colored murals bracket off the gallery space in a way that reads as paragraphs. They form a kind of parenthetical guideline for the mirrored COEV lines to play and compete with each other. Digging underneath, resting atop, burrowing through — but nevertheless persistently engaging with — a horizon line, with the mirrored lines creating a tightly-controlled display of chaos as they reflect back the other lines from the ORRA paintings in the space. They in turn become yet another form of flickering signage, constantly changing based on the viewer’s perspective. While Houston Color-Space Initiative #1 reads too closely as an obvious gender binary, Houston Color-Space Initiative #2 is a much more believable landscape painting that allows us time to consider the COEV Compositions not just for their sentence structure, but also as characters, tools, and landmarks.

On view at Barbara Davis Gallery, Houston, until February 17, 2018.