For the past ten years, Houston-based artist Gabriel Martinez has been challenging our ideas of what an artist’s practice can look like. By drawing on the subtleties of daily life as seen through the roving nature of Guy Debord’s Theory of the Dérive, Martinez has found simple actions that, when implemented, change our perceptions about our sense of place. The artist’s hand in each of his projects is generally slight, and can be mistaken as the action of a non-artist: a city contractor, an unmindful shopper, an inattentive gardener. In other words, Martinez’s work doesn’t come from a traditional language or material of high art, but instead is relatable and familiar, stemming from the physical interactions Martinez has with the city. 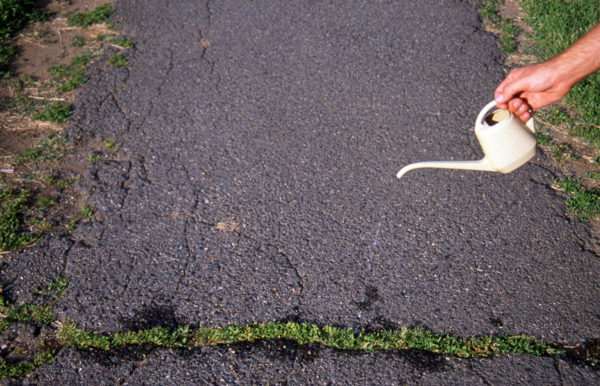 Cracks in the pavement are watered with Miracle-Gro, 2006

Some of Martinez’s best works survive only as photographic documentation. In 2006, while walking a daily route, Martinez noticed a particularly large crack in a blacktop path in which grass was struggling to grow. So he started regularly dousing the crack with Miracle-Gro, to assist nature in its takeover of the city. Martinez’s other pieces involve the artist sprucing up ignored, unkempt parts of urban infrastructure and architecture: he’s cleaned and polished drainage grates in Damascus and New York City; has taken it upon himself (in the dead of night) to steal, repaint, and replace the weathered signs of small businesses; and has used found lumber to build benches for standing-room-only bus stops. 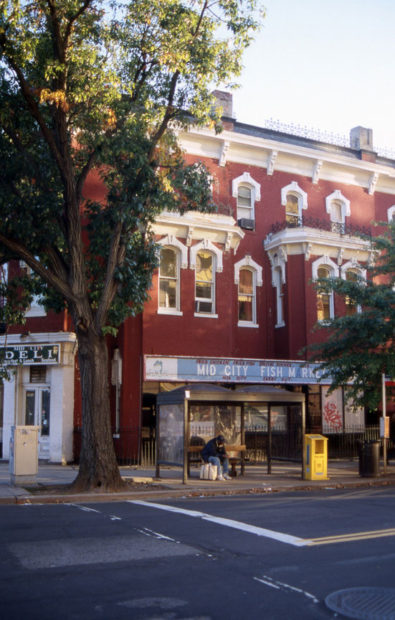 Benches are made from found lumber and delivered to bus stops without seating, 2005-present

Other projects are more overtly humorous, like Martinez’s 2006 piece The stipend from an art show — succinctly explained on the artist’s website: “The stipend from an art show is shared with shoppers who have similar tastes by placing twenty dollar bills in items of clothing that I like.” This work is a perfect example of the democratic, experiential nature of Martinez’s art — his one simple action has a ripple effect that continues well past his initial act. The magic isn’t in its documentation, or in the action itself. The actual art is that an individual recipient of an unexpected windfall experiences something unknown to the artist. 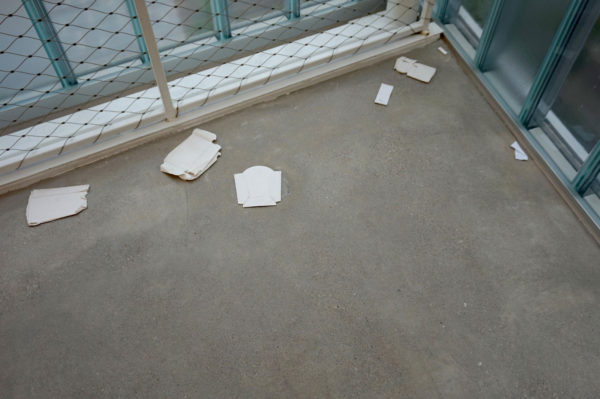 In Martinez’s first solo museum exhibition, Everything Turns Away Quite Leisurely, now on view at the Blaffer Art Museum in Houston, this experiential aesthetic is honed and delivered in the museum’s upstairs galleries. Anchoring the show at the top of Blaffer’s stairwell is an almost invisible installation of pieces from Martinez’s Trash Ghost series. Inspired by the discarded objects that litter the city, each element of the installation laboriously recreates trash the artist finds on the streets: flattened cigarette packs, paper cups, and Styrofoam containers are missing their labels and become almost abstract silhouettes of their former selves. We’re so used to ignoring this kind of detritus that I barely noticed it at first. My sentiment was echoed when, during an artist talk, visitors unwittingly stepped on the art. Even putting recreations of these objects into a museum doesn’t necessarily change our awareness of them. 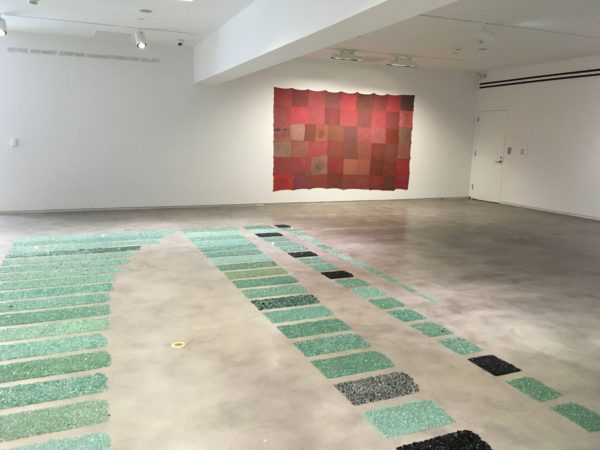 The main focus of the show, in the Blaffer’s largest gallery, is The Long Poem of Walking, a collection of car glass the artist found on the streets of Houston. Arranged by quantity, the rectangles of glass recall the minimalist floor works of Carl Andre, but carry an air of fragility and human history. Instead of cold copper or stone, the shards have a gleanable backstory; they originate as a broken headlight, a smashed window, or a fender bender. Martinez collects from the streets and washes this glass in a way that mirrors a prospector panning for gold — it’s treasure that’s ignored or forgotten by those who fail to look under their feet. Sharing the spotlighted gallery is a list of streets from which the glass was gathered, with the routes’ names arranged by diminishing size. The white vinyl lettering on a white painted wall is faint at first; the text is noticeable only at certain angles. Again, the ghost of the city invades the show. 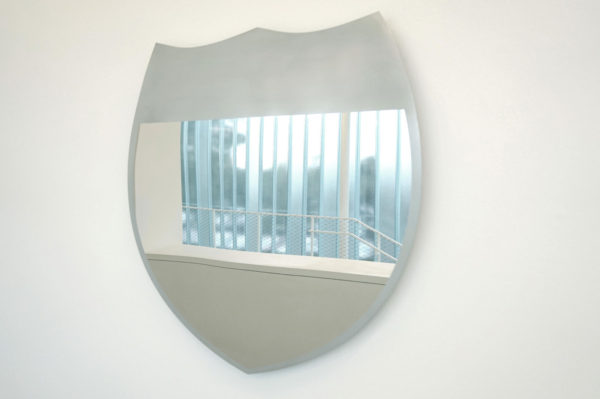 Martinez’s focus on car culture continues throughout other major works in the exhibition. Differential, a quilt made from mechanics’ rags, transforms the stains and spills of oil changes and engine grease into abstracted marks made in partnership by hand and machine. Each rag has a personality and a color, and though they’re all red, no two are alike. In the museum’s hallway, three larger-than-life, mirrored steel interstate signs have shed all telling text and numbers, leaving only shield-like outlines. In reference to Eisenhower’s Interstate Highway System, the work makes us confront the signs we encounter daily but never actually look at. When paired with Martinez’s vellum print of a bomb-target zone over a city center, we see that urban sprawl is not solely an end result of unchecked capitalism, but also a product of our government’s attempt to control our safety, prosperity, and self-preservation. 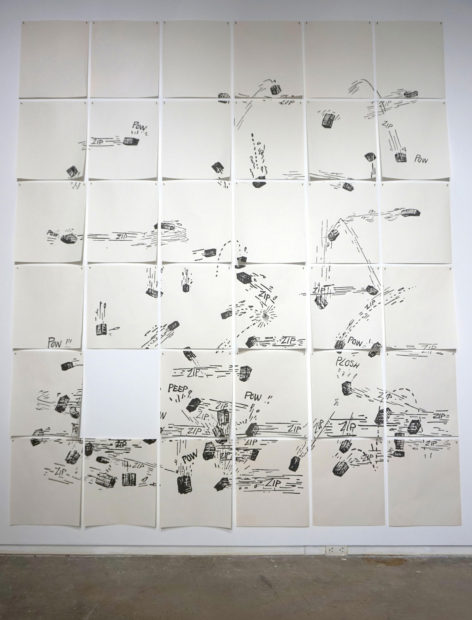 Works in another gallery at the Blaffer come from Martinez’s recent residency at the Hyde Park Art Center in Chicago. Focusing on the brick as the literal building block of our society, the works tease out both the destructive and expressive power packed into these small, rectangular objects. For Wildcat Strike, the artist collected George Herriman’s Krazy Kat comic strips and erased everything in the story except for flying bricks and their onomatopoeias. (In the comic, a mouse named Ignatz continuously throws bricks at a cat named Krazy. Ignatz’s throws the bricks out of resentment, but Krazy believes they’re tokens of the mouse’s affection.) Decontextualized from their original narrative and interweaved, the bricks become a map charting urban conflict through imagined violence. So too is American Bond, which is a painting made from Pullman brick dust on unprimed linen. Created without fixative and displayed upright, the piece is a sculptural critique of painting — the fine dust penetrates the linen, making the back of the piece as important as its front. 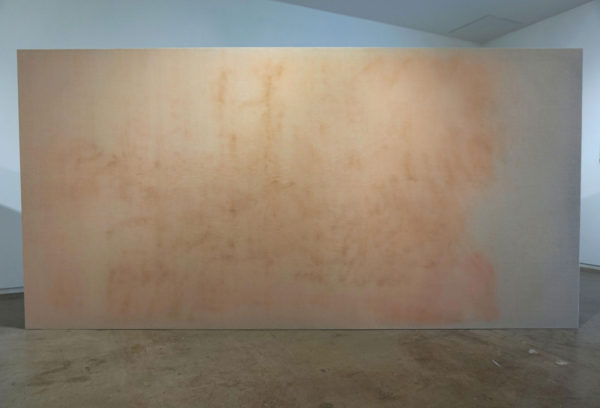 Martinez’s works are successful in their accessibility. Symbols, signage, and discarded objects are democratic in nature — they provide a recognizable entry point for most all viewers. And yet Martinez’s works are so multi-dimensional that they satisfy even the most astute visitor, giving winks and nods to art history, pop culture, and our evolving collective consciousness. Leaving Martinez’s show, I felt more in tune with the elements that make up my city. And for the first time in a long time, I felt the need to look down.

Everything Turns Away Quite Leisurely is on view at the Blaffer Art Museum in Houston through January 27, 2018. You can see more of Martinez’s works on his website.