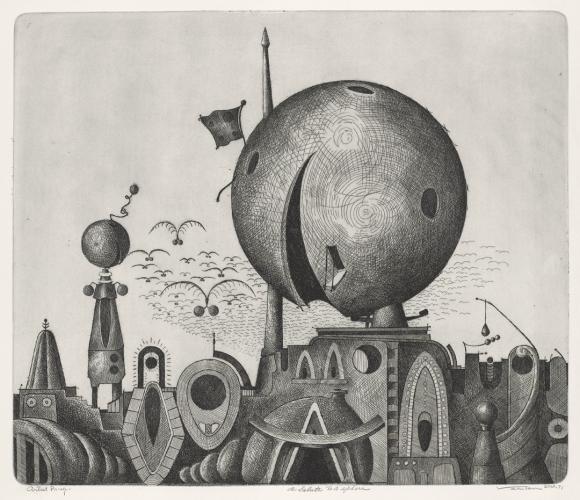 Valton Tyler, whose excellent recent retrospective at the Amon Carter Museum of American Art in Fort Worth has been a critically acclaimed highlight of museum exhibitions in Texas in 2017, died yesterday, Sept. 25, in Dallas after a brief illness. He was 73.

Tyler’s Invented Worlds of Valton Tyler ran from February 11 through April 30 of this year at the Amon Carter. The self-taught artist lived and worked in Garland, Texas, and has been represented for many years by Valley House Gallery in Dallas.

From a statement by Valley House today:

“In 1970, when Donald Vogel, artist and founder of Valley House Gallery, was first introduced to Valton Tyler and his drawings, he made arrangements for Valton to learn printmaking techniques from SMU professor Larry Scholder. Two years later, in 1972, Valley House published the catalogue, The First Fifty Prints: Valton Tyler.  Donald Vogel’s commitment to Valton Tyler’s work continued until his death in 2004.”

“I would often hear my father say of Valton that he was the most creative force that ever came out of Texas. As I have been an art dealer and an observer of the Texas art scene for over 45 years, I believe his assessment of Valton to have been accurate. Valton was a visionary artist who was born gifted with the innate ability to clearly translate his vision to paper and canvas. Even though his personal iconography seems like a foreign language on first encounter, it is understandable if given enough time.”

“With the passing of the Dallas-based artist Valton Tyler, a proud Texas native, modern art has lost one of its great and most original visionaries. Only in recent years, as the broader art world has begun to grasp the scope and significance of the completely self-taught Tyler’s contributions to the diverse language of modern art, have the power and uniqueness of his expressive vision in oil on canvas and in pencil on paper, some of art’s most basic and essential materials, started to earn for this remarkable artist a long-overdue place in modernism’s canon. The art history that must be done to secure that place and to deepen and broaden our understanding of Tyler’s achievements — that work begins right now.”

Valton was so underappreciated in Texas. So sorry to hear of his passing.

It is Grove Hill Cemetery on Samuel Blvd.

I am so sorry for the loss of Valton. I met him in 2001 and he taught me a few things. My painting style changed because of him. I will miss him a lot. The world lost someone who was kind and loving, but most importantly an authentic artist.