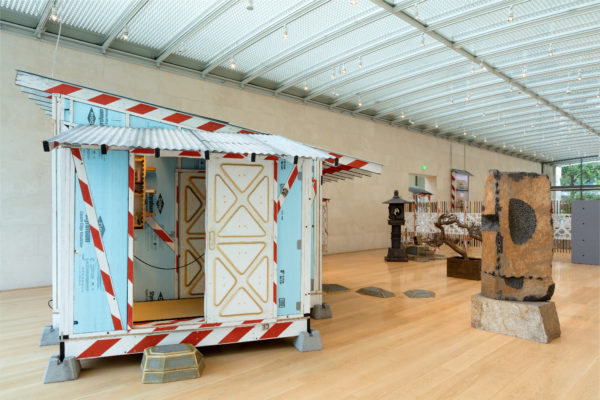 Tom Sachs is one of the more sentimental artists I’ve come across, though I’d guess plenty of people who like his work read a certain amount of irony into it. I don’t. I think Sachs is generally sincere in his exploration of systems, design, symbols, and materials, and I think that over the 20 years his work has been in the public eye, he’s given tremendous permission to several generations of younger artists to embrace the part of themselves that geek out on gadgets and have a tendency to collect and craft. He’s also validated, again and again, all the meaning people attach to personal objects with the considerable force of their own emotional sap. 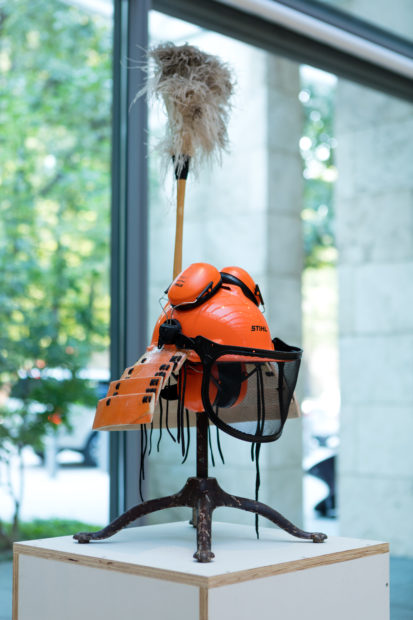 I’ve found Sachs’ work lovable for a long time, but coming across his work in person is a great reminder of how satisfying it is to spot a fellow sentimentalist. Sachs’ obsession with how humans construct (and, crucially, reconstruct) objects and institutions — and through those, to create meaning and metaphorical weight — runs though his various bodies of work. His constructed objects, which are his most consistent work, are fictional — facsimiles of familiar things — made up of common materials, and his hand is always visible. This is Insta-gettable, as in, Oh, a boombox made out of cow horns and a walki-talkie!, but that doesn’t discount the thought and organization that went into the design and making of the thing. This is why Sachs’ work is so popular with so many. His work endorses a number of very human impulses all at once, given that for many of us an ideal experience is one that magically combines the comfortingly familiar with the thrillingly novel. We also love things. We’re acquisitive, and we like spotting patterns. Sachs scratches some itches. 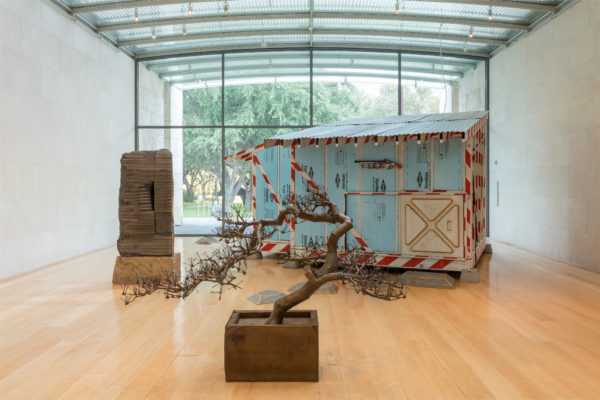 Unsurprisingly, given his own emotional attachment to made things, threads of his own previous bodies of work run through his current work — especially his ongoing obsession with our space program. Tea Ceremony is his solo show at the Nasher Sculpture Center; he conceived it originally for the Noguchi Museum in New York last year, and a reworked iteration of it opened this last weekend in Dallas. It’s really a big installation, dotted throughout with Sachs’ constructions, and with a life-size Sachs-built tea pagoda as its focal point. This is where, back at his studio in New York, Sachs spent several years evolving and perfecting his own version of a traditional Japanese tea ceremony. He trained with tea masters. And according to Sachs (and the tenets of Zen Buddhism), this is not a process that will end anytime soon. The whole show is open to his indefinite tweaks and modifications. 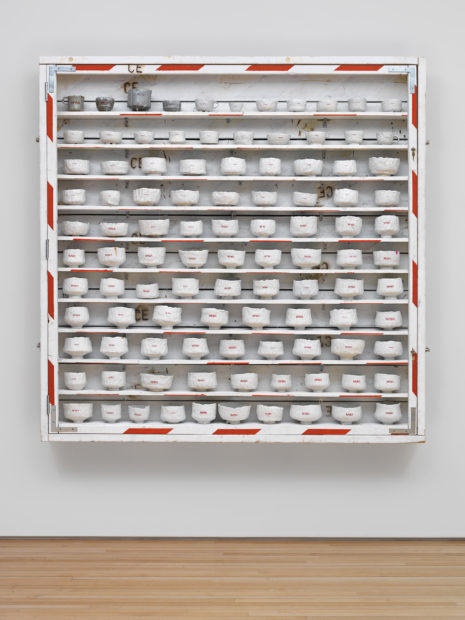 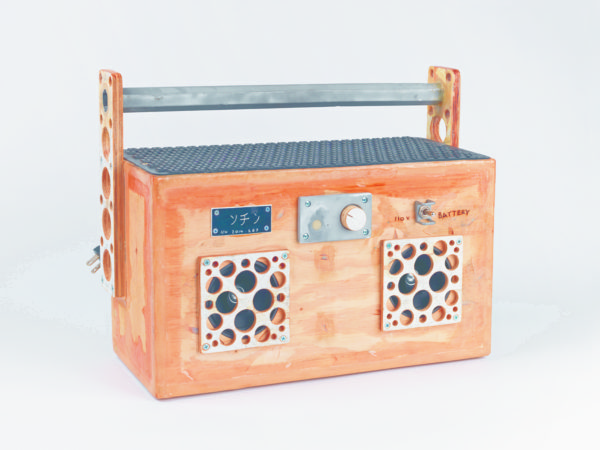 However unlikely it seems to connect NASA to the centuries-old rigor of a Japanese tea ceremony, it’s truly of a piece with Sachs’ ongoing concerns. A real tea ceremony is no simple thing. It shares with a space mission a staggering array of demands, expectations, and drilled-in training, with little margin for error. Both involve notions of politics and diplomacy, and of course both assign huge importance to the actual materials and designed objects that go into them. On Apollo 11, a button is never just a button. In a traditional tea ceremony, which can stretch on for hours, a tea cup is never just a tea cup. Sachs’ tea cups (of which there are many hundreds) are stubby, thumb-printed porcelain, and he made them himself and embedded each with a small NASA logo. (No one said being sentimental and having a sense of humor are mutually exclusive.) His tea room is a working tea room, but one conceived by a clever carpenter with a hard-on for Star Trek. It’s the very tea room my own brother would build given the time and tools. It’s relatable and recognizable — a culmination of decades of closely observed pop-culture — and also exotic and mysterious. 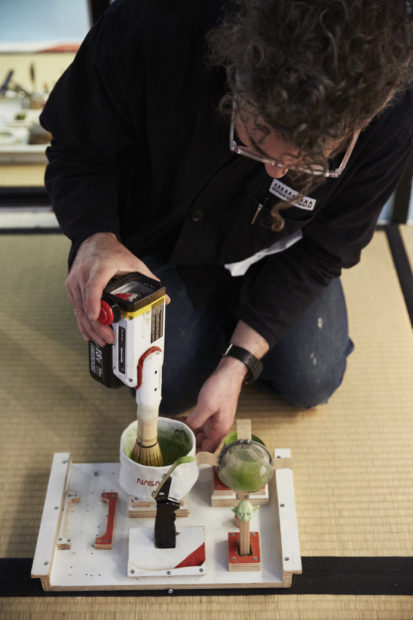 Sachs performed the tea ceremony with guests, in public, several times over last week. It’s a meditative and unhurried process, and I reckon this is a natural evolution of Sachs’ sensibility. He’s demanding that both he and his audience slow down. By asking viewers to share in his respect and regard of such long-held tradition, Sachs is moving past his faster, flashier art-star image into something more middle-aged and deliberate. He’s reconciling his past with his future. The geeked-out Trekkie is still in there, but now he’d like to apply all that head time spent in outer space with something more Earth-bound. Tea Ceremony features, among other things, stepping stones made of plywood, a koi pond populated with real fish, a fountain basin for washing one’s hands, a food grill, custom-made tabi socks, a bronze bonsai tree cast from toothbrushes and toilet paper rolls, and plenty of safety and security materials scavenged from (or looking as though they’ve been scavenged from) construction sites. As you walk through the Nasher, you’re suspending your disbelief in the same way you would in a theme park or haunted house, while still being constantly visually reminded that someone made that. This is Sachs’ calling card. 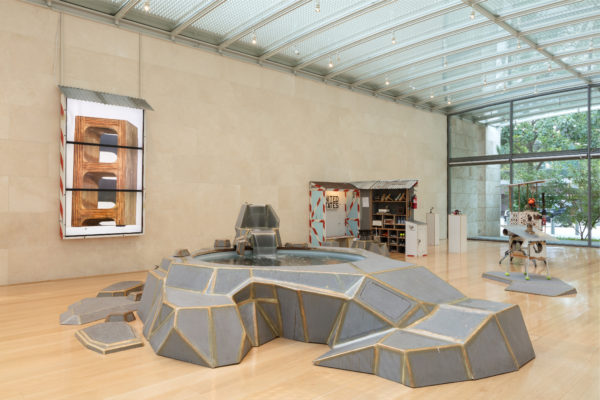 I won’t get into a lengthy discussion about cultural appropriation here, because my sense of that landmine is mainly one of college kids and dippier fashion designers spending five minutes trying to find a “theme” for their next outfit. Sachs’ reverence for the form — his research and carefulness in deciding which accoutrement or cultural reference of the tea ceremony to mark with his own hand — is so far past the carelessness with which a sorority girl decides to wear a headdress to a music festival that I won’t dignify it. If anything, Sachs is a genuine fanboy whose current obsession is Japan. His embrace of the tea ritual is more akin to the thousands of teenagers across the west who cannot get enough manga and anime, and sit down to draw their own versions of it day after day. Because he’s Tom Sachs, he can address his obsession in a museum. He’s hungry for what the tea ceremony is — what it does mean and what it can come to mean — and he’s on a deep dive. I wouldn’t call him a cultural anthropologist, or a buzzkill, but he takes the ritual of sharing some tea very seriously. He hopes you will, too.

Through January 7, 2018 at the Nasher Sculpture Center, Dallas. Installation photos by Kevin Todora.