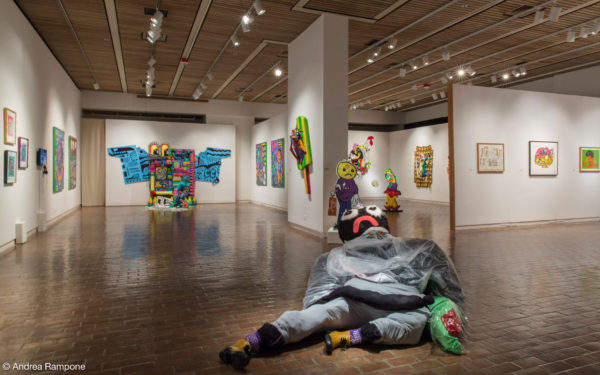 The artists in Daydreams and Other Monsters, an exhibition at UTSA curated by Alana Coates, turn their social critique back onto us to expose the demons lurking within our society.

The exhibition is anchored by a handful of works by Peter Saul, a contemporary godfather of making art that people are reluctant to hang on their walls. In his typical style of mutilated, caricatured figures, Saul’s pieces in the show tackle issues that deeply divide our culture: execution, sexual assault, racism, and abortion. Ethel Rosenberg in electric chair, an acrylic painting on paper from 1987, shows the 1953 electrocution of Ethel Rosenberg, a woman accused of committing espionage by way of giving the Soviet Union the U.S.’ nuclear weapon designs. Saul deliberately depicts Rosenberg moments after her death — her skin is burned, her face in rictus. She is ablaze (according to an eyewitness account, a “ghastly plume of smoke” rose from Rosenberg’s head). 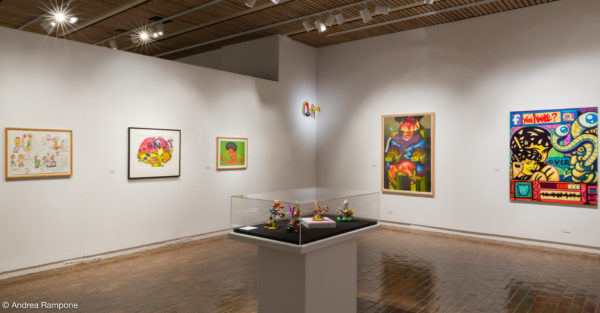 Part of Saul’s depiction, however, is incongruous: Rosenberg was a prisoner, but here she’s dressed in a lavish coat and pearls, and an oversize thumbtack pinned to the wooden chair shows Rosenberg’s name. Saul’s work doesn’t pull any punches — he wants you to understand what he’s saying. It’s a treat to see works by Saul in person, and it’s surprising that in Texas we see so few, since the artist taught at The University of Texas at Austin from 1981 to 2000. Perhaps they’re too blunt for our Texas culture of politeness.

Another artist included is San Antonio native John Hernandez. Many of Hernandez’s pieces have been shown recently in Texas; last year, Benito Huerta organized a survey of his works hosted by both the University Of Texas at Arlington and Houston’s Museum of African American Culture. Drawing on the graphic langue and bright colors of comic books and cartoons, Hernandez’s prints, sculptures, and assemblages come off like Lichtenstein on acid. His images are at times both adorable and ghoulish, and maximize their communication by leaving no detail unturned — the pieces are layered and overworked in the best possible way.

San Antonio artist Louie Chavez’s supersaturated paintings dominate a fair portion of the show. Drawing on the ubiquity of internet memes, the works’ imagery are collages of familiar subjects: Neil deGrasse Tyson, an unflattering image of Beyoncé, Beast Jesus, Pepe the Frog, and many more. Some of the pieces feel ungrounded; the subjects float on gridded or industrial-looking backgrounds and don’t pack the substantive commentary heat prevalent in the other artists’ work. It’s not always clear what Chavez is trying to say. The graphic quality of the works is spot-on, but they don’t jive as paintings in a gallery space — they would work better as large-scale murals. 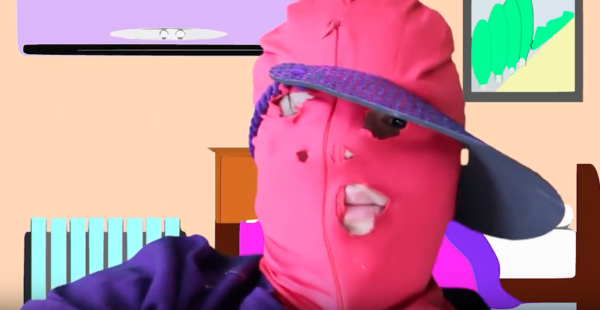 The youngest artist in the show, Megan Solis, is a recent graduate of UTSA and has been quite active recently — she had a residency and an exhibition at Hello Studio, has an upcoming small show at the McNay, and was involved in an online event I curated on Performance Art Houston’s Instagram account. Solis’ videos in Daydreams and Other Monsters share the same aesthetic as her past works — the main character is dressed in a morphsuit, creating an androgynous blank slate that Solis molds into an overly costumed personality. Unlike her earlier works, the videos in this show lack gender and relationship-based conflict and violence, and instead foster a more profound sense of loneliness and self-reflection. They’re lengthly and meditative, and have prolonged sequences where the artist is laying around performing banal activities or staring off into space.

What comes through in these moments is how the videos mirror a former student’s post-academic life. Even though Solis distances herself from her subject matter through dehumanizing costumes, I feel that these videos may be her most personal works yet.

The title of the exhibition, Daydreams and Other Monsters, can be applied to each artist’s output in a different way. Saul makes it clear that we are the true monsters; Hernandez shows us the cast of slippery characters who preoccupy his daydreams; Chavez beats us over the head with the multitude of images that float in our mind thanks to the internet; and Solis stitches together and presents the profound loneliness permeating the millennial generation. Overall, the show is dense. Since each artist’s work demands so much unpacking on the part of the viewer, it feels like there are too many pieces to take in, but at the same time, overstimulation is Hernandez’s and Chavez’s strength, so it’s good Saul and Solis are there to slow us down.

Daydreams and Other Monsters is open at UTSA by appointment. To view the show, contact Laura Crist at [email protected] or 210-458-4391.

Hello Studio in San Antonio is Looking for...