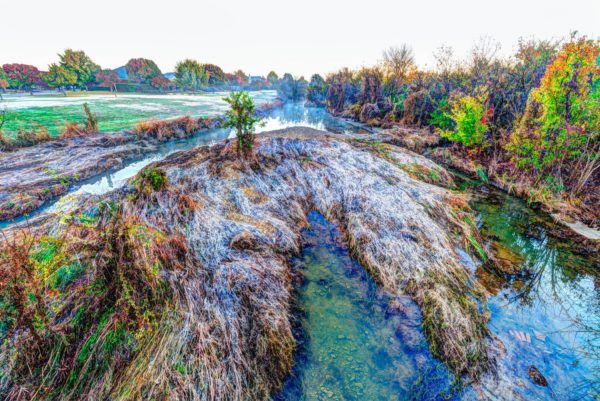 Photographers Luther Smith and Jason Lee are showing in Fort Worth at William Campbell Contemporary Art and Artspace111, respectively. Smith is local and Lee is not, though both focus on the Texas landscape. Jason Lee embarked on several road trips around the state, logging 5,000 miles while visiting small towns and at least  50 locations to create the body of work shown in A Plain View. The show is a preview of the book scheduled for release by RF Book Co. and Film Photographic at the end of the year.

Almost all of the images in Luther Smith’s show Extraordinary/Ordinary were taken in Fort Worth, and it includes work dating back to 2014 as well as recent work. Often Smith is on foot, looking for interesting landscapes as he walks along creeks that are contained within neighborhoods—the houses are visible in the backgrounds of a few images. His preferred subject matter isn’t the water, really, but rather the vegetated landscape, and woodlands and adjacent waterways. In contrast, Lee is looking at the manmade constructed environments of small towns set within the context of fields and backyards, paved parking lots and roads. The buildings in these places look familiar, ordinary, and worn—it’s part of our vernacular.

The equipment and technical preferences of the two artists differ. Lee uses expired film; it typically produces muted, desaturated colors, and has the color shifts that occur with older films. He uses an Imacon scanner to scan the sheets of processed film and prints the pigment inkjet prints on Red River cotton rag. Lee feels that the character of the film is retained this way. “There’s a warmth here, and a necessary sense of distance… it’s a color palette that I appreciate.” Given Lee’s primary career as an actor and producer, it’s not surprising that when he talks about his work he makes analogies to film production.

Smith has fully embraced digital technology, and he uses imaging software to combine several exposures of the landscape to create a new image with more intensified color than we perceive in nature. “My response to color and light and the changes to the environment over time fuels my photography. I have an emotional attachment to plants, light, and nature,” says Smith. 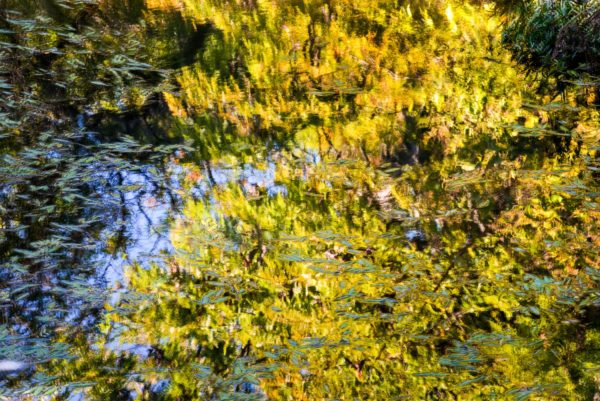 Of all the images in Smith’s show, Reflections, Fort Worth, Texas, October 22, 2013, is the most painterly and impressionistic in its manipulation of color. Reflected distortions of yellow vegetation in blue water create feathery patterns punctuated by pale green floating leaves. The image has a high vantage point so that the viewer feels immersed in it. 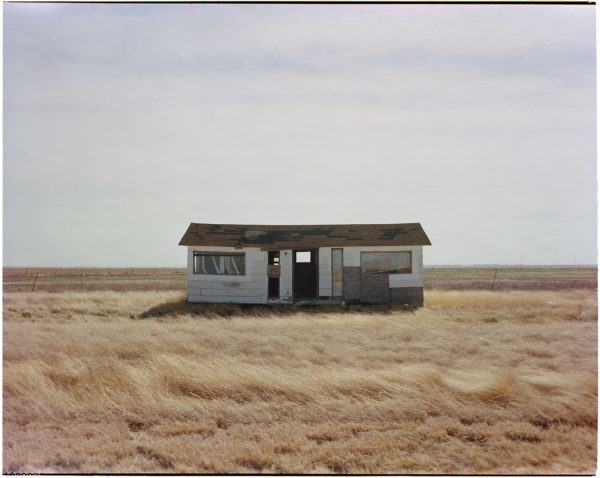 The central image of Jason Lee’s exhibition captures an isolated and iconic viewpoint, one that references William Christenberry’s appreciation for decaying buildings. The flat Texas topography and the composition’s simplicity evoke the “Plain View” of the title. In Highway 136 North of Amarillo, the dry grass in the foreground is a textural detail that draws us toward the building, centered so that we can actually see through the back wall to the limitless sky beyond. 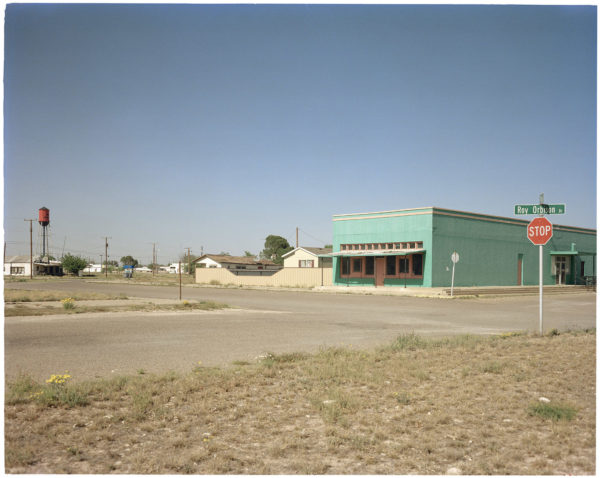 In Wink, Texas, Lee uses a stop sign and a red water tower to frame a lonely stretch of Roy Orbison Drive, with a green building for emphasis. “Films like Wim Wenders’ Paris, Texas strike a chord for me. I suppose in some way these are like film stills from something that may feel like this kind of cinema,” Lee writes. 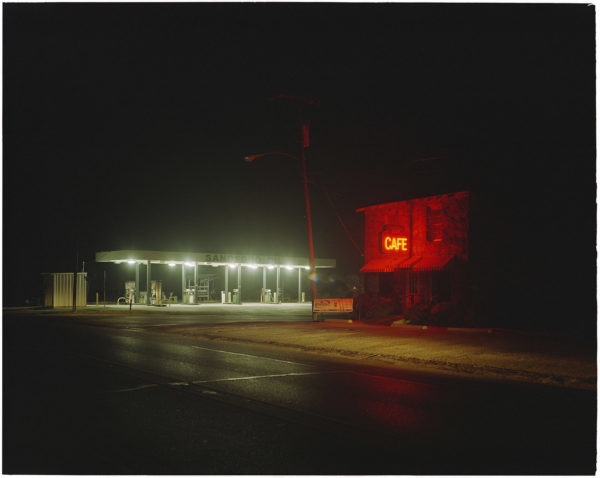 Some of the most arresting images in the show are Lee’s night scenes, as found in Decatur, Texas, where the red glow generated by the yellow neon sign of the Whistle Stop Café is paired with the glaring white light illuminating the canopy of a Sanford Oil gas station.

Neither of the photographers directly include people, except for one image of a man sitting in front of a house in an image in Lee’s show. Instead, they focus our attention on either the built environments that express the aura of unseen inhabitants, or the overlooked areas where nature still thrives, but people turn their backs on it.