by Colette Copeland May 11, 2017
FacebookTwitterEmail 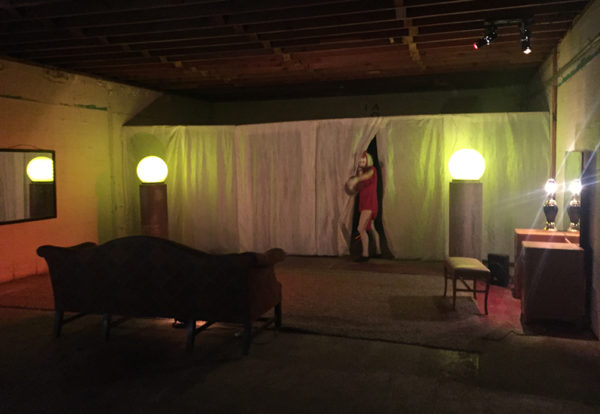 As a Dead White Zombies virgin, I wasn’t sure what to expect at the performance. Would I be humiliated and forced to interact with the performers? I wondered if I would be able to fully immerse myself in the experience, since I was also photographing the event. Two friends accompanied me—both DWZ veterans, whose presence emboldened me.

At the first station, I was asked to choose a question that would direct my focus for the evening. I’m not going to reveal my chosen question, or much about the particulars of the evening, except to report that the performance left an indelible impression on me. At moments during the performance, I felt confused, manipulated, irritated, defiant, contemplative, peaceful, and by the end—completely exhausted both physically and mentally. My one regret is that I didn’t go twice, first to experience and second to document.

What follows is my conversation with Thomas Riccio, co-founder of Dead White Zombies. 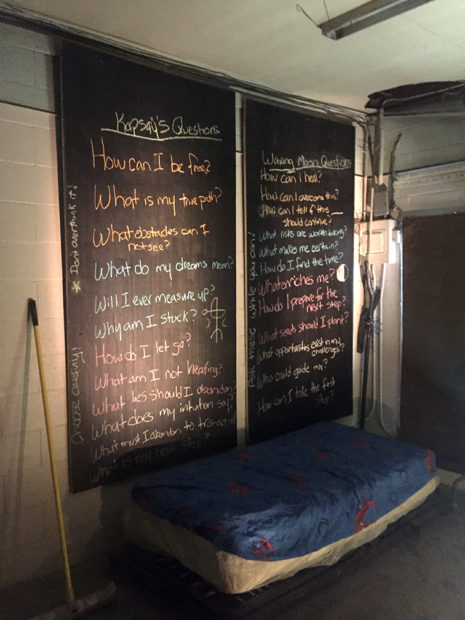 Colette Copeland: First, I was reading Dr. Mark Dillof’s article The Deeper Meaning of Zombies and he posits that the most recent fascination with zombies stems from collective anxiety and fear over losing one’s autonomy. This is not a new idea. However, he states that because our existence (our development?) of consciousness has been denied, the boundary between human and non-human dissolves. How has the metaphor of the zombie shifted in meaning for your group over the past five years? And also: Has the current election changed the Dead White Zombies’ perspectives and altered the group’s manifesto?

Thomas Riccio: I’m a child of the 1950s, and became a big fan of classic horror and sci-fi in a time when American Dream propaganda was at is its apex. I was manufactured during the Ur-moment of the Amerikkkan Zombie. Every Saturday I was at the Madison Theatre where, for twenty-five cents, you could scream and cringe, go home and have nightmares. In between features, they ran Three Stooges shorts—horror, comedy, absurdity fused in my consciousness. I was born and raised in a working-class ethnic neighborhood of Cleveland amidst chemical and stamping plants, foundries, and factories. Life was an immersive walk through horror, sci-fi, ethnic comedy. That’s why I like working with the post-industrial aesthetic of West Dallas. There is a terrible, poetic beauty offered up by our chosen environments.

Cleveland, the mistake on the lake, the city where the Cuyahoga River caught on fire (twice), the rust belt, a corrupt devolution wasteland. We lived up the street from a beach. Lake Erie, a lake declared dead, putrid with industrial effluents mixed with organic death, bloated dead carp gasping, speckled with pustules, slick and colorful with toxin-provoked hues. For fun, we would sit on top of a large pipe waiting for the rumbling majestic spew of raw sewage overflow. These feelings and images are like maggots wormed into my genetics. They lay underneath, a dark passenger, the inspiration for the Dead White Zombies.

Cleveland was a prophecy premonition of the world to come. White, European-based culture, with all of its incumbent values, is self-destructive human-centric, self-aggrandizing, consumption-driven perpetrator of ongoing atrocities. The world is now its suburb. You can’t have unlimited growth on a finite planet. White culture is a death machine. Dead, but like a zombie, somehow still walking around, still causing all sorts of destruction, cannibalizing what little remains until there is nothing left. We are delusional, placated, pacified, willfully ignorant, numbed by the immensity of our predicament.

The metaphor of the Dead White Zombies still guides us, and like a Zombie, we have no one performance space. I get a hair-brained idea, a twitch, a feeling, a flash of an image and then things are off and running. We have a little Zombie community of like-minded crazies; something like a sci-fi or Zombie collective brain is put into motion. I just spark the activity with some words and feelings and set them loose, we talk, we explore, we get confused, and then things happen, performances magically appear. I love working with these people, all of them. Once they are off and running, I have no idea what is going to evolve. All I insist on is for everyone to be relaxed, themselves, creative, and authentic. I tell them that what we are offering is a gift to our community. A gift doesn’t mean anything unless is it offered with a generosity of spirit. Be remembered for how much you gave, not how much you kept. 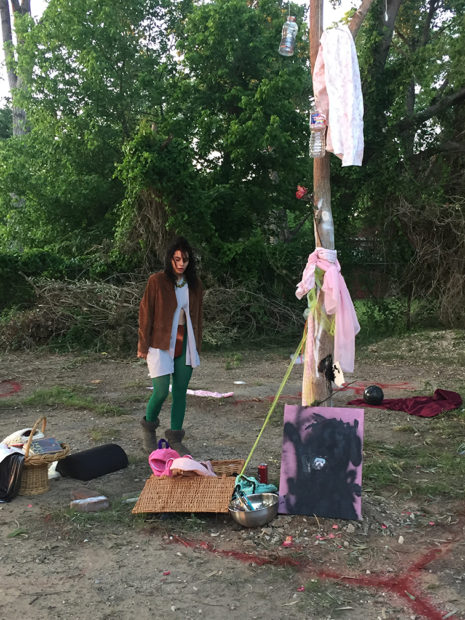 CC: Like so many other alternative arts organizations, the DWZ have been targeted by the fire marshal’s office in Dallas. Is it because DWZ plans to take over the city of Dallas? Rumor has it that there is a new, open sourced, easy-to-install microchip available that will reconfigure those who suffer from megalomania, and that DWZ has the software. Can we confirm or deny these rumors? Why are the all-powerful threatened by the marginalized?

TR: We are in an era of increasing, nefarious, neurotic control—welcome to the new, bright and easy totalitarianism. It feels good; it is smiling, all about you, it is for your own good. It will take all the inconsistencies out of life and create a strip-mall of the mind and imagination; all the better to facilitate obedience, consumption, and banality. Surveillance, terrorism, economic and political divides, generalized anxiety, ecological collapse, mass migrations, and Trump the clown king, are part of an escalating call and response. The concomitant rise of digital technology and hyper-consumerism means our world can now scrutinize and squeeze every last dime out of everything. We have all been scrutinized, quantified, qualified, and monetized. There are more and more people, fewer and fewer resources, which means everything, every detail, must be ordered, policed, and taxed.

It also means those who can, and their lackeys, are in the process of greedily gathering and controlling as much as possible. It is all about data, algorithms, and how the human body—its behaviors, emotions, and psychology—can be anticipated and controlled. We are all profit centers. We no longer identify and see ourselves in relationship to nature (with which we have less and less contact and exchange) but rather in relationship with technology and data. I text, therefore I am. We all have a real or metaphoric microchip in us. Those who resist are a threat to the process of ordering. When you order the externals, you are engaged in the process of ordering the internal. Ask any dog. The fire is not going to happen in any particular metal and concrete building; rather it is happening in our house of creativity. The flames are dancing around the rooms of possibility and imagination. Those in control seek to control both the real and possible; all we can do is to continue to adapt and subvert. Those on the margins are cosmic nomads—hunter-gatherers threatened with either acculturation or elimination. 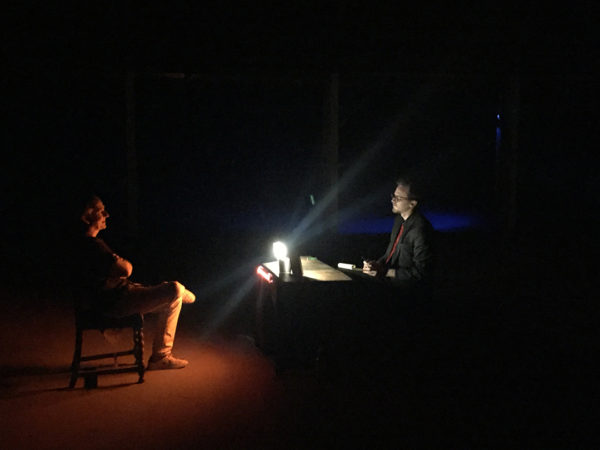 CC: In DWZ’s current production Holy Bone, the performance moves to a number of undisclosed locations throughout the evening. Besides the practical aspect of keeping one step ahead of the fire marshal officers, this also allows performers to interact with an unsuspecting public, as well as forces the paid viewers to engage with the work in novel ways. How has this change shifted the conceptual themes of the performance?

TR: DWZ has always been about creating an indigenous performance. Meaning, the process is the recognition of givens, spaces, performers, budget, and the tapping into and momentarily capturing the currents swirling in and around. This lends our work an immediacy, a presence. It is existential, like we all are, here for a moment then gone. We aspire to make moments a bit sharper, more resonant. We want to move beyond the surface, the cacophony of distracting, de-centering contemporary life noise. We aspire to surprise and at times disorientate—what we want to provoke is a moment of genuine feeling. The expression of our work may change, but that is a constant. 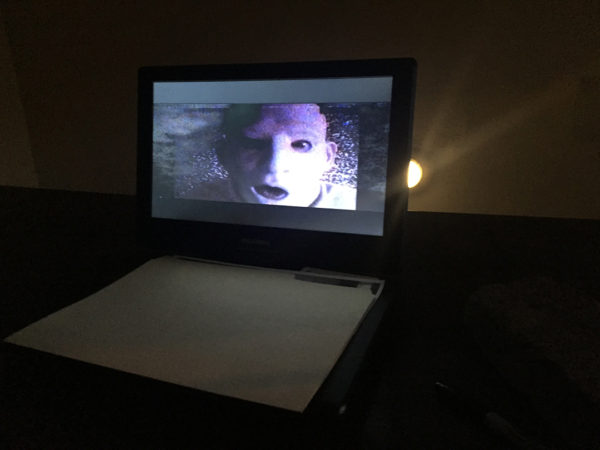 CC: What is a Holy Bone and how can I get one?

TR: You already have a Holy Bone. The Holy Bone is the bone behind a woman’s cervix, and it is a symbol, a metaphor, and an idea. It is the densest, the last part of the skeleton that will disintegrate back into the earth. We all came from the Holy Bone, and that’s where we are going. We have and will again mingle on the other side. Let’s mingle with a presence of mind on this side. 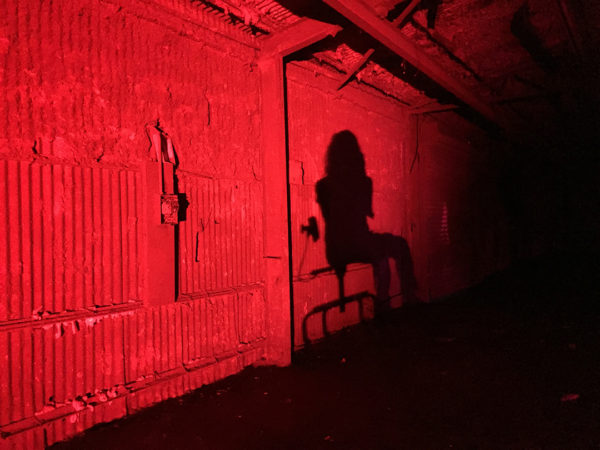 CC: What profound paradoxical truths can we learn from the DWZ?

Existence is a shifting, cross-current flow of multiple truths, there is no paradox; everything is as it is and as it should be. Everything is perfect. Everything: every sound, gesture, glance, emotion, and event, be it human, animal, elemental, ancestral, or spiritual is in dialogue. We carry and walk through a lush and textured narrative every day. We are only part of a larger narrative. A part of a whole. Listen, see, feel, and simply be present is all you need to do. We know, but we forget. We need to remind ourselves. 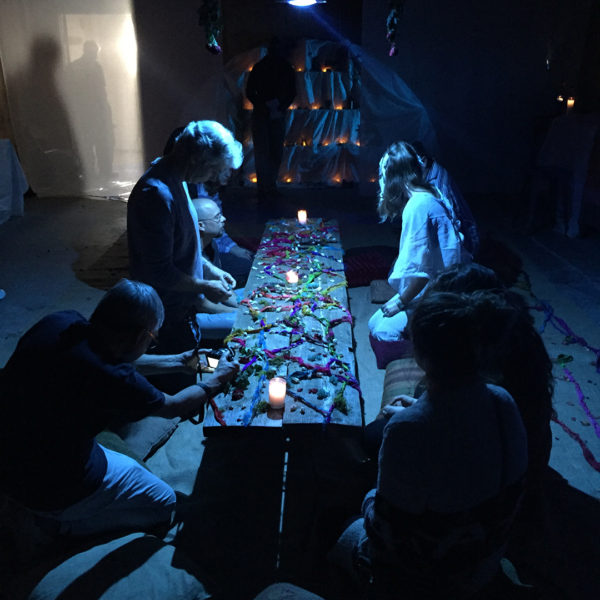