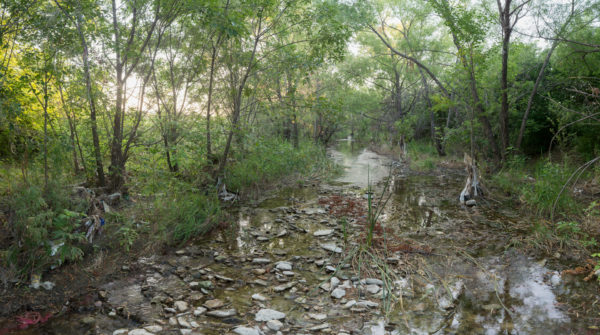 The title No Unsacred Spaces references a statement by writer, poet and environmentalist Wendell Berry: “There are no unsacred places; there are only sacred places and desecrated places.” In his photography exhibition on view through this Friday in Dallas at the Oak Cliff Cultural Center, Peter Hiatt seems to have discovered something rare: an unexplored landscape photography subgenre. He found that the manmade ditches surrounding suburban shopping centers are largely hidden vestigial spaces created in service to the commercial development, mostly for management of stormwater that runs off of large parking lots. Zoning laws require screening, so trees are planted around the perimeter of the lots, effectively cutting off any view into these forgotten spaces.

The narrative introduction to his show states:

“Trees are grown dense and high, creating the implication that they are not to be breached; that this is the edge of the space. The microcosmic world held inside these ditches is shockingly, defiantly natural, even though it has been given shape artificially. The photographs that I make show a world that is as close as our backyard, but we shut it out, because it displeases us. We must remember that we live apart from nature because we choose to. It frightened us, so we covered it in concrete. I want us to confront what we have chosen to destroy.” 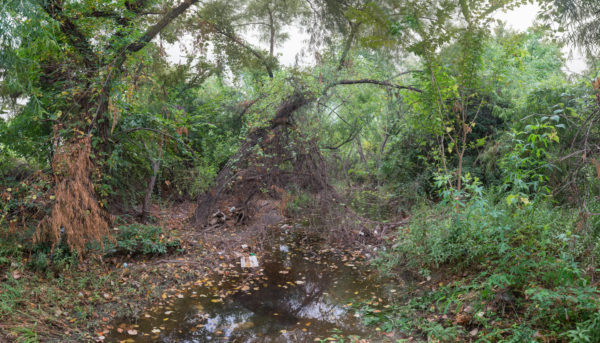 Hiatt effectively increases the visceral impact of these tangled spaces by creating for this installation three huge seven and a half-by-fourteen foot enlargements of his photographs; they’re big enough to make us feel that we can step directly into the green spaces. To create the enlargements, he uses a self-adhesive fabric called Phototex, usually used for advertising, and prints them himself on a large format printer. The images are printed out in long vertical strips, which are carefully aligned on the wall like wallpaper, and the seams are virtually invisible.

Hiatt states, “People dug these ditches and planted the bordering trees, but what has happened inside of them, away from human eyes, is random, messy, ugly nature.” We can also readily see that the spaces have been desecrated with the cast-off detritus of the adjacent retail environments. Even though the natural spaces are wild with random vegetation, it is the accumulated trash that appears out of place, and makes these spaces especially disconcerting. 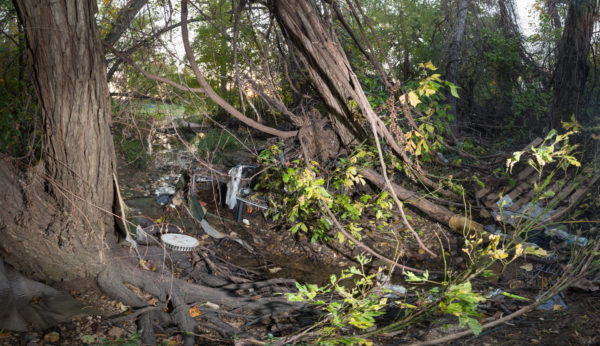 Dark woods predominate in this smaller print, Behind Michaels II. The gloom is punctuated by splashes of green leaves. A wooden pallet and metal grills are among other trash. 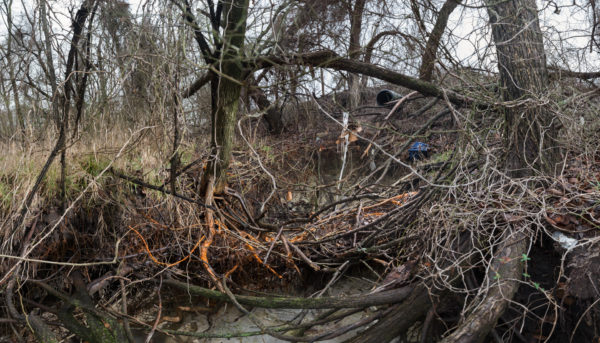 In Behind Sears, a drainage pipe projects from a steep incline. Half dead grass and scrappy saplings are visible through interlacing briar vines. A blue plastic milk container is half buried in the ground. At the bottom of the print, exposed tree roots extend across the runoff channel as murky, scummy water lies below. On the left, bright orange roots snake down and across the picture plane. Nature is aggressively in control. 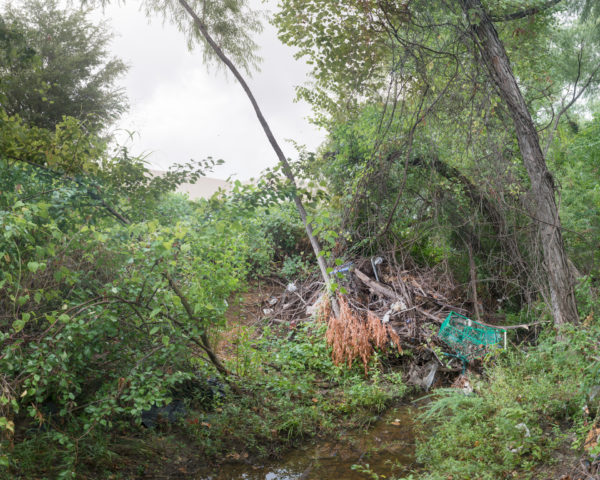 In this small print, Behind Pier I Imports IV, a bright green shopping cart veers crazily into the right side of the frame, and to the left, a gray metal cart is upturned and nearly invisible. The carts act as a snag, and have trapped plants, sticks, plastic, and other debris. 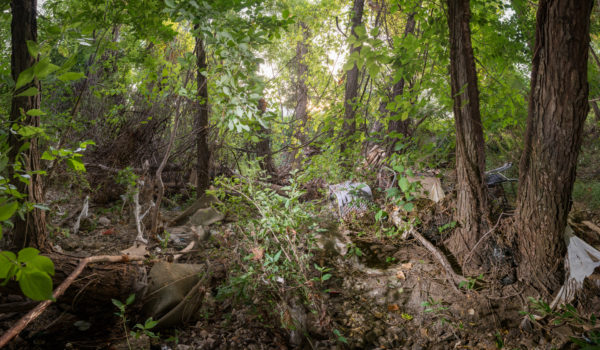 In Behind Pier I Imports, more overturned shopping carts lie half buried in the ground, and wadded up carpet padding almost blends in with the ground. Sunlight filters into this backlit scene.

While this tranquil scene is infested with trash, it also underscores that the undisturbed vegetal growth creates its own purposeful ecosystem, providing a protected area for animals squeezed out of the developed areas of suburbia, and occasionally shelter for shunned humans, too. Hiatt said he generally retreats whenever he sees signs of human encampments in these areas.

Speaking of Berry’s sacred or desecrated spaces, who is to say which kind of space this is? Some humans and animals would know. Maybe it is the developed areas that have been desecrated, and these recaptured remnants of abundant and flourishing nature contain more than a just a memory of the sacred.

The exhibition at the Oak Cliff Cultural Center continues through Friday, April 7, but there will be other opportunities to see this series elsewhere in north Texas. Hiatt will exhibit the smaller prints and give a talk on the evening of April 11, at Better Block, a Dallas organization which encourages progressive urban design through pop-up events. After that, large and small prints will be shown at the Fort Worth Community Arts Center, from May 5 to June 30, with the opening on May 5th.