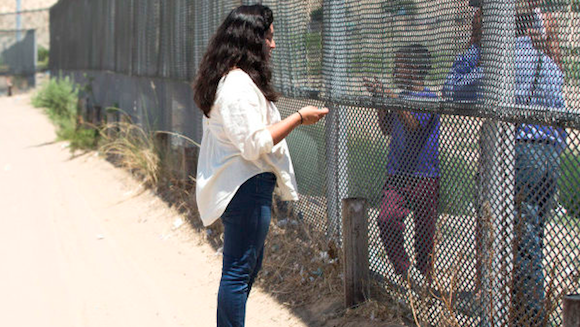 Image via The Nickelodeon

Filmmaker Angie Reza Tures wanted to host a private screening for friends and family upon the completion of her short film, Memory Box. She also invited some of her favorite El Paso filmmakers and asked them to be a part of the screening. What transpired became an exhibition celebrating female filmmakers from the El Paso-Juarez U.S.-Mexico border region called the Femme Frontera Filmmaker Showcase. It has since screened as part of the 2016 the UTEP International Cultural Festival, the 2017 Women’s March-Boundless Across Borders festival and played to a packed house on January 26th, 2017 at the Los Angeles Echo Park Film Center.

The collective continues to tour the Showcase and are now planning the 2nd Annual Femme Frontera Filmmaker Showcase to be held on September 23rd, 2017 in El Paso. (Filmmakers: Check out guidelines and deadlines here.)

A review from the Indie Grits Film Festival:

Resisting stereotypical, hyper masculine depictions of the Latina experience that so often reduce characters of color to the status of flimsy cardboard cutouts, the directors of Femme Frontera prioritize feeling and style ahead of plot, cultivating tactile emotional realities onscreen that address–in part–the illogic behind man-made walls.

“Before the election,” El Paso native filmmaker Iliana Sosa told Variety, “I used to wonder why people weren’t more open to talking about immigration. Post-election, I feel like people are more open to discussing it.”