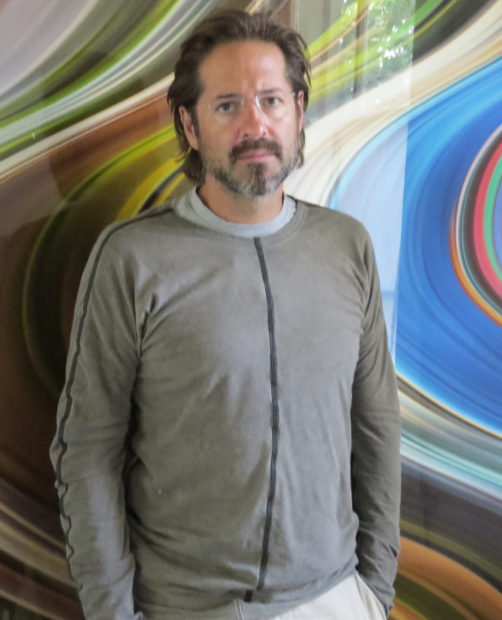 Mexico City native Rodolfo Choperena established himself as an active supporter of the San Antonio art scene long before it ever occurred to him to become an artist himself. After graduating from UTSA with a BS in biology in 1988, Choperena had an opportunity to work in finance, so he became a broker, and began collecting art by area artists. By the 1990s, he was regularly attending art events and was invited to join the board of Blue Star. Through his close friendship with the late artist Chuck Ramirez and his frequent travels to see art in other cities, Choperena developed a passion for contemporary art.

But it wasn’t until 2008, while preparing to accompany friends on a trip to Africa, that Choperena began making his own work, opting for photography as his preferred medium. Not interested in going on safari hunts, he decided that the only kind of “shooting” he would do would be done with his new Nikon D-300 digital camera. Over the course of a two-month stay in Africa, he aimed his lens at moving animals, mostly birds in flight, and studied relationships between aperture and speed. The following year, while on a trip to Croatia, he experimented further.

Choperena traveled to Croatia specifically to see an installation by Olafur Eliasson. Titled Your Black Horizon, the installation was created in 2005 for the  Venice Biennale in collaboration with architect David Adjaye, who designed the pavilion. Now housed permanently at Thyssen-Bornemisza Art Contemporary on the Croatian island of Lopud, the work consists of a windowless black room where a thin horizontal line of light, visible through a narrow slit at eye level, runs continuously along all four walls. In creating it, Eliasson altered the duration of a 24-hour light cycle by condensing it into repeating 3-5 minute segments that change colors while moving through the entire spectrum. 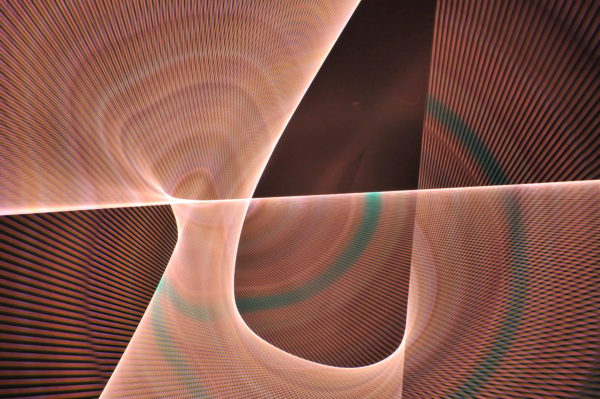 Playing with time himself, Choperena used a range of exposures of up to ten seconds to photograph sections of Eliasson’s light line. In resulting photographic abstractions such as Where’s Johnson?, reflections of light appear in the form of radiant cavernous spaces defined by geometric shapes intersecting with swirling and crosshatched lines. 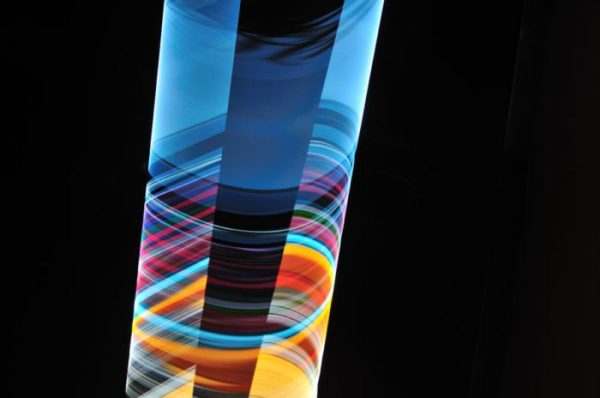 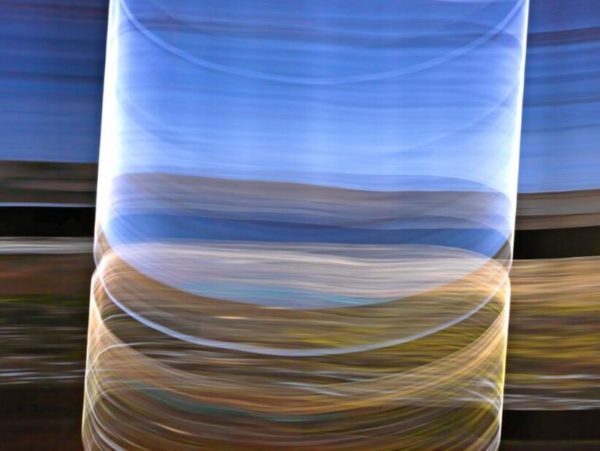 While vacationing In the summer of 2009 in the coastal town of Careyes, Mexico, Choperena tried an alternative approach to holding his camera in a fixed position. As he aimed it towards the Pacific Ocean he discovered that, by quickly moving the camera in quick circular rotations, he could produce columnar configurations like those in Columna and Columna 555.  In the former, he added color to the composition by setting up a beach chair draped with a bathing suit and t-shirt in the foreground. These color effects, which correspond to the placement of objects in space, can be seen in the lower section of the column. In this process of experimentation, Choperena also discovered that when shooting at faster speeds, details in the background disappear to leave a solid field of black. In Columna 555, where a slower setting was used, beach and ocean are distinctly visible through the transparency of a cylindrical light beam that suggests some kind of extraterrestrial presence. 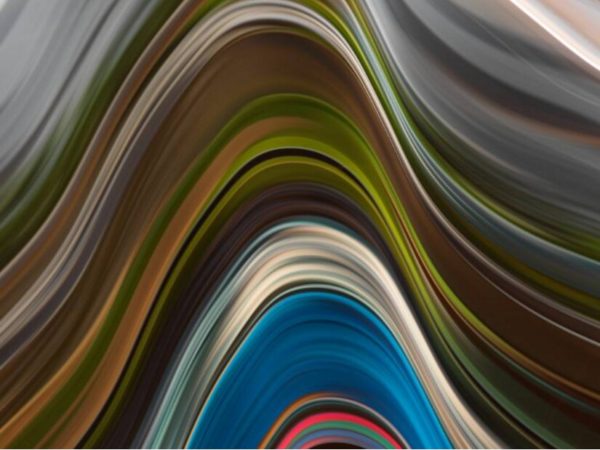 Attracted to the rhythms of linear configurations produced by moving the camera as if scanning physical space, Choperena next zoomed in closer to create a series of more formal abstractions. C-Wave in Green, for example, is a dynamic composition of swirling lines and colors, but it’s actually a photographic abstraction of a composed tableau of the chair with clothing set before a garden and the ocean. Capturing the essence of the subject, the composition simulates the rippling effects of ocean waves while also relating to the artist’s heritage—it brings to mind the colorful striped patterning of a Mexican serape. 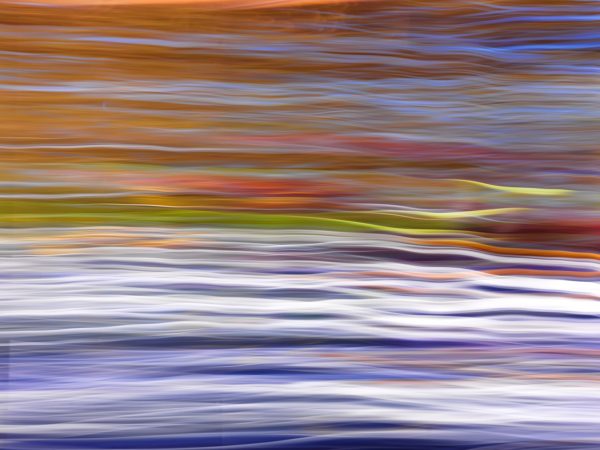 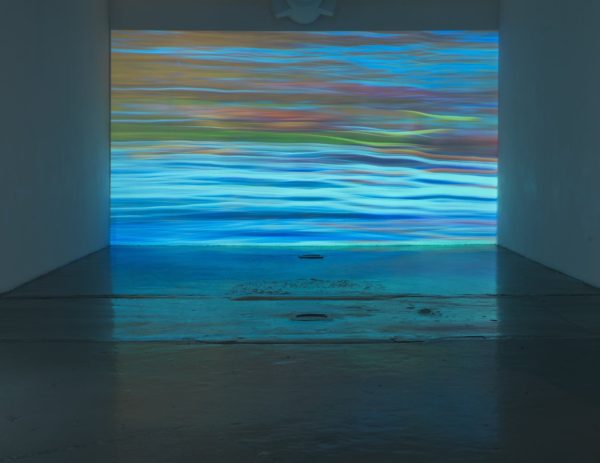 Shifting from ocean to land in 2011, Choperena became intrigued by dark purple shadows that appeared on the snow-covered terrain of Santa Fe, New Mexico on a cold but clear sunny day. He chose to follow the expansive horizontality of the landscape, and thus photographed the setting by moving the camera laterally. To give texture to the composition of Chacras in the Snow, Choperena walked on the snow before photographing it. To add the color, he set up a number of objects that he had at hand, including a green shopping bag, orange and pink Buddha heads, and a yellow t-shirt. Invited the same year to show his work at Blue Star, he turned Chacras in the Snow into a video animation. Influenced by Eliasson’s Your Black Horizon, Choperena’s Chacras in 60 was created using a video editing program to alter the colors of the still image such that they move through the entire color spectrum in 60 second cycles that repeat in a continuous loop. 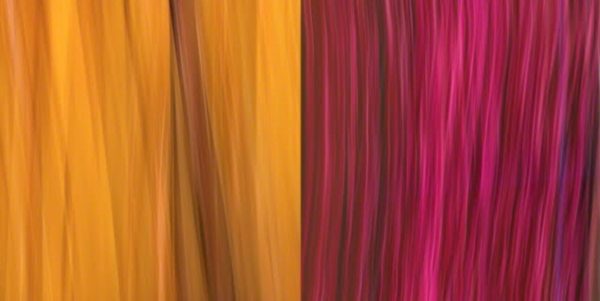 For works created in the studio, Choperena often uses his methodology to photograph traditional still-life subjects, including clothing, flowers, utilitarian objects, and collectibles. At first glance, the panels that make up his diptych compositions resemble close-up views of the folds of a curtain, as well as minimalist color squares infused with light, texture, and movement. In reality, they are abstractions that derive from arrangements of objects or materials that are usually referred to in their titles. The left section of Turmeric y Bougainvillea, for example, was made by panning the camera over a white shirt that the artist saturated with turmeric powder and arranged on the floor. The right section was produced using the same process to photograph a pile of bougainvillea petals spread over a black tablecloth, which contributed the dark shadows. 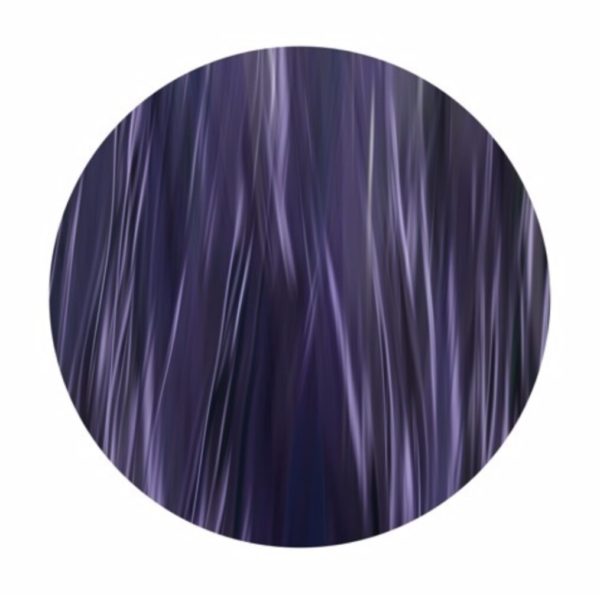 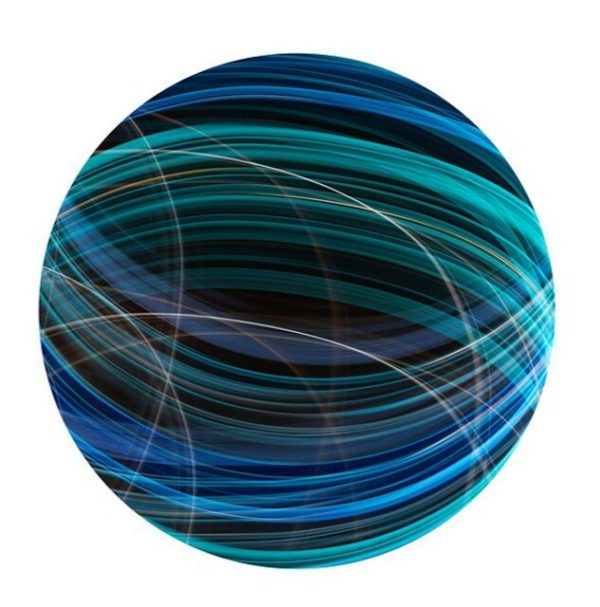 Choperena’s relationship to minimalism is evident in his tendency to work with repeating geometric modules, either within a single work or in series, as well as in his frequent use of a monochromatic palette. While celebrating the lush sensuousness of pure color accented with patterns of light, his circular compositions are especially rich with interpretive possibilities. In Jacaranda (the image source is flower petals on a black tablecloth), the suggested curtain folds appear to be opening at the bottom such that the work’s overall shape could be viewed as a portal onto a deep mysterious space. By contrast, the curving lines in Marble (the image source is blue sweaters), seem to rotate and create volume, hence the image might easily be mistaken for an enlarged photo of a glass marble from San Antonio’s popular Esferas Perdidas project, as Choperena’s title suggests. 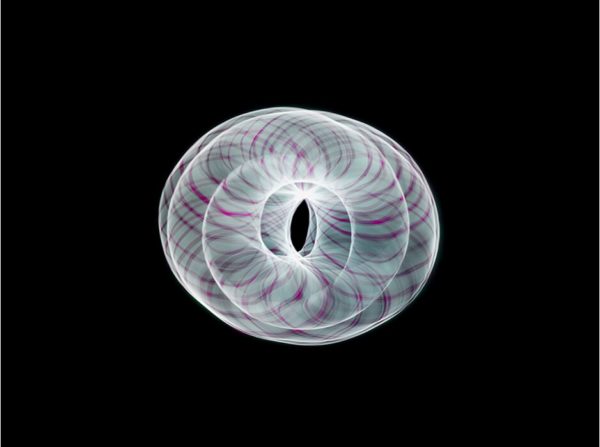 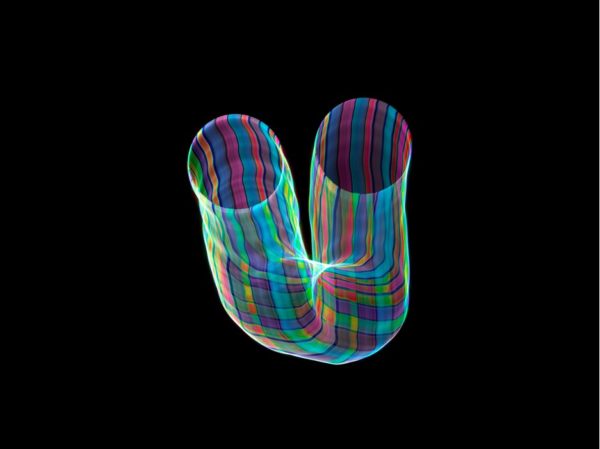 Although Choperena continues to work in this distinctive format, he’s currently exhibiting an exquisite body of work at San Antonio’s Dock Space Gallery that represents an exciting stylistic variation for the artist. The results are breathtaking. Made by photographing an everyday light bulb using his characteristic method, each image in the artist’s Interventions of Light series resembles a three-dimensional glass object that is radiantly illuminated from within. Seemingly defiant of gravity, these crystalline objects appear to float freely and effortlessly in the middle of solid black fields. In most examples, the shimmer of each image is intensified by gallery lights interacting with the print’s glazed mica surface, thereby causing it to sparkle in a manner that is at once visually seductive and joyful.

Selections from ‘Interventions of Light’ are on view Dock Space Gallery through February 6.