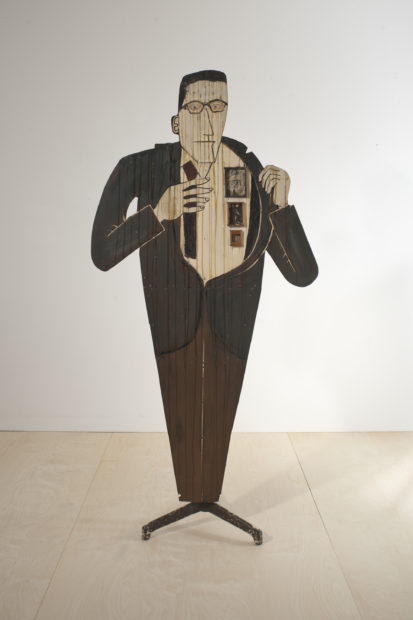 Holy Barbarians: Beat Culture on the West Coast, currently at the Menil in Houston and curated by Clare Elliott, features California-based Beat artists such as John Altoon, Robert Alexander, Wallace Berman, Bruce Conner, Jay DeFeo, George Herms, and Edward Kienholz. Beat-Generation writers like Allen Ginsberg and William S. Burroughs—better known than their visual-art counterparts—show up in the exhibition on the pages of Berman’s Semina journal. But the visual artists were something the establishment really didn’t know what to do with. In their time, many of these artists’ shows were censored or shut down; Berman’s 1957 Ferus Gallery show in Los Angeles was shut down by the police and he was arrested on obscenity charges. Kienholz’s Back Seat Dodge ’38 (1964), when shown at his 1966 LACMA exhibition, was publicly contested and then censored. But in recent years, the Beat artists have become a more visible part of the historical record: this past fall, Bruce Conner was the subject of a major monographic exhibition at the Museum of Modern Art. 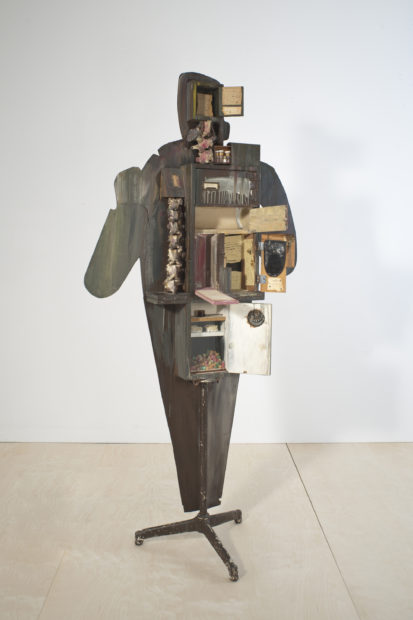 Holy Barbarians includes work from the Menil Collection and works on loan. When you enter the gallery, the Menil’s Walter Hopps Hopps Hopps  (1959), by Edward Kienholz, greets you, so that Hopps—the founding director of the Menil Collection—grounds the exhibition. Kienholz, Hopps’ friend and co-gallerist of Ferus Gallery (for a time), presents Hopps here with affectionate details (such as Hopps’ habit of always being late) and with a bit of cynicism (hidden compartments contain some of the tools of the art market, and on his chest are miniatures of paintings, such as a de Kooning, which seem to refer to the back-alley selling of commercial goods like watches or jewelry—perhaps suggesting the two markets aren’t that dissimilar). Hopps would go on to become part of the art establishment, and here he appears in the fragments that Kienholz uses to create a sense of him. 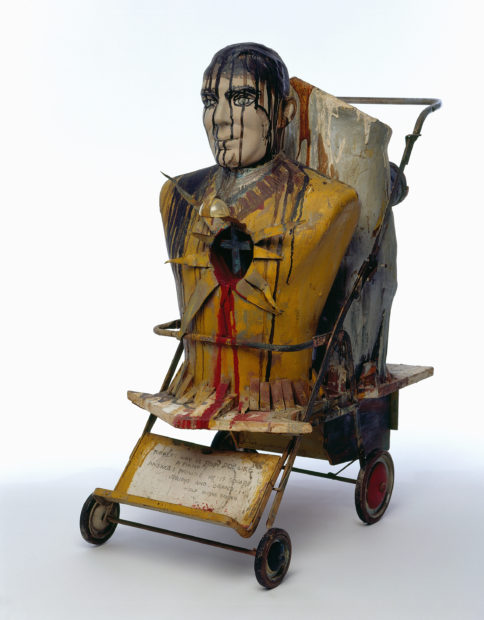 In another Kienholz work, John Doe (1959), the absurdity of the expectations of fifties masculinity and conformity are made visible. The assemblage presents a somewhat tender mockery of fifties conformity: a male mannequin, split in two and the halves set next to one another, is placed on a stroller. His vacant, smiling face contrasts with the implosion occurring to his body; he’s impaled from the back, with a hole through the backside right through the mannequin’s “heart,” which is just a cavity. It’s a gaping hole with sunshine-like rays and blood-red paint around it, and one of the rays extends out to the viewer, as if inviting us to somehow climb inside. Whatever interiority is left in the man seems to be dissolving in the wake of expectations. Kienholz writes on the bottom of the work:

Answer: Because he is square upright and grand.

Kienholz has, in pun, replaced a ‘soothsayer,’ or one who foretells our futures, with a “soothe saying” which perhaps soothes us into conformity, into some suggestion of a tranquil period in America common to the rhetoric of post-war culture (usually by those less familiar with the period). Holy Barbarians reminds anyone foolish enough to think the fifties were a time of American idyllic greatness that there were many American people and a great many American experiences left out. The exhibition and its artists are fierce reminders of the multitudes who were seen, during their time, as “fringe” or part of a counterculture and thus overlooked by establishment America.

Bruce Conner’s Untitled (Pearl Necklace), from 1958, offers another view on the social and psychological fragmentation caused by strict conformity. Almost a black monochrome, the work suggests a fifties housewife in a grid of brocade, pearls, and buttons. Its palette makes the work’s images difficult to discern: there’s the possibility of a female figure in ecstasy on the right and a suggestion of a falling male figure on the left. Conner gives us the debris—the casualties—of decorum in his materiality. 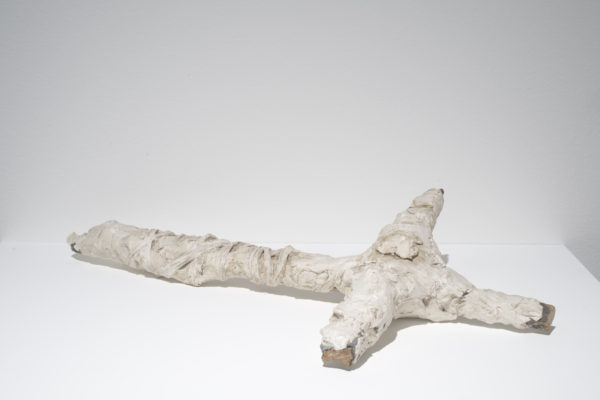 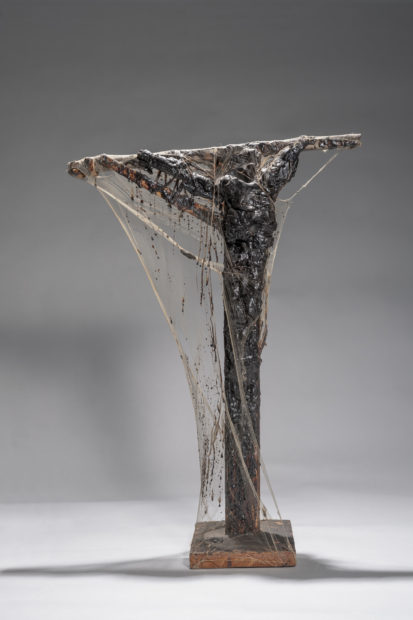 Wallace Berman’s Verifax collage Untitled (1968), presents an accumulation of visual culture: animals, the Statue of Liberty, religious figures, ancient Egyptian sculpture, hands in the air, the moon, an astronaut, and more. Through the effect of collage, the images seem like specters from  our collective psyche. Many of the other works in the exhibition offer an intense ugliness that forces the viewer to linger and understand, to seek clarity (and find that even the ugly are beautiful). Works such as Jay DeFeo’s Untitled (cross) (1953) and Bruce Conner’s Crucifixion (1960) render, albeit in different ways, the cross—an object and presence so ubiquitous throughout art history. DeFeo’s cross appears bandaged, troubled, and reverent. Conner’s nylon and wax Crucifixion suggests the bodily presence under the trauma of the event it’s named after. Through their materiality, these works simultaneously evoke disgust and wonder, and in fact many of the works in the show contain the troubling detritus of a material culture. 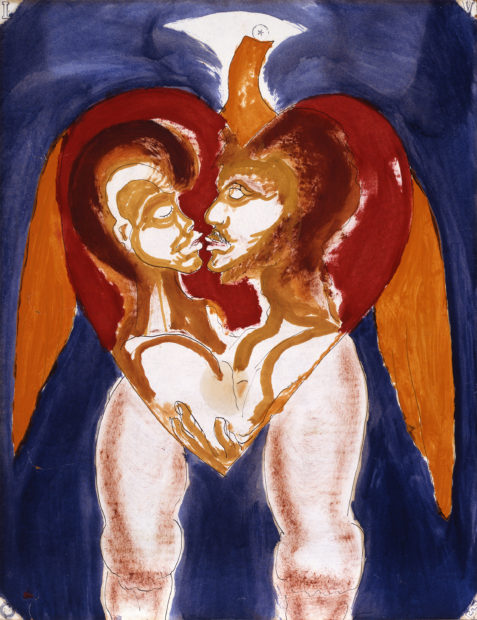 George Herms’ Untitled (ca. 1961) provides a rare moment of aesthetic pleasure. Untitled’s male lovers, embracing and kissing, are a holy union, and they’re enclosed in a heart that expands from a winged angelic torso, as if encapsulated in a heart that has burst forth from the body. The paint application is lush and delicate, and its tender sweetness sets the work apart in Holy Barbarians, which is indeed a fierce, visceral, and engaging show. The works in the exhibition come together to declare, to be seen, to be here, now.

Hear About the Life and Work of the...