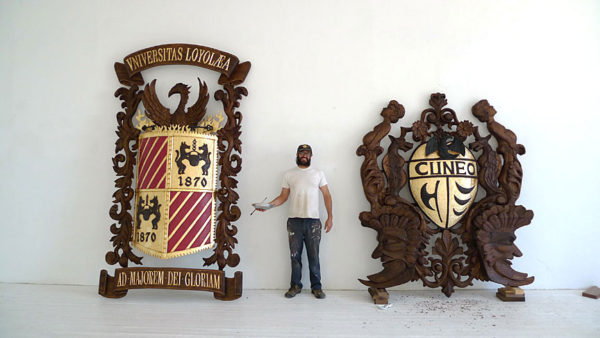 A few days ago, it was announced that the Chicago Archbishop Blase Cupich will be promoted to the rank of cardinal by Pope Francis, who announced it last week in St. Peter’s Square, Vatican City. You can read about that and about Cupich’s career here.

But here’s our clincher: Marfa’s beloved Camp Bosworth has been commissioned to create the crosier—a fancy staff carried by high-ranking Roman Catholics—for the occasion (via the Chicago Tribune): “Cupich, 67, will receive his red hat in Rome on Nov. 19, the day before the church’s Year of Mercy ends.” This description of Cupich may explain in part the choice of a real and celebrated contemporary artists to design his crosier: Cupich is “a relatively youthful voice and that’s a good thing. As American baby boomers, we’d like to see a certain modernity come to the Catholic Church.”

“Though this is the first time Francis has named American cardinals, it was no surprise to some that Cupich’s name was on the list unveiled Sunday. Chicago’s last six archbishops were named cardinals, and Cupich’s star has been on the rise ever since he leapt to the third-largest U.S. archdiocese from the diocese of Spokane, Wash.”

Cardinal is a big deal; really just a step removed from Pope. Sorry to gush, but how groovy is it that Bosworth’s distinctive work will (literally) be on hand for the ceremony? We assume Bosworth’s staff will be intricately carved, good-naturedly trippy, and at least partially painted or plated in gold. Can’t wait to see it. And this is just following Bosworth’s recent big commission for the AT&T Center/San Antonio Spurs.

Checking in With: Camp Bosworth