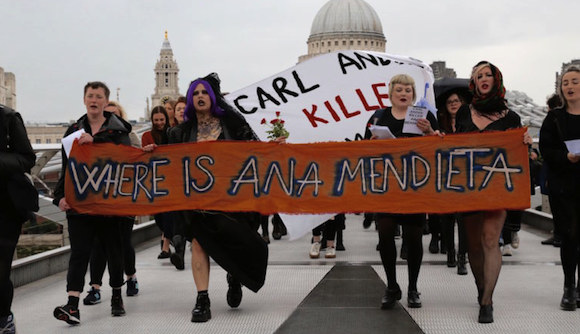 Protesters en route to the Tate Modern. Photo by and courtesy Charlotte Bell via Hyperallergic.

Dallas’ Nasher Sculpture Center announced the purchase of a group of works by the highly influential Cuban-American artist Ana Mendieta, thanks to the Kaleta A. Doolin Acquisitions Fund for Women Artists, established at the Nasher last year. (For particulars on the acquisitions and the Doolin Fund, read yesterday’s Glasstire news.) Director Jeremy Strick noted that, “While her influence on feminist art practice and performance has been enormous, available works by her are very rare.”

Since her death in 1985 at the age of 36, there are still many people who think her death was no accident and no suicide. She fell from the 34th-floor window of her Greenwich Village apartment; her newlywed husband, the legendary sculptor Carl Andre, was indicted, tried and eventually acquitted of her murder. Just last month, activists protested the inclusion of Andre’s work in the Tate Modern’s new extension, and the exclusion of Mendieta’s work, chanting, “OI TATE, WE’VE GOT A VENDETTA – WHERE THE FUCK IS ANA MENDIETA?”

“As an artist and a feminist,” says Kaleta A. Doolin, “I applaud the Nasher for its acquisition of rarely seen works by Ana Mendieta.”