With the violence and hatemongering that has dominated current events lately, the exhibition “Carnalismx Collaborative” at Freight Gallery couldn’t be more timely. Organized by San Antonio artist Michael Martinez, who identifies as queer and “Latinx,” the overriding goal of the exhibition is to present multiple perspectives on race, gender, and sexuality from a diverse group of queer artists.

The installation is divided into two sections on opposite sides of the gallery space, with artists grouped based on their gender or sexual identity. On one wall and in a mid-space installation, Martinez has paired works by Steven Hector Gonzalez of Dallas and Jose Villalobos of San Antonio, both of whom identify as gay. On the facing wall are works by artists who use identities that have come about since the original Gay Liberation Movement. These include Leticia R-Z of San Antonio, who is also queer, Ronnie Rene Ritchie of Peterborough, Ontario, who identifies as gender queer, and Peggy Sisouvong of Portland, Oregon, who is a trans woman of color. Poet, musician, and performance artist Polly Anna Rocha of San Antonio performed music at the show’s opening reception.

The word ‘Carnalismx,’ used in the title of the exhibition, is a term coined by Martinez to extend the meaning of ‘carnalismo,’ which is traditional Pachuco slang for brotherhood and loyalty among Latino men. In the same way that the term ‘Latino’ has recently been hybridized into ‘Latinx’ to refer to Latin Americans who do not identify as either male or female, ‘carnalismx’ is meant to embrace a wider range of people. For the show, Martinez offers this definition of the word: “Carnalismx. noun. /car · nahl · eez · mex/: The qualities of sisterhood, including more than just our cis-ters, & brotherhood across all borders and boundaries.”

By far the most engaging work in the exhibition is Sisouvong’s short 3D animation, Feeling Blessed (2016). In this 20-second looping clip, Sisouvong attempts to come to grips with her gender dysphoria, a form of depression common among trans men and women that manifests as an all-consuming hatred towards their bodies. The central image in the animation is an iPhone displaying a selfie of the artist that has been altered using Snapchat’s dog face filter. As the phone spins back and forth, it is surrounded by floating antidepressant pills and flashing text bubbles that tell a story of calls for help and support from friends. With all of the elements in the video suspended and in continuous movement, it is clear that Sisouvong’s quest for acceptance by herself and others is an ongoing struggle between self-loathing and self-love. 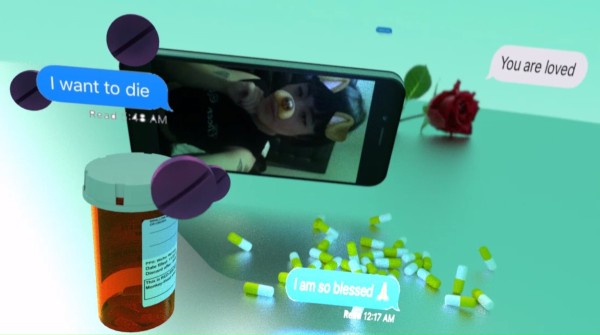 As a person who identifies as gender queer, Ritchie is among a growing number of individuals who see themselves as neither male nor female. Commonly used pronouns such as ‘he,’ ‘him,’ ‘his,’ ‘she,’ ‘her,’ and ‘hers,’ therefore, do not adequately describe a gender queer person. Instead, their preferred pronouns are ‘they,’ ‘them,’ and ‘their.’ Direct and unflinching, Richie uses a comic book format as an educational tool to inform their audience about these changes in language. In Pronoun Water Torture (2015), where the protagonist resembles the artist, Ritchie presents a whimsical narrative in which tiny word bubbles with the word ‘drip’ parallel annoyances felt from constant misgendering. 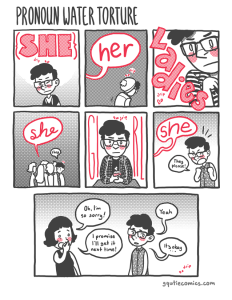 Occupying the center of the exhibition space, Villalobos’ Forty-Nine (2016) is a heartfelt memorial to the victims of the recent massacre in Orlando, Florida. Each of the victims is represented by a suspended handkerchief that has been inscribed with an individual’s name and had its corner dipped in pink paint. The triangles formed by the pink corners of the handkerchiefs refer to the pink triangles of the Nazi era that were reclaimed as the Silence = Death symbol during the AIDS crisis in the 1980s. Villalobos creates a truly thoughtful installation that would be even more powerful if it was presented in a more solemn environment that promoted deeper contemplative reflection. 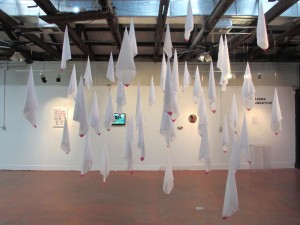 In another body of work, Villalobos explores the insecurities gay men often face around the idealized body types that dominate gay culture and media. For this work Villalobos draws on his personal experiences—five years ago, when Villalobos first came out, he was overweight and was shunned by other gay men. In the artist’s Skin and Within series (2015), ceramic folds of flab are treated as something precious, set within velvety red cloth, and embellished with silk flowers. The queer-specific content of these assemblages may be difficult to decipher without explanatory labels (which are included in the installation), given that struggles around weight and beauty affect many people in Western societies. The softness of the fabric, the eccentric bulkiness of the clay, and the kitschiness of the flowers awkwardly combine to suggest a complex relationship with one’s own body. 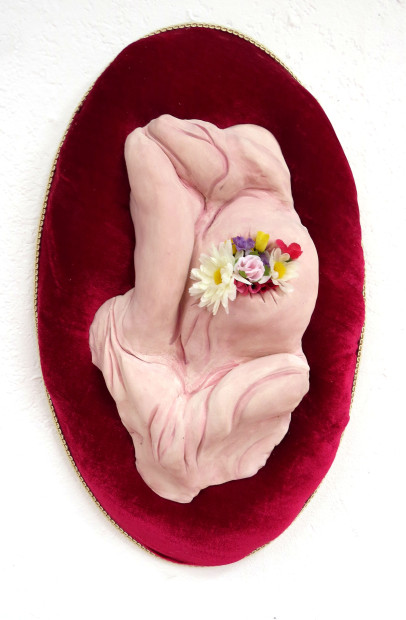 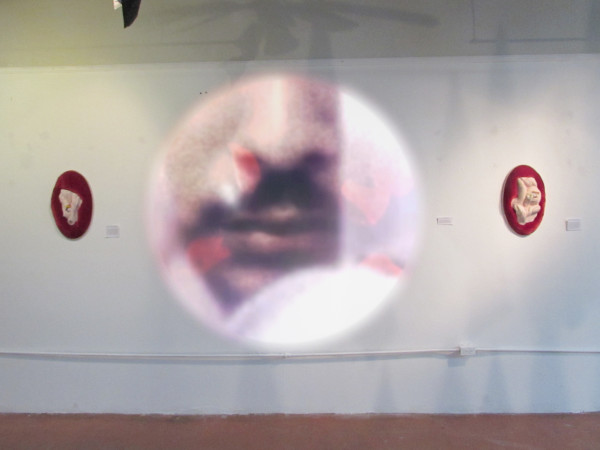 Perhaps the least queer offering in this queer voices exhibition is Leticia R-Z’s Psychopomps (2015), which would feel equally at home in a project devoted to feminist perspectives. Blending elements from Aztec rituals and Catholic religious iconography, this sculptural assemblage consists of a receptacle for offerings of hair, flanked by two intimidating female deities intended to perform the traditionally male role of guiding one’s soul through the underworld. While subverting the conventional treatment of female religious figures as fertile and nurturing, the Pscyhopomps altar is also feminized by virtue of its soft materials and the domestic processes (embroidery and needle felting) used to create it. 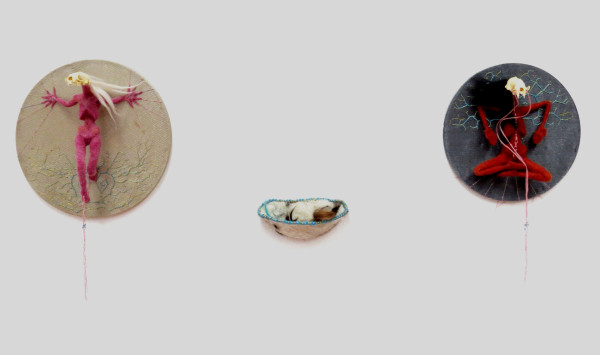 If you’re looking for a joyful or celebratory exhibition about queer issues, you won’t find it at “Carnalismx Collaborative,” which features subdued and forlorn works at a time when many people are mourning the literal and figurative victims of violence and homophobia, transphobia and biphobia.

Continuing through August 6, the exhibition is open by appointment.