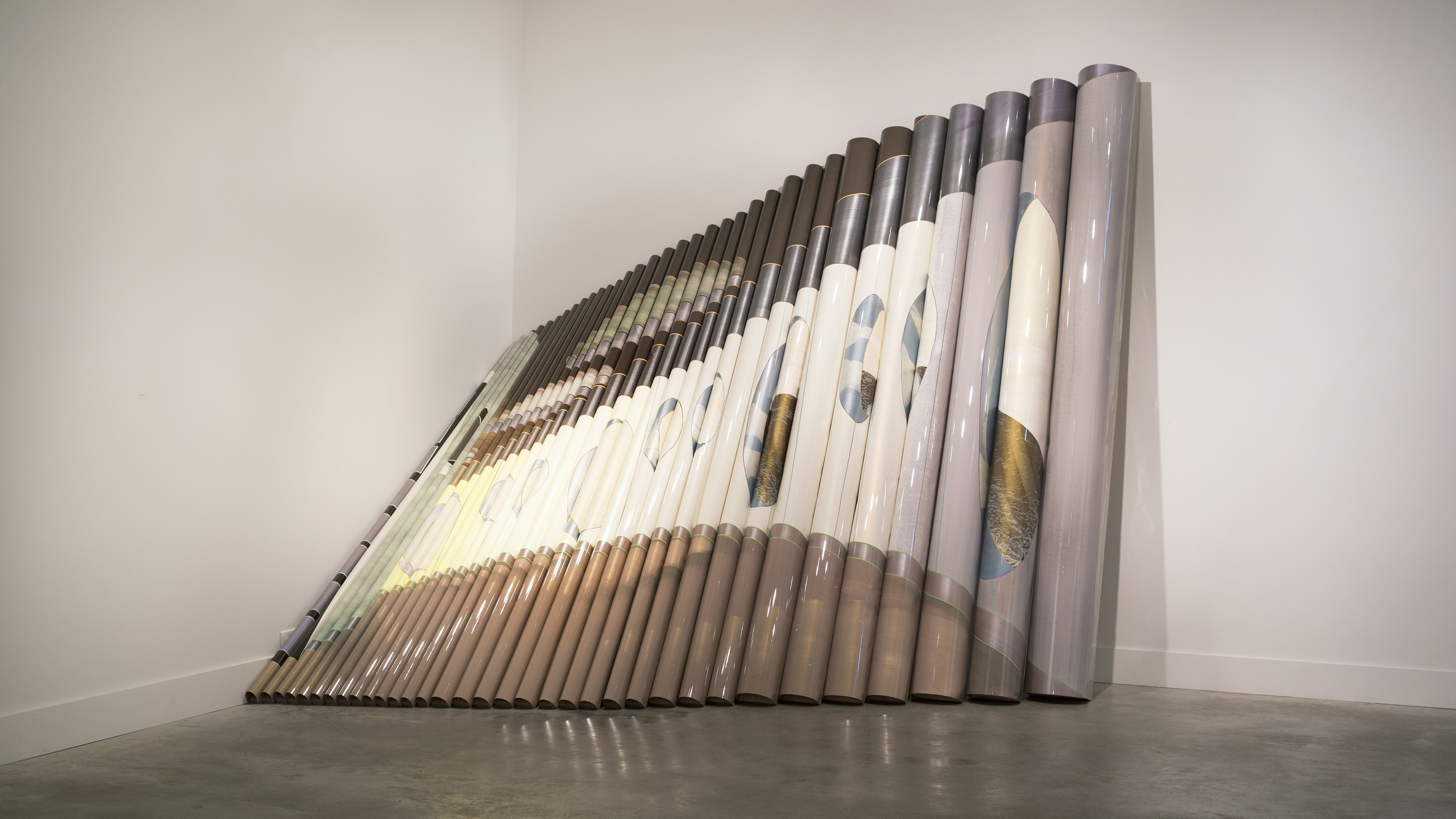 Rachel K Bury, No Need for Other Worlds (for precisely the same reason)

At first glance, you could mistake grayDUCK Gallery’s Current Affairs show in Austin for a solo show. You’d be wrong. Or you might think that the two participating artists at least know each other or even studied together under the same professors. You’d still be wrong. But there’s an almost seamless dialogue happening between the works of Rachel K. Bury and Zack Ingram. Both artists are interested in the hybrid, and both create playful artworks that speak the languages of sculpture and painting simultaneously. Still, their similarities run deeper than just this formality. Both of their work addresses certain social ideas, some more specific than others but often around issues of conformity. It’s rare that a two-person show harmonizes this well. More often two-person shows are studies in contrasts, or arranged under a general theme and forced similarities. Current Affairs instead attests to both the individual skill of Bury and Ingram, as well as the curatorial strength of grayDUCK’s owner-director, Jill Schroeder. 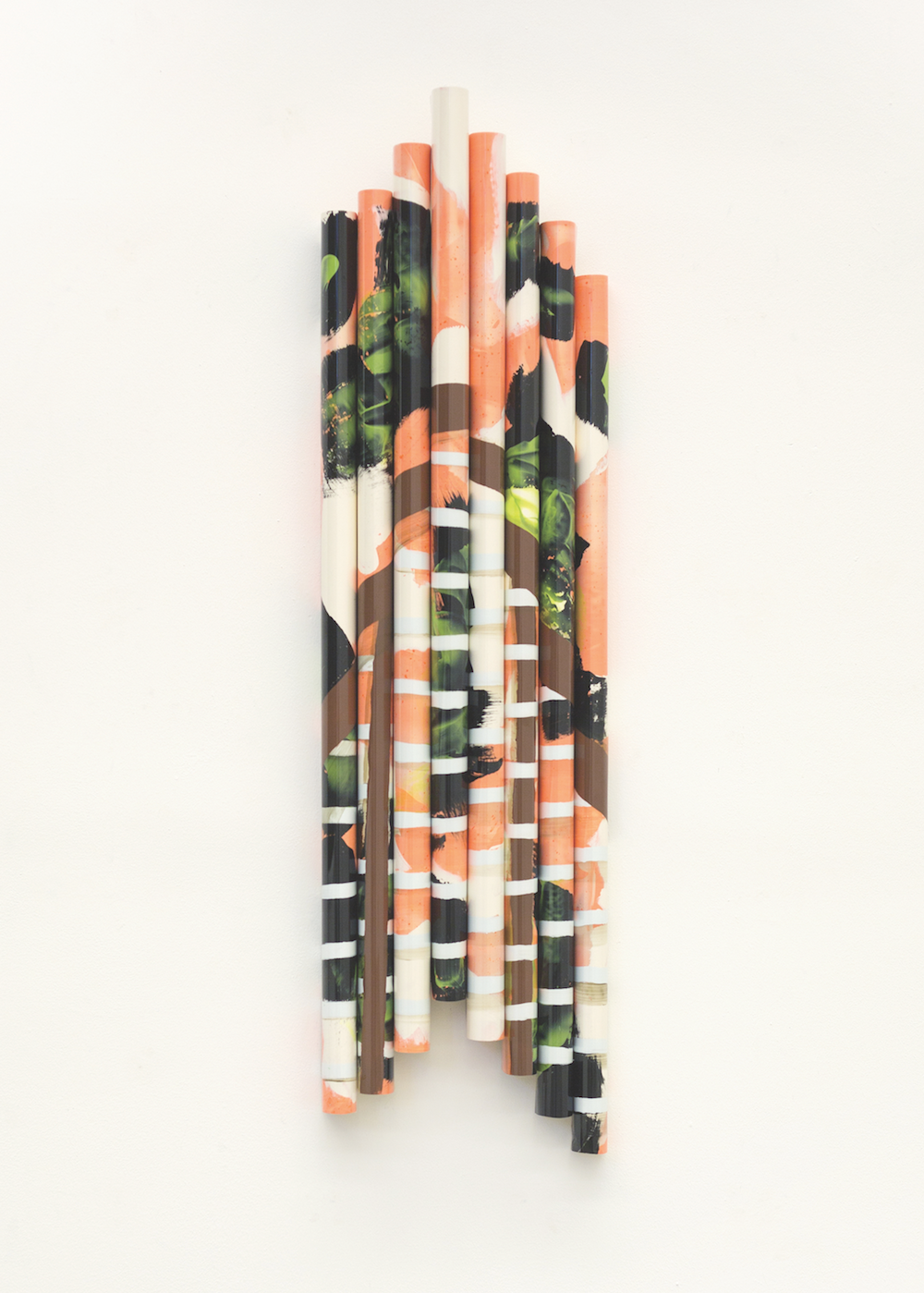 A two-year alum of Cranbrook Academy of Art, Bury has been exploring the irregular boundaries of sculpture’s territory since her MFA exhibition. Her dedication to the idea has led to a body of work that, though at times a bit redundant, is steadfast in examining an inherent drive for individualism in the face of regulated sameness. Her six pieces in Current Affairs are all roughly the same thing: tubes of acetate molded into convex shapes that are fitted together and painted in abstract patterns. But it’s though this conformity that each artwork reveals a distinct personality. 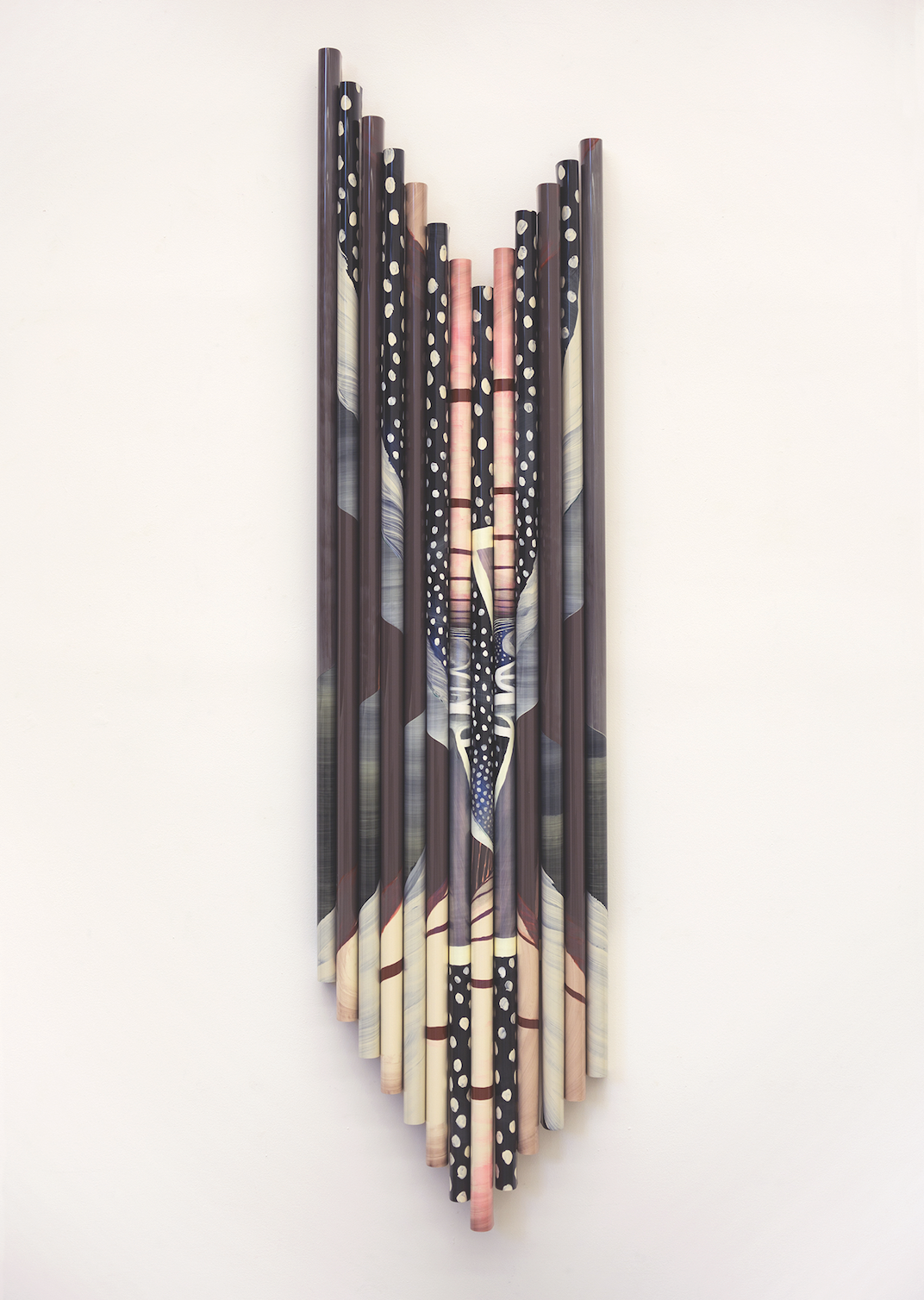 Ranging in height between 48 and 87 inches, works such as No Egress (the gate) and Its Path (inner eye) hang on the wall. While the former is dominated by a rosy palette, the latter is far earthier with rich browns and fern greens, and these variations further distinguish themselves within each piece. Within one work, each individual sculpted sheet of acetate sits at a slightly different height from its neighbors and leans off of the wall at a slightly different incline. Although they are all joined together by a wooden backing, they appear to strain against that foundation, as if they’re both pushing and pulling on each other. Differences also appear in the various patterns painted on the pieces of the acetate. Stripes collide with spots, and floral patterns are offset against a passage of total white.

And acetate is delicate. I noticed this as I looked over Bury’s largest artwork, No Need for Other Worlds (for precisely the same reason). This mammoth—at places more that ten feet tall—slouches in the far corner of the gallery. It was built on site. Peering around the side of it, you can see where it’s directly attached to the gallery wall with thin, small nails. Along a few of the different lengths of acetate are several dents and divots. Whether intentional or not, these little imperfections got me thinking about fragility, and the cost of individuality. What dangers do we put ourselves through to be one of a kind?

The cohesion in Bury’s work pairs well with the emergent unity of Ingram’s pieces. Ingram is a first-year MFA candidate at The University of Texas. And like all good first-year grad students, he’s sampling from a variety of materials and processes. While Bury maintains a steady line with her tubular acetate, Ingram gives you rags, phototransfers, and different takes on three dimensions. Some pieces like Raised By Wolves and Hands That Do Real Work i, ii, iii lean toward the expanded field of collage while others, such as Trophy, are continuations of found-object sculpture. 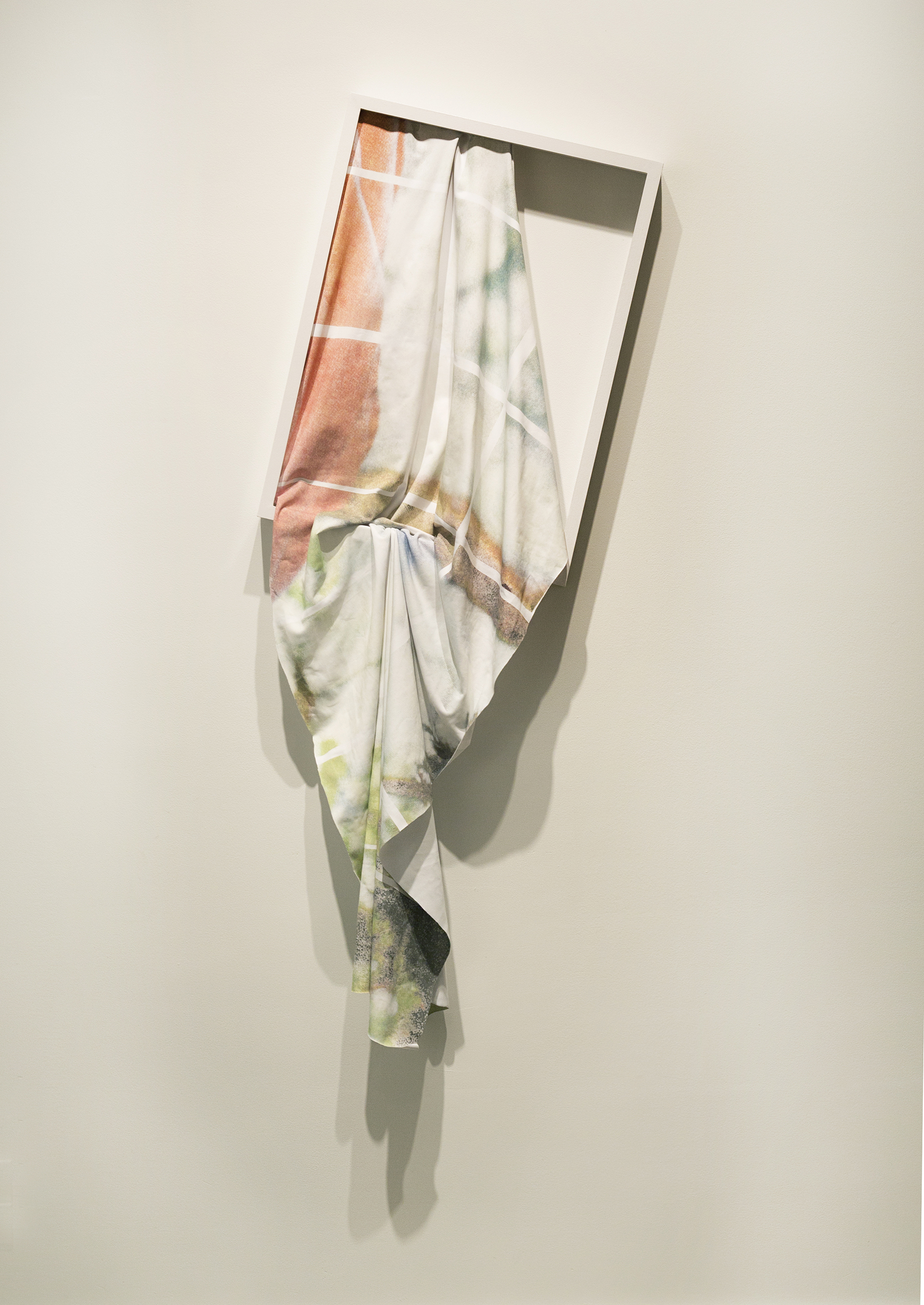 What the works do have in common is a subversion of the blue-collar tough guy persona, seen in the sheep skin of Trophy, the rags of Sweat and Semen and standin there with piss runnin down his leg, and the imagery of Hands That Do Real Work i, ii, iii. The rags are discarded mechanic grease rags, the images come from antique farm tools, and the sheepskin alludes to both trophy kill and farmhouse blankets. But let’s not forget that sheepskin also makes condoms, and those antique tools look more and more phallic the longer you study at them. (The rags, by the way, are printed with a variation of Andy Warhol’s iconic flowers.) Then there are the unexpected pieces of paper resting between the two layers of cotton in Raised By Wolves. Schroeder told me they’re images from gay pornography. 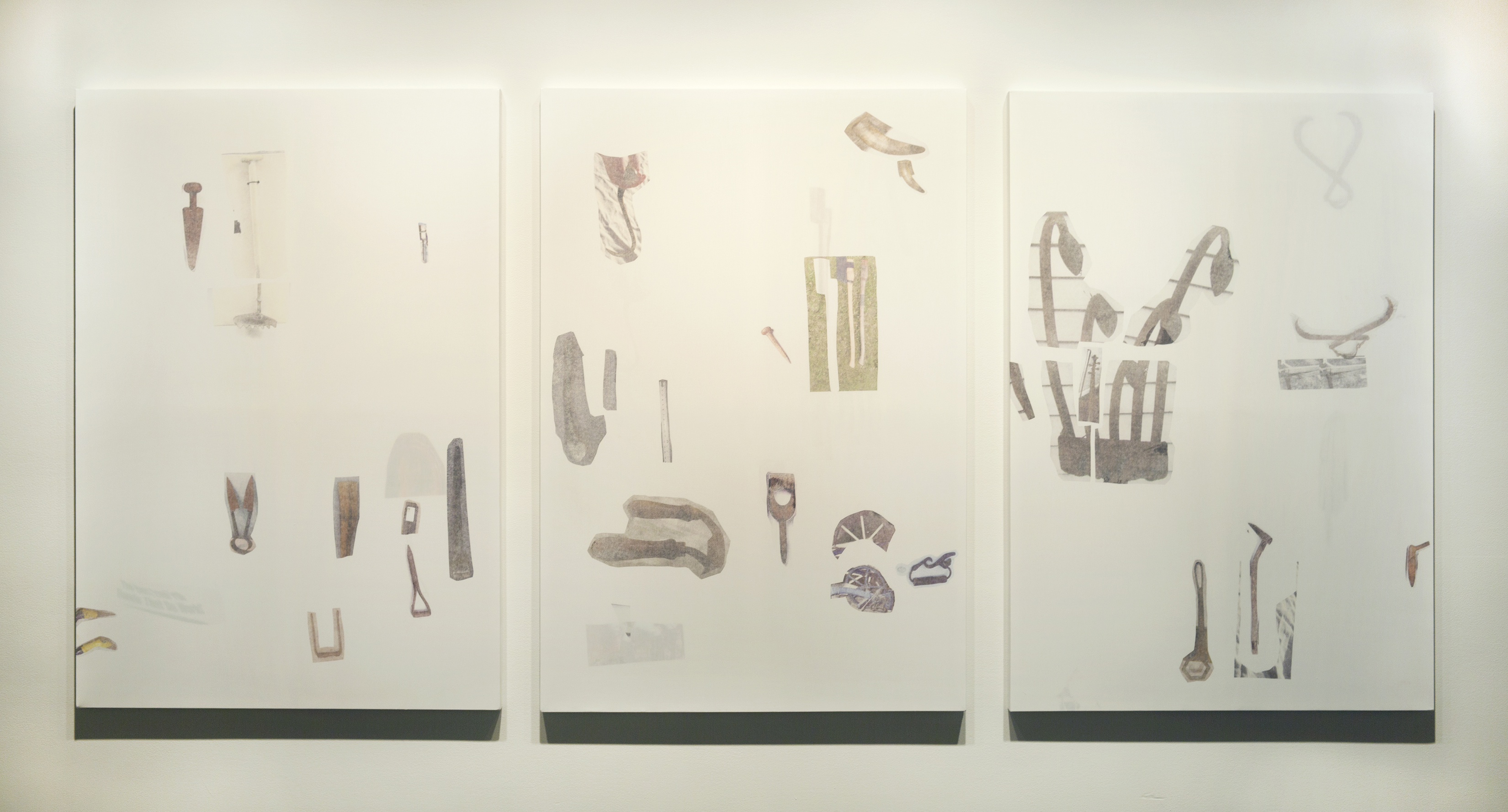 Zack Ingram, Hands That Do Real Work i, ii, iii.

So Ingram seems interested in overturning stereotypes, in challenging the notion that homosexuality has no place in the rural farmlands of Nebraska or the sheep pastures of Montana. I half expected the book sitting on top of Raised by Wolves to be a copy of Annie Proulx’s Brokeback Mountain. That same loneliness and longing Jack and Ennis contend with during their love affair is in Ingram’s art. Things feel just out of reach. Some of the farm imagery lies beneath the slightly transparent surface of cotton, and the rags hang too high to grab.

So Current Affairs gives us two artists’ subtle and sophisticated visions of straining against narrow social convention. When I visited the show, Schroeder pointed out that some of the pieces were hung near each other simply for aesthetic reasons, and while Bury and Ingram overlap at places in their use of color and abstract form, they also sit in concert in their approach to art as method for creating social awareness. I haven’t seen such varied and abstract sculpture take on this task in some time, and it’s a refreshing reminder of its capacity to do so.

Through June 5 at grayDUCK Gallery, Austin.