by Barbara Koerble May 28, 2016
FacebookTwitterEmail 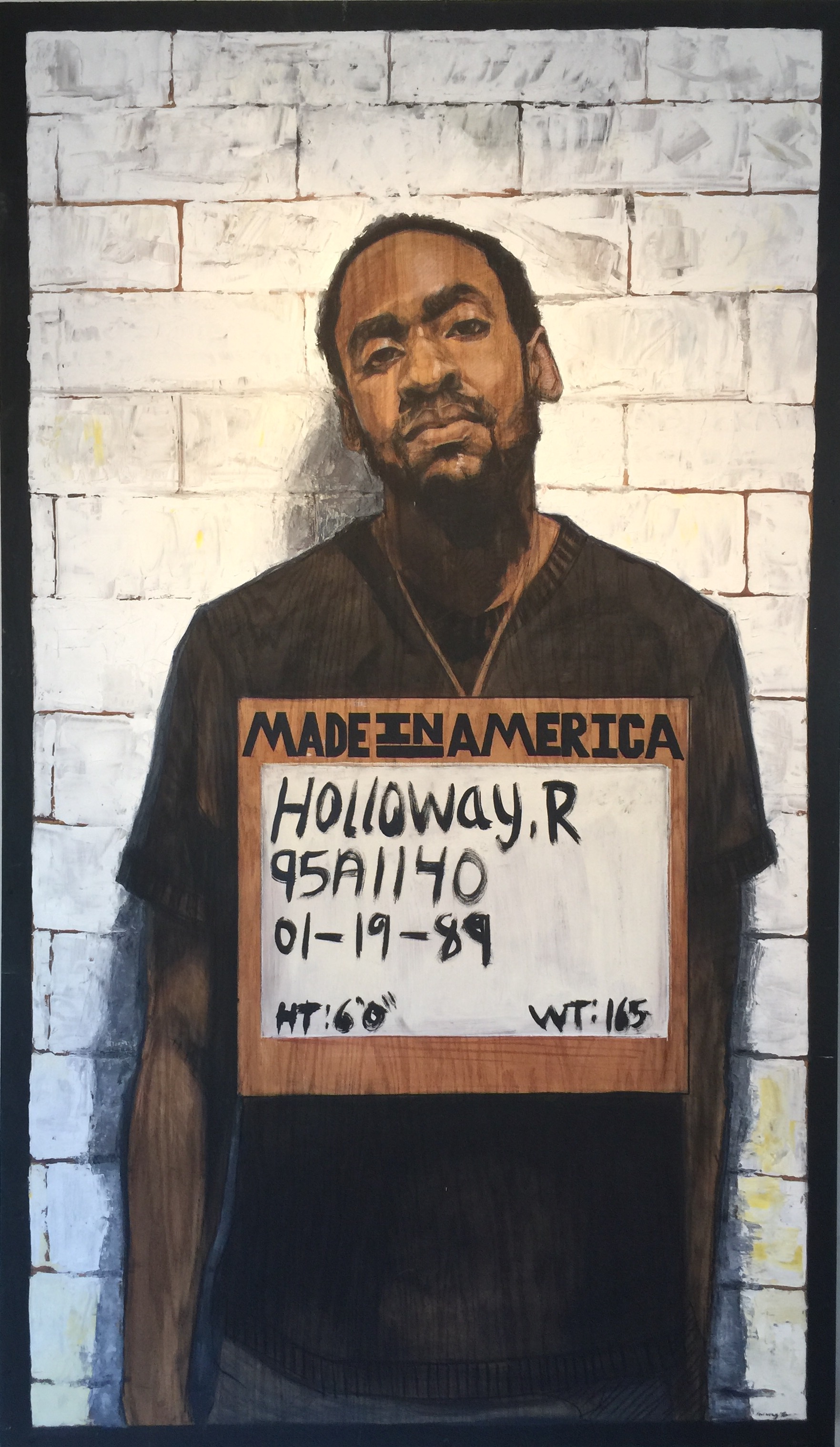 It’s fitting that Riley Holloway’s work was noticed by the partners behind Fort Works Art. Lauren Childs and J.W. Wilson have made a commitment to feature local talent in their recently opened Fort Worth space, and although this is not Holloways’s first solo show, the oil-on-panel works and mixed-media drawings represent a major milestone for the 27-year-old artist as proof of his artistic growth during a two-year period of concentrated work. (The artist is prolific: 19 of the 25 panel paintings were completed in 2016 alone.) Holloway’s portrait subjects in this show comprise a close circle of his family, friends and mentors—hence, the artist’s title for his exhibition is The People I’ve Come To Know. 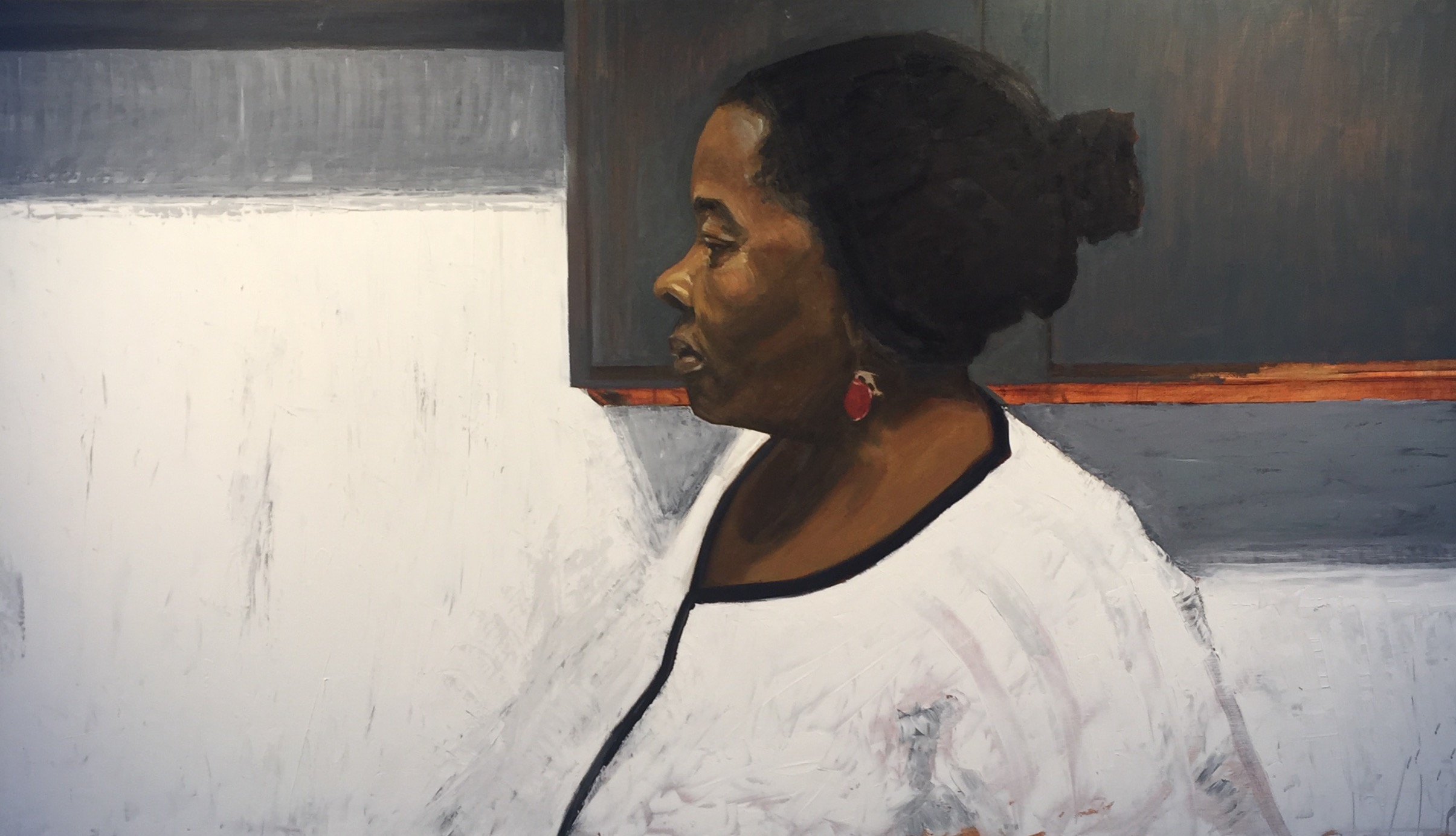 Riley Holloway was encouraged by his mother when he was young to create art. She was a figurative painter and sculptor, and clearly her inspiration made a crucial difference in her son’s life. “She’s the reason I started art to begin with. She’s the first one to give me an anatomy lesson, at age eight,” he says. She is a frequent subject of his paintings and three portraits of her are in this show. They are among the strongest images in the room.

Holloway’s artistic trajectory initially led him to a two-year period studying motion graphics at the Art Institute of Dallas. But he really wanted to learn to paint: “I was trying my hardest to learn oil painting on my own. I realized that I needed some help with that.” So when an Art Institute teacher told him about the Florence Academy of Fine Arts, he jumped at the chance to join in a three-month painting workshop at the Academy in Florence, Italy. After that, in 2010, he reached out to Michael Mentler, the founder of the Society for Figurative Arts based in Addison, Texas, to learn more about anatomy. “When I first got there he told me that in his studio I’d learn how to learn, and I have to say that changed my life.” Then in 2012, he accepted a three-month art residency at the Fairmont Hotel in Dallas which resulted in his first solo exhibition, titled Shook!, in the Gallery of the Fairmont Dallas. This experience “taught me how to put together a body of work that was consistent.” 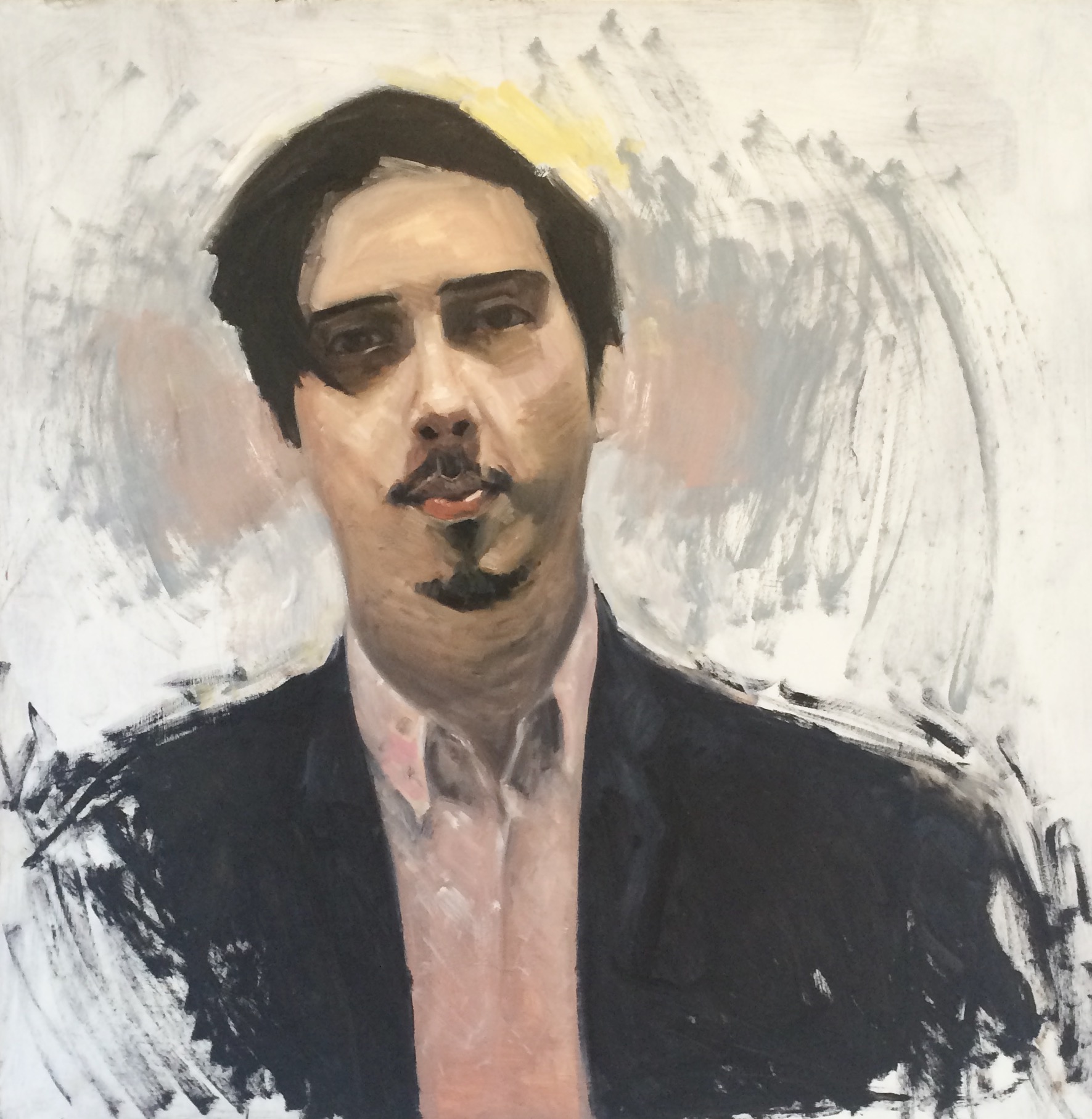 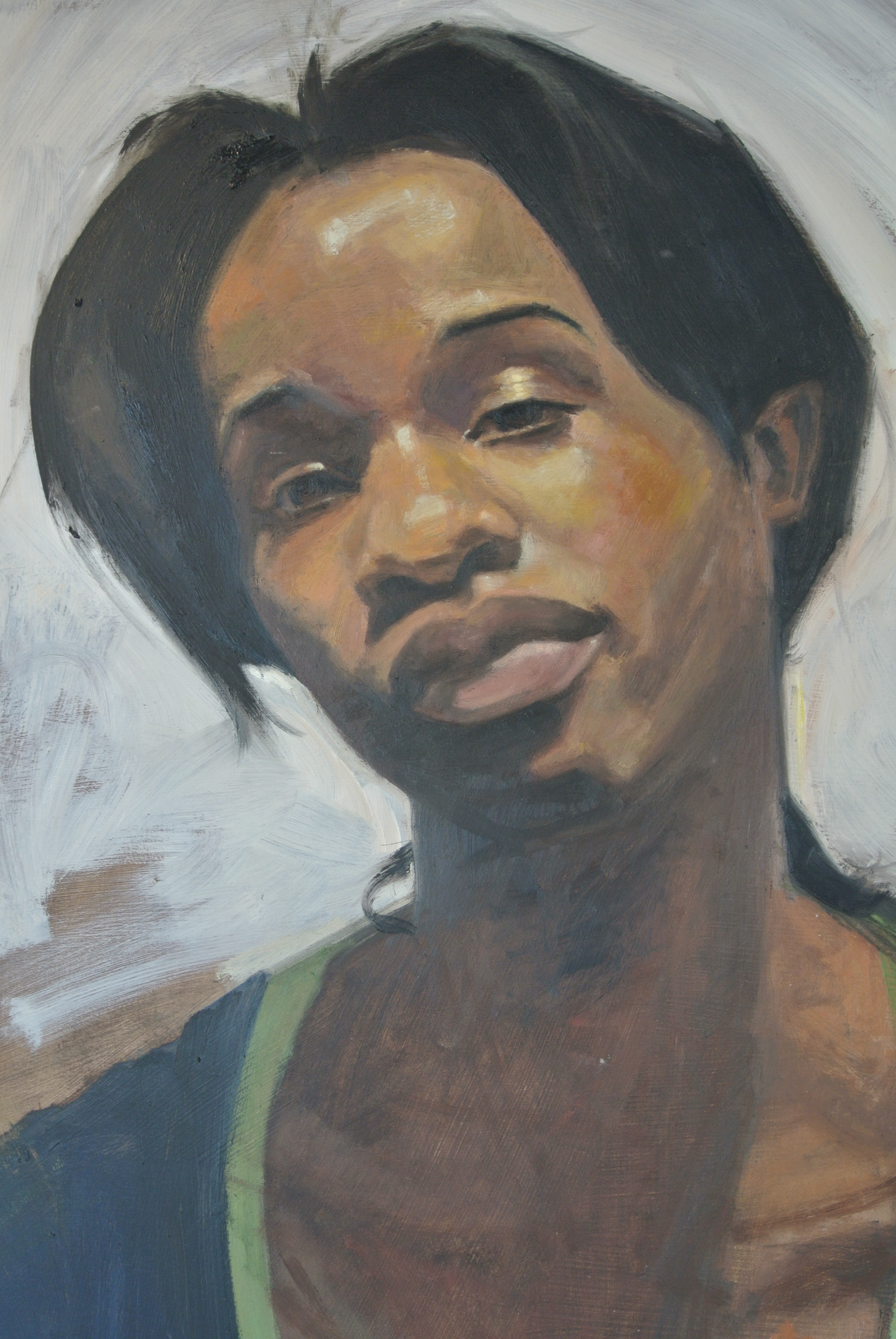 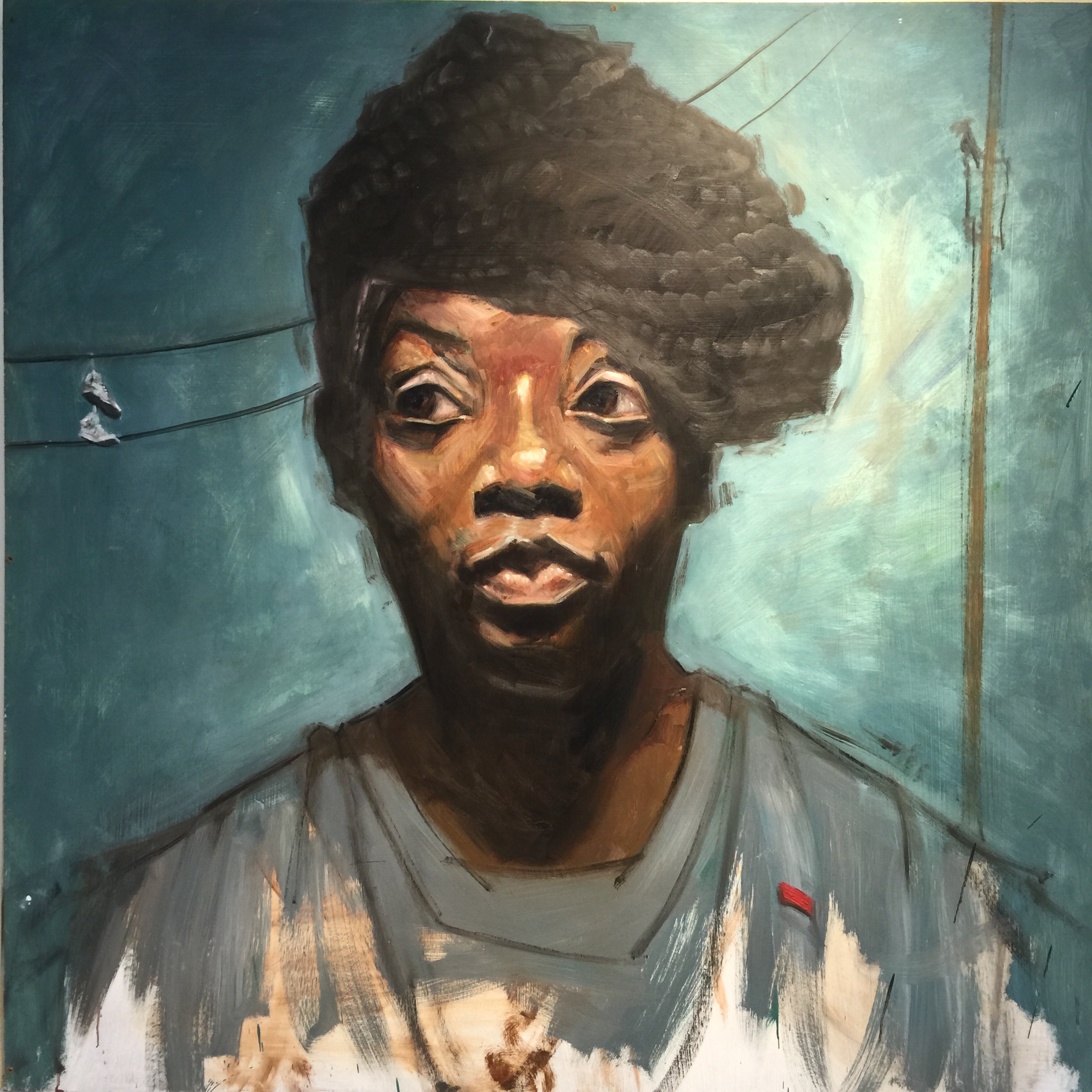 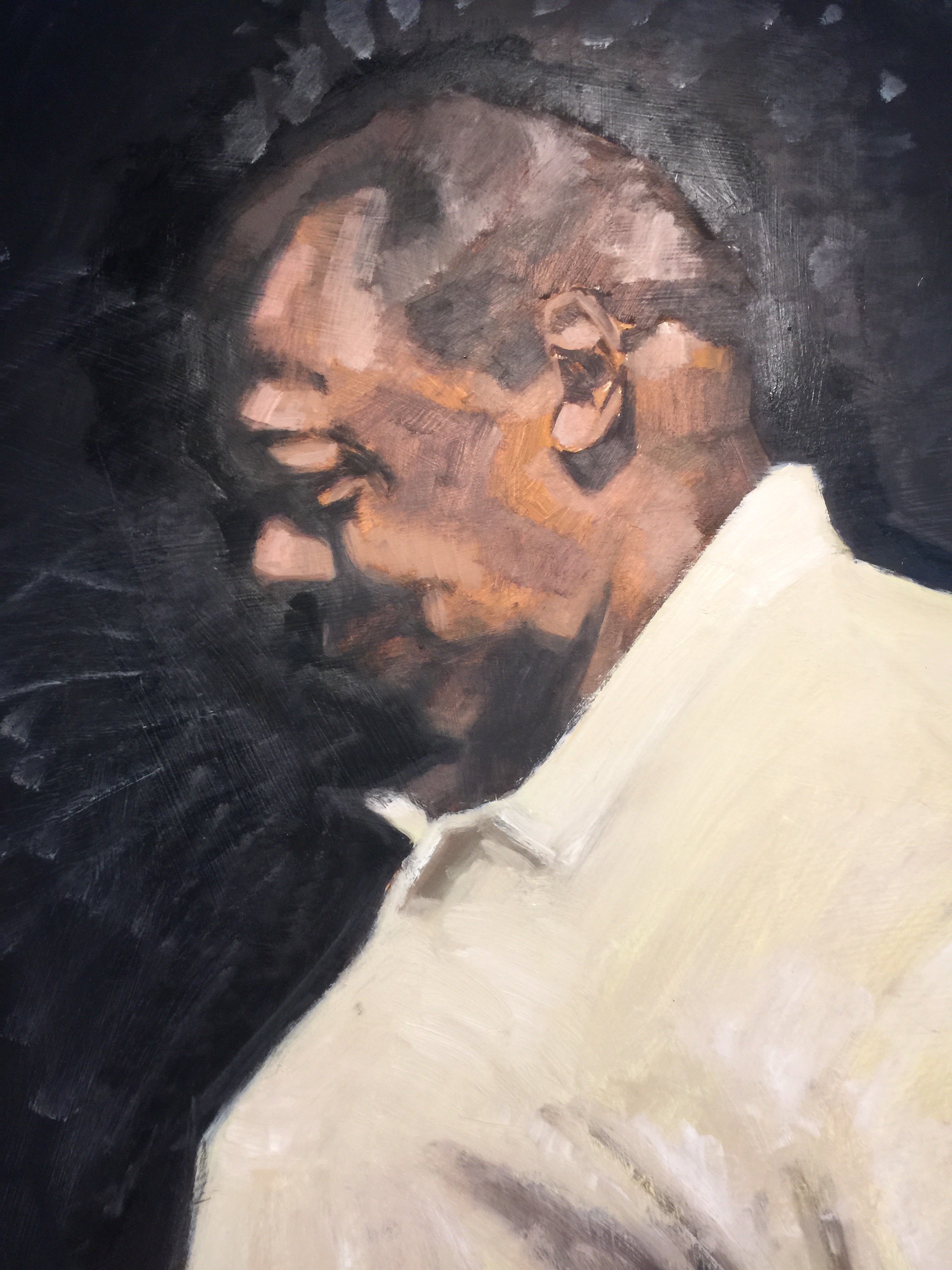 Holloway is developing a distinctive style. The faces of his portraits are worked to a higher degree of finish, often leaving the loosest brushwork around the perimeter and lower part of the figure with an ‘unfinished’ look, such as in Renzo, Thinking of You and Blue Sky. This effect naturally draws the viewer’s eyes back to the face of the sitter, where the energy of the painting coalesces. Holloway says that he learned to light the figure when he was in Florence.

Lighting figures strongly into his style, as seen in the luminous quality of his wife Kelsey’s face (Thinking of You), but his way with light shows even more in his compositional choices that add drama to certain portraits by manipulating light and dark areas in an almost baroque manner. In Uncle Babe, the upper torso of his uncle is starkly lit, but around the head and body is an enveloping, crepuscular darkness. Repeated brushstrokes around his late uncle’s head catch the light and create a halo effect within the deep gloom. It is not surprising that while in Italy, he learned to apply the style of tenebrism in his lighting effects. 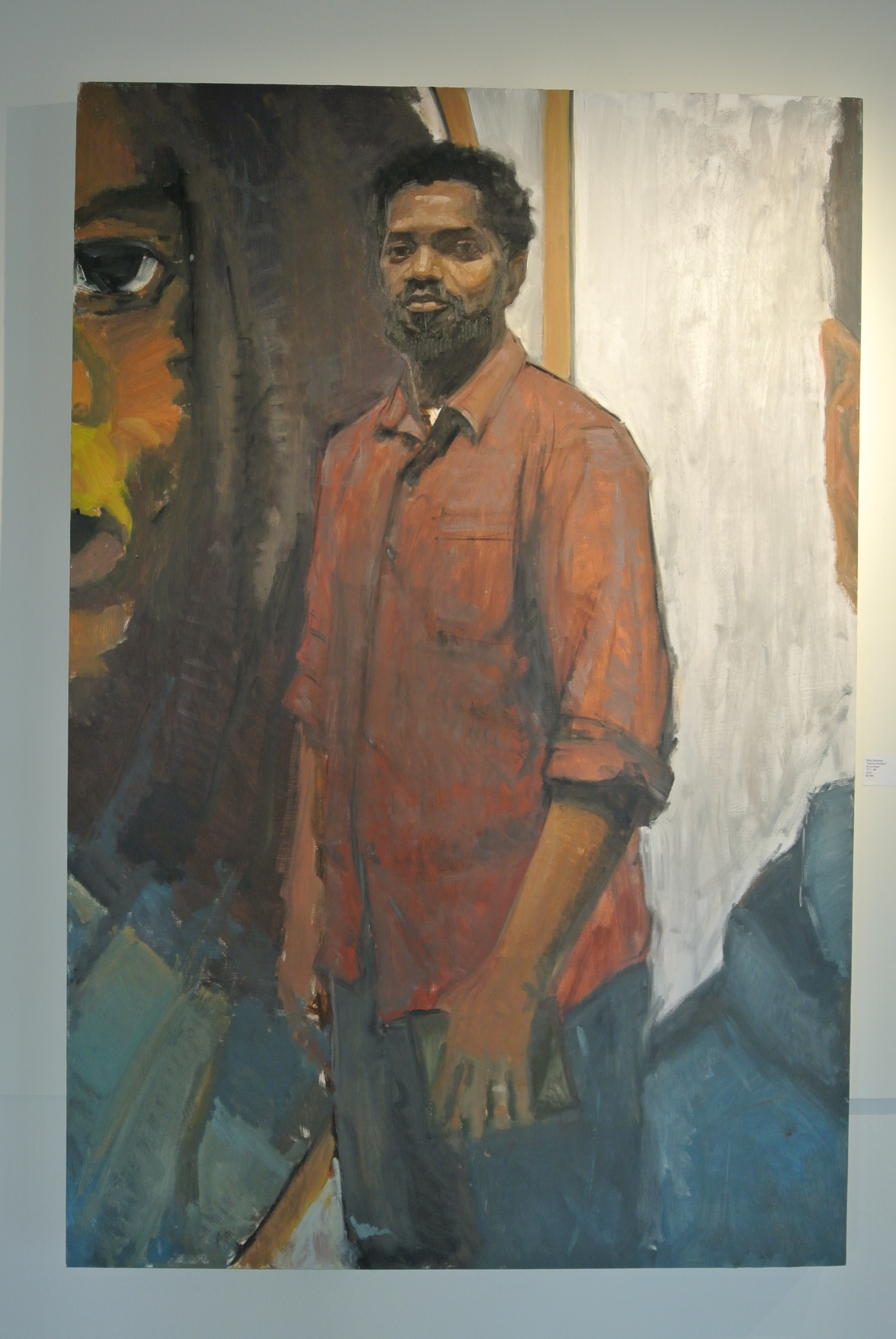 Holloway’s compositional use of lighting is clear in his depiction of painter and UTA professor Sedrick Huckaby flanked by his own paintings—the cropped face on the left side, due to its huge scale, is recognizable as one of Huckaby’s portraits. Holloway positions the figure of Huckaby to partially merge with his own painting on the left, but then on the right side, the artist is set against a light background. Likewise, the above portrait of Holloway’s mother has her profiled head framed by a dark rectangle, but she gazes ahead at a white area of pure light. Both lighting strategies encourage us to vicariously step into the clarity of that light—that of a mother’s love and hope for her son’s future, and that of an artist-teacher’s inspirational path. 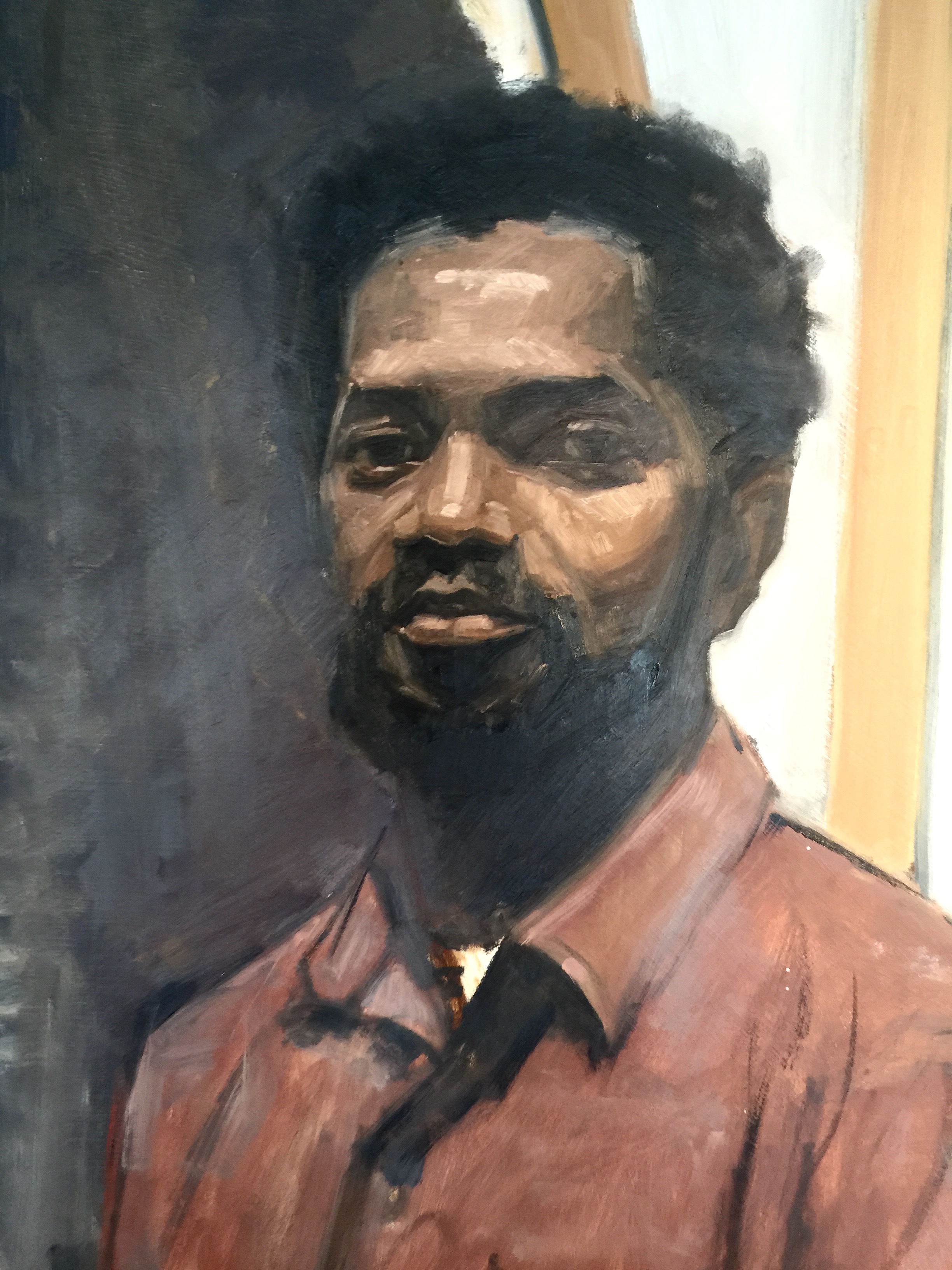 Holloway says the best advice he has received has come from Huckaby, who advised him to “be career-oriented, to hold onto long-term goals, and to educate [your]self.”  As a mentor, Huckaby also set an example for Holloway’s portraiture in his own commemoration of significant members of his family as well as community members. (Note: Selected lithographs from Huckaby’s community portrait series—The 99%—are currently featured in the exhibition Identity at Fort Worth’s Amon Carter Museum of American Art.) Holloway says he plans to enroll at the University of Texas at Arlington, where he’ll study painting under Huckaby. Holloway also seeks advice from Trenton Doyle Hancock, another artist who has encouraged Holloway to return to school. 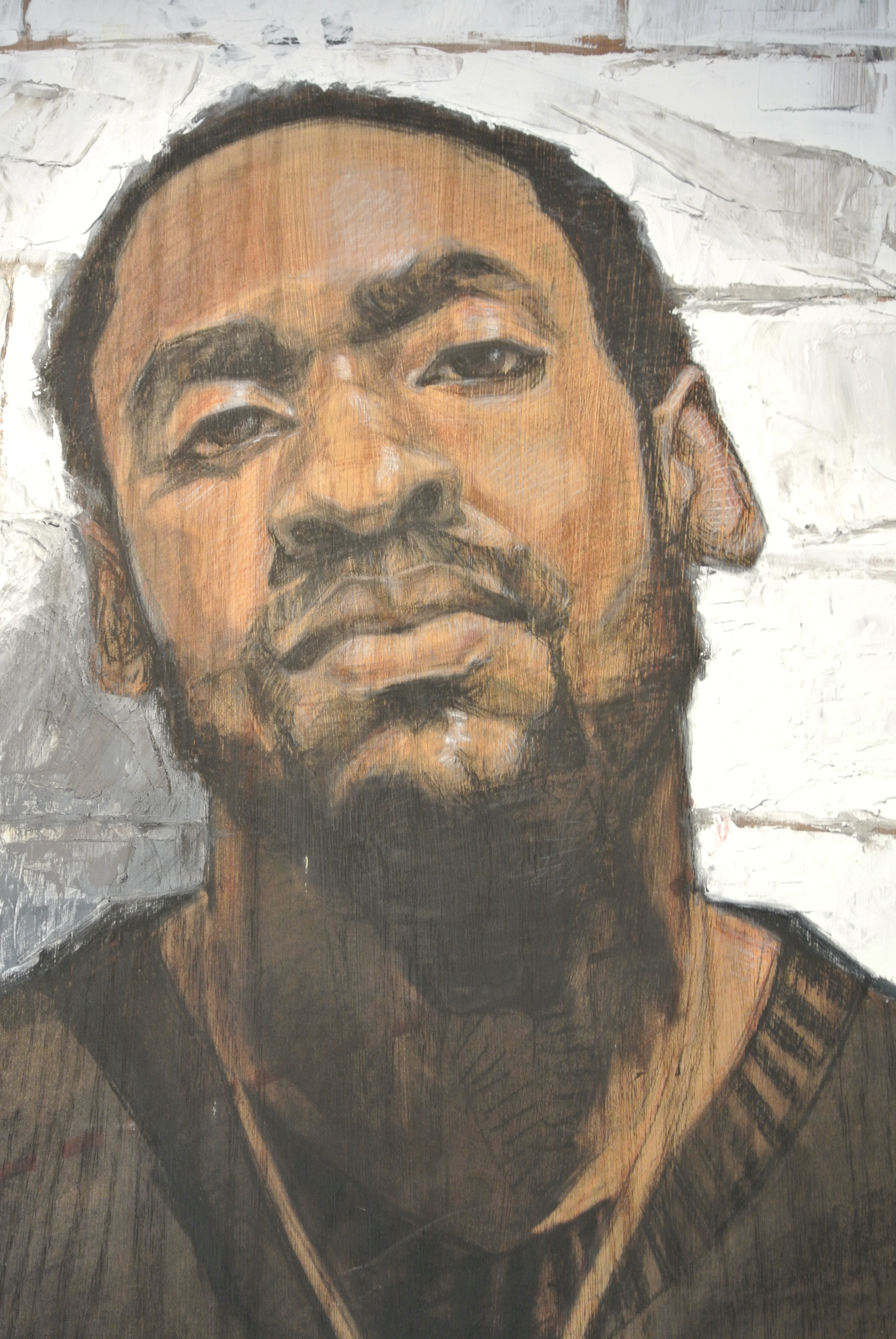 Made in America (Self Portrait) detail 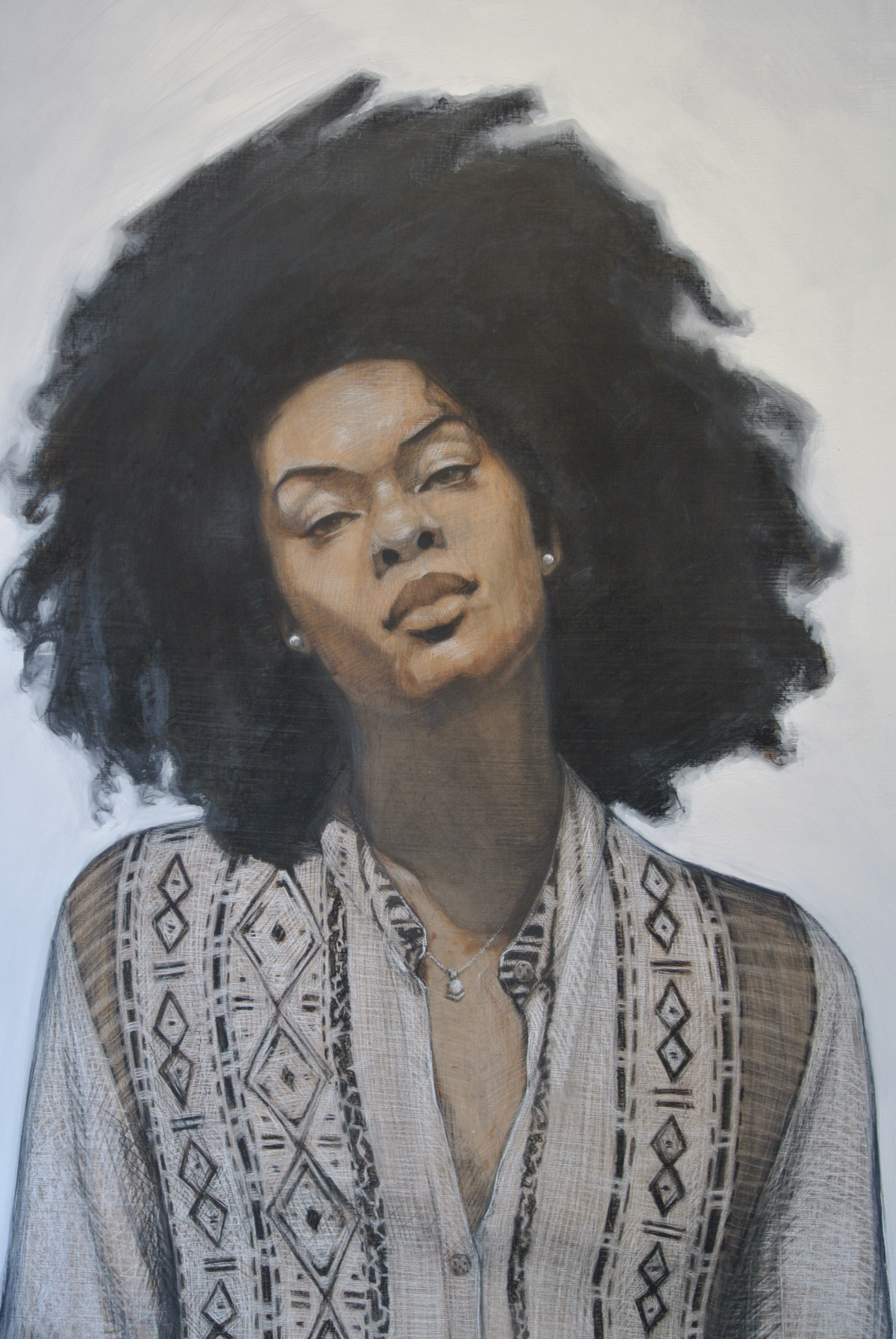 Holloway paints on wood panels that he usually builds himself. The grain of the wood shows through thinly painted passages in some works, and he sometimes highlights this with a layer of clear gesso, “so that the wood becomes part of the piece.” One of his favorite techniques is to combine charcoal drawing with oil painting, as in Erika Oliver’s portrait. After applying the gesso, “I then stain the wood and complete the figure in charcoal. The last step is adding oil [paint], usually just to the background.” 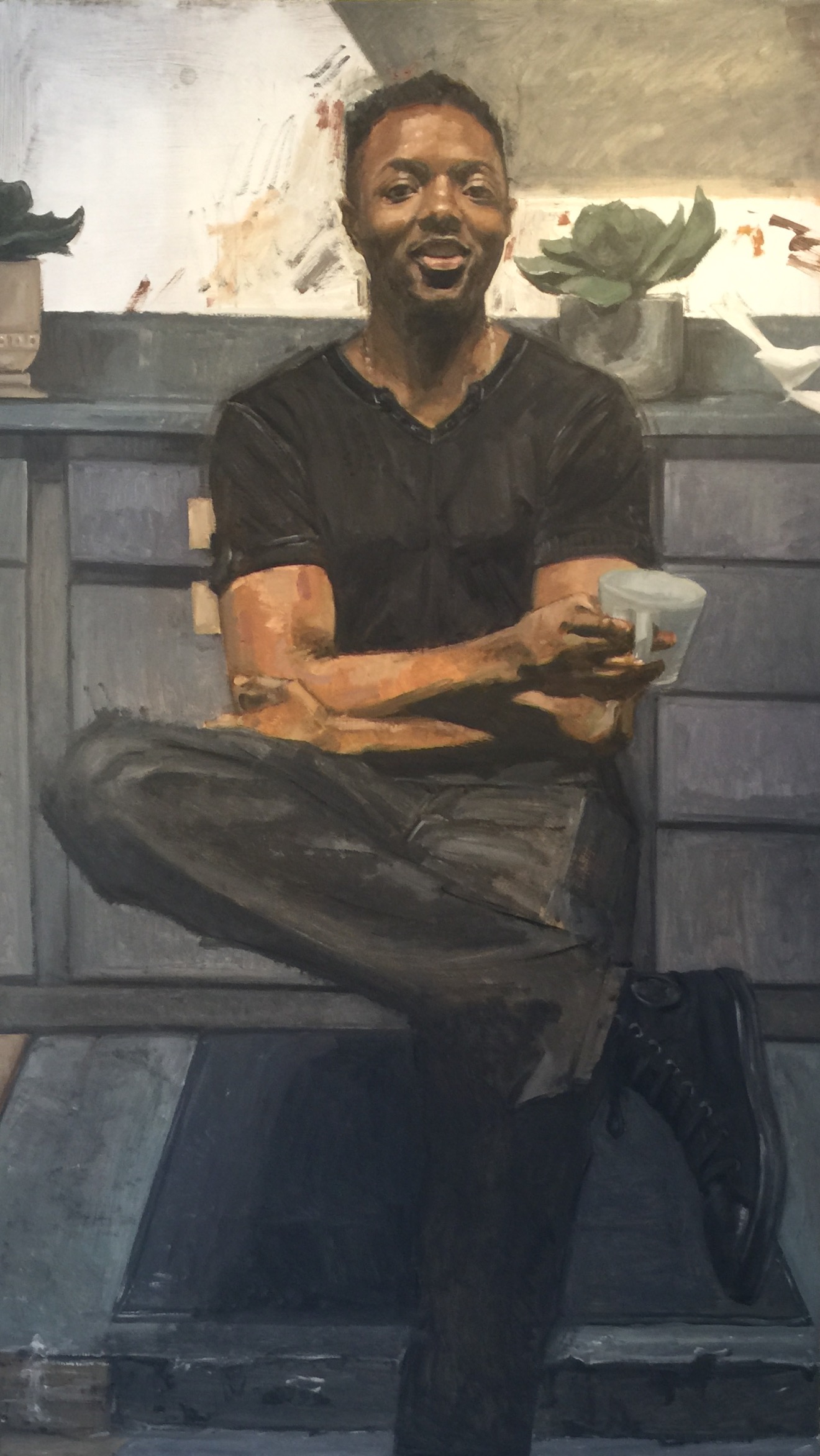 During Holloway’s recent artist talk at the gallery, he offered an additional glimpse of the personalities behind the portraits by playing selected audio excerpts of his interviews with a few of his subjects and their revealing responses. Erik Eddison, Holloway’s best friend, describes how he instinctively learned to avoid being caught in drive-by shootings in his Los Angeles neighborhood. The oral histories add a multi-media dimension and expansive storytelling to the portrait subject’s backstory. 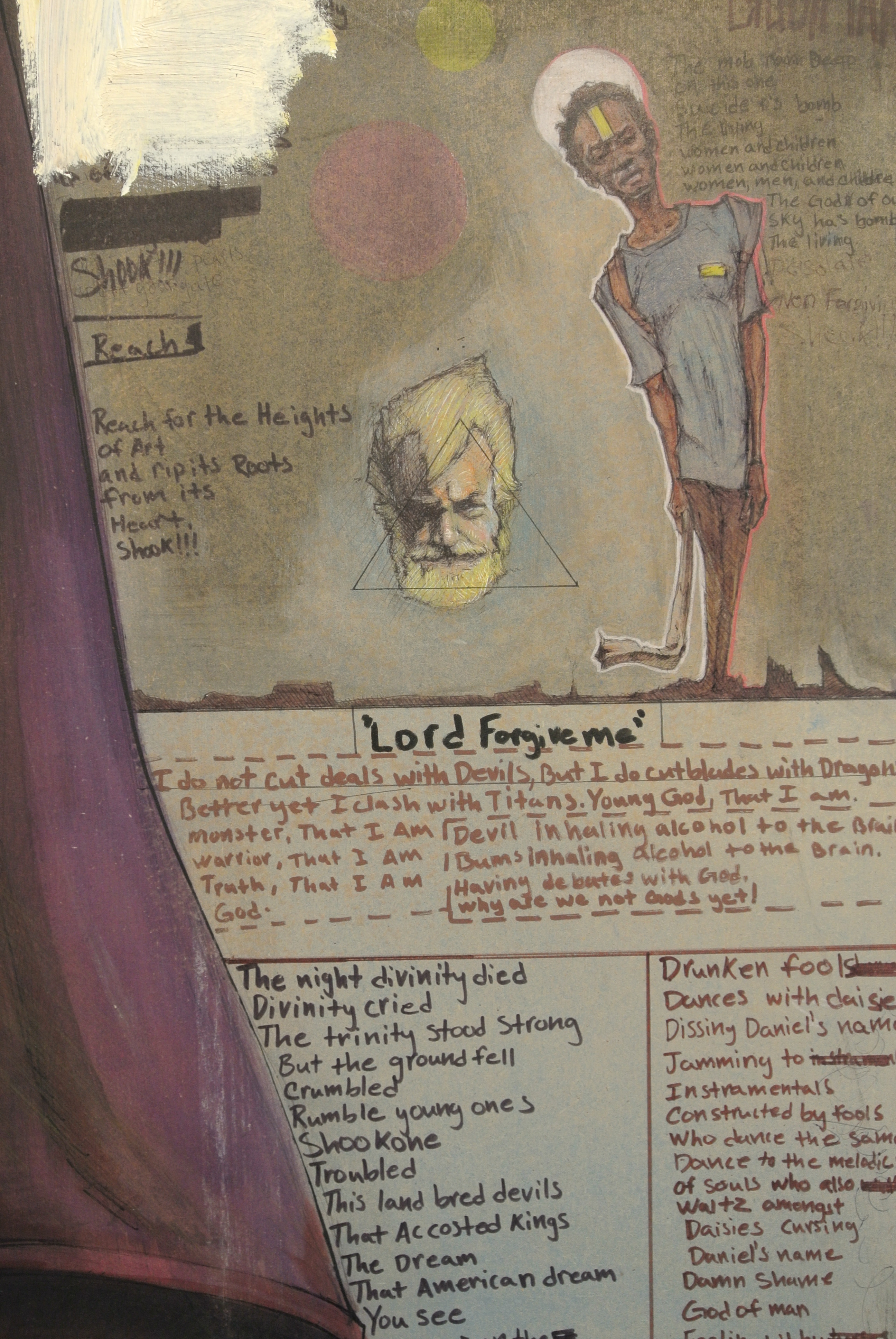 The artist clearly has an affinity for words as well as paint, and one of his earlier works in the show–Shookone from 2014–has substantial textual commentary incorporated into its background. But Holloway acknowledges that in his recent works, little or no text is included, and it seems as though for now the audio recordings have provided an outlet for his former way of storytelling. And this development leaves him more free to allow his painted images to speak for themselves, as they so eloquently do.

Through May 29 at Fort Works Art.