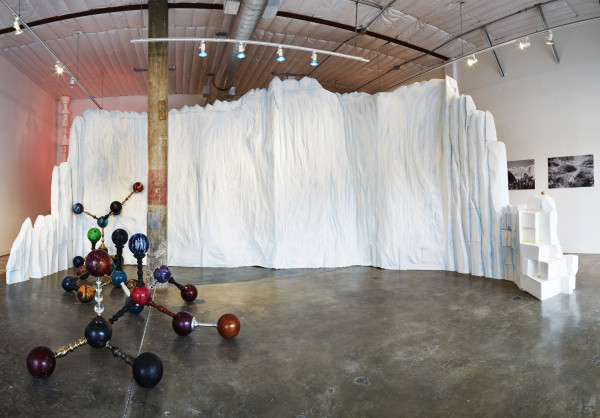 I’m confident you won’t misinterpret Jamie Panzer’s solo show If Love Is The Answer, What Is The Question: A Science Fair, currently at Big Medium in Austin. This isn’t because the show is full of standard or run-of-the-mill samplings you’ve seen too many times. It’s because there’s nothing in it that needs to be clearly or aggressively interpreted. Panzer gives you a collection of mix-media works that are as meaningful and complex as you want (or need) them to be, though in symphony they hint, darkly, at some things about the notion of change. But, laced with humor and ambiguity, the show mostly feels like a nearly arbitrary collection of unfinished projects that welcome your own filling in of the blanks. 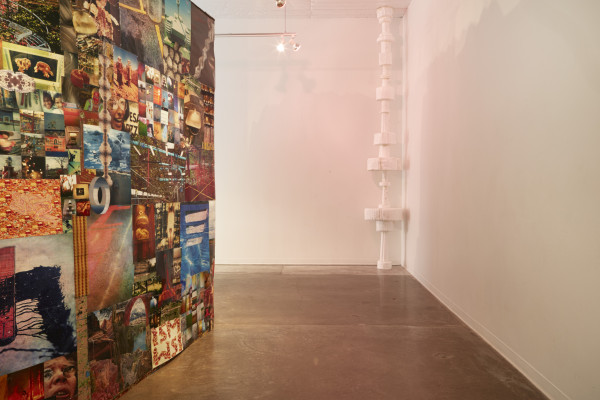 But the Austin-based Panzer has long been interested in the unresolvable. A scan of his portfolio turns up a variety of works that hover in the middle ground between the familiar and the… unusual. Objects and images as mundane as sawhorses and magazine ads are transformed into oddities that keep enough of their originality to be recognizable as themselves, but are also manipulated enough to introduce unsettling artificiality and malleability. Panzer’s work constantly reminds you that the things of the world are unsteady and open to theft. Nothing is safe from subversion. 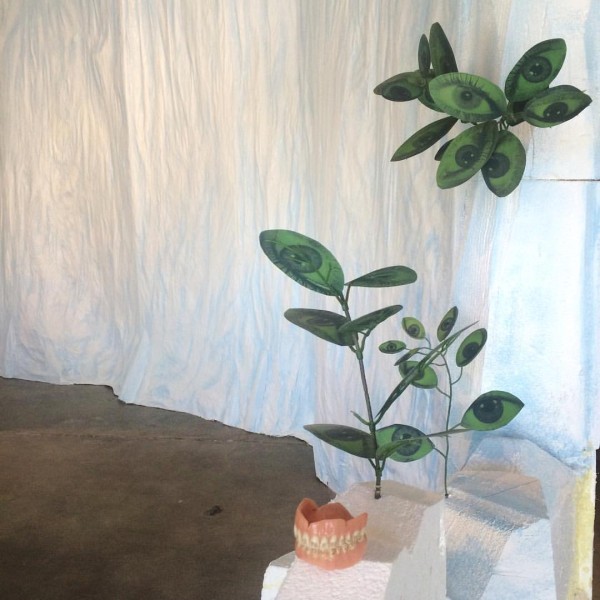 So, when you walk into his show at Big Medium, you should keep this in mind, and you’d do well to consider that Panzer also likes to undermine the assumed permanence of art exhibitions in general. We don’t expect the art to change once it’s installed in the gallery, and we rarely expect to meet an exhibition that changes shape over its run. But that’s what Panzer is doing here. On my second visit to Big Medium, some alterations to the show (from its opening-night form) were evident. For example: the three large paper sculptures that hung near the gallery door are gone. They were big paper chains with distorted images of sound waves resembling candlesticks attached to them. The images linked together along the curves of the paper, and their different abstractions played off of each other with each slow rotation of the work. Now, in their place, three lonely pieces of fishing line dangle from the ceiling. They’re so slight they’re almost completely unnoticeable. 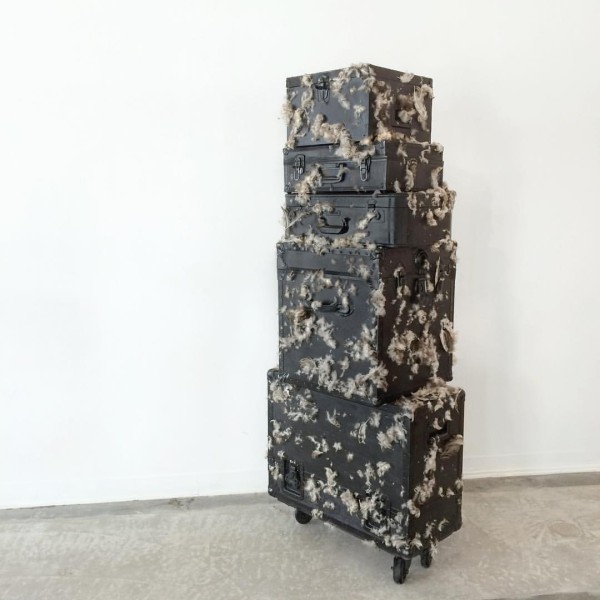 Another change: Five pieces of black luggage covered with feathers rest on top of each other with a large hole cut out of the top one. At the opening, that hole was used for a projector. I never saw the film. On opening night, when I arrived, the projector had malfunctioned and was displaying a blue screen with the error message: Restart Projector. The restart never happened. I watched Panzer and several members of Big Medium try to reanimate the film without success. Or they acted like they were trying. At the time, this felt like an unfortunate turn; a simple technological malfunction had gotten in the way of the art, but now I’m not entirely sure this wasn’t supposed to happen. When I revisited the gallery, I noted the sculpture had been unplugged and the projector removed. It seemed pre-destined. Like the paper chain sculptures, things were disappearing. Is this a slow de-install? Is it autobiographical? 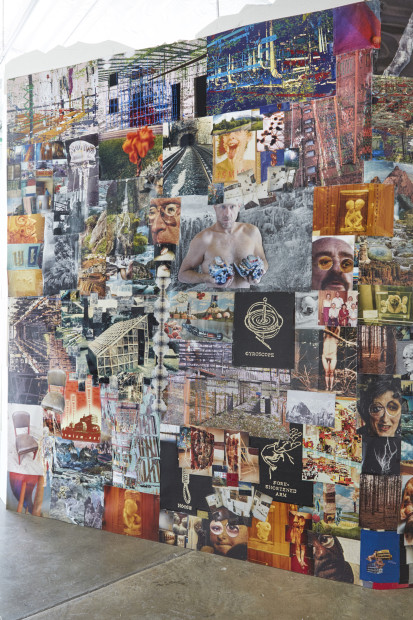 Change is foreshadowed in Panzer’s written statement about the show. In the long esoteric list of hashtags he’s included, several—such as #dotswillbeconnected and #malapropsglitchesrejectsflaws—describe actions presumably done as part of the show. If the projector is the glitch rejecting a flaw, then those connected dots seem to be at their highest concentration on Panzer’s collage work here. Not immediately visible, the collage covers the backside of what appears to be a towering wall of ice made out of papier-mâché. This sculpture dominates the space and divides it into two areas. The larger area is empty with the exception of a molecular arrangement of bowling balls and candlesticks; the smaller area behind the wall is a narrow corridor. Because of this monolith’s proximity to the nearest real wall, you can’t stand far enough back to take in the entirety of the collage. This seems by design. You’re confronted with a non-hierarchical and non-compositional melee of imagery ranging from personal photographs to commercial publication. Some repeat; others don’t, and I’m suspicious they’ve been changing through the run of the show also, but it isn’t obvious without photographic evidence. Spanning this built wall of overwhelming visual data, the collage elements also change the surface subtly, like slow-moving cracks through ice. 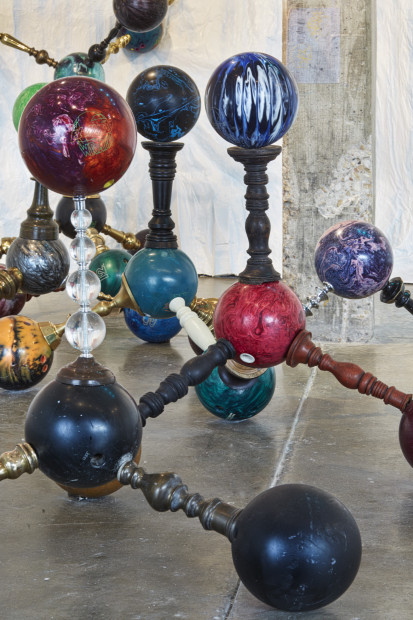 These changes—and others—seem to happen at glacier speed and are only noticeable with multiple viewings. By all accounts the closing on May 20th will be quite a spectacle, and I wonder what surprises Panzer has in store. Some might charge that constantly changing the exhibition is a gimmick,  but I disagree. These changes demonstrate the perpetual labor of artists, and the fact that good art is evolutionary. It moves and changes with its creator. Panzer seems to be communicating something about current or pending changes in himself. He might be asking us to move and change as well. Don’t worry if you can’t nail him or his meaning down. You’re not supposed to.

Jamie Panzer at Big Medium through May 20.

By George, I think you’ve got it…